In the last two months alone there have been several notable new routes launched between North and South America, including American Airlines linking Dallas/Fort Worth to Bogota, Aerolineas Argentinas resuming flights to New York, and JetBlue Airways venturing into Peru for the first time. This January capacity is up over 9% on non-stop routes between North and South America.

Scheduled airline seat capacity between airports in North America and South America is up 9.2% this January compared with a year ago. The US-Brazil market remains by far the biggest, with almost twice as much capacity as between the US and Colombia, the #2 market. The Colombian market has had a good 12 months. Apart from US capacity to the country being up almost 20%, scheduled seat capacity from Mexico is up almost 60%. 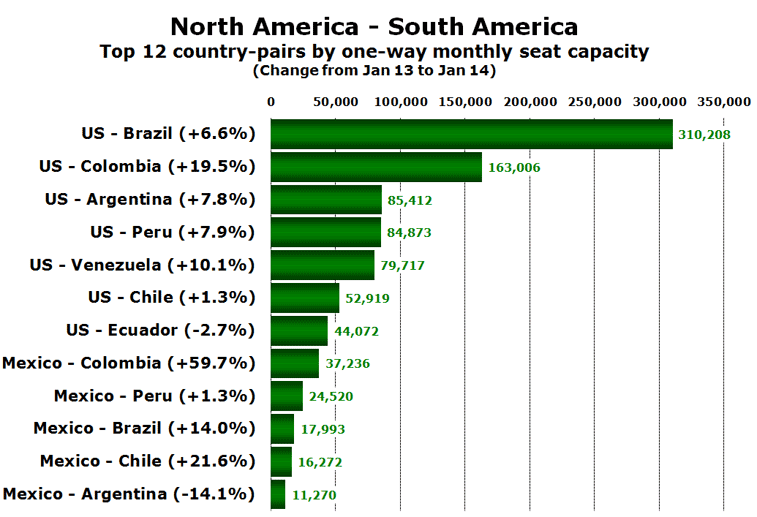 The largest South American market from Canada is Brazil, which ranks 13th, just ahead of the Canada-Chile market. The only country pair to gain a non-stop service that previously did not have one is Mexico-Ecuador, which since 16 December has been served by a non-stop flight between Mexico City and Quito, operated six-times weekly by Aeromexico.

Analysis of which airlines offer the most seat capacity on non-stop flights between North and South America reveals that, not surprisingly, American Airlines leads the way, and has extended its lead over its nearest rivals. The combined seat capacity of Avianca, LAN Airlines and TAM Airlines still falls short of what American provides in the market. 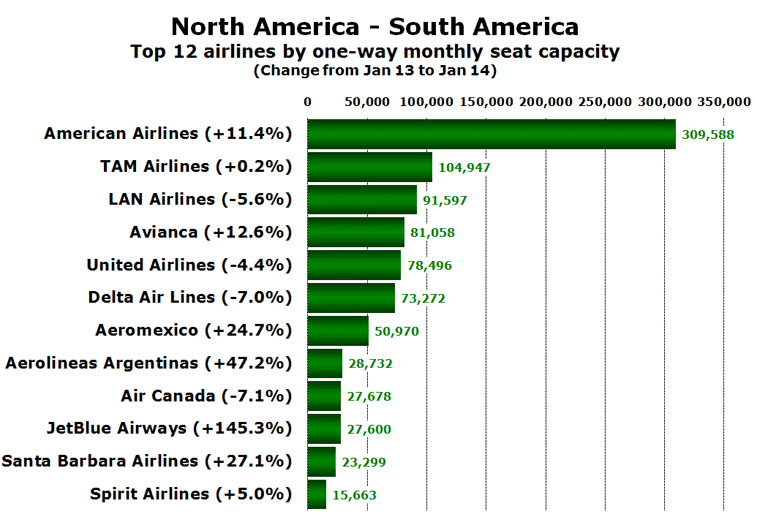 Tenth-ranked JetBlue Airways is the fastest-growing airline in this market, having added new direct flights between Fort Lauderdale and Lima and Medellin, and increased frequency on its other three routes as well. Aerolineas Argentinas has seen significant growth thanks to the resumption in mid-December of non-stop flights between Buenos Aires and New York.