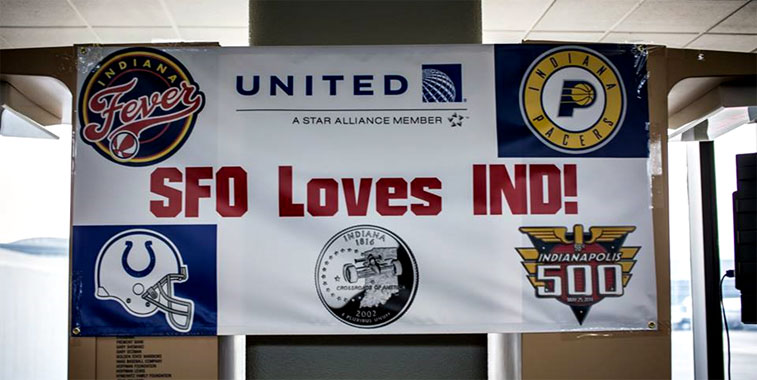 Clearly United Airlines is hoping that San Francisco-based sports fans will have several reasons to travel to Indianapolis on its new daily connection, including the world famous Indianapolis 500, a 500-mile IndyCar Series race typically held at the end of May over Memorial Day weekend.

Serving the capital city, as well as the biggest city in Indiana, Indianapolis Airport has been in a period of transition since 2005, as the facility (along with many others across the US) has had to come to terms with the effects of US major airline consolidation. The airport is currently ranked as the 48th largest in the US (Source: RITA/BTS), in terms of passenger figures for the 12 months ending September 2013. 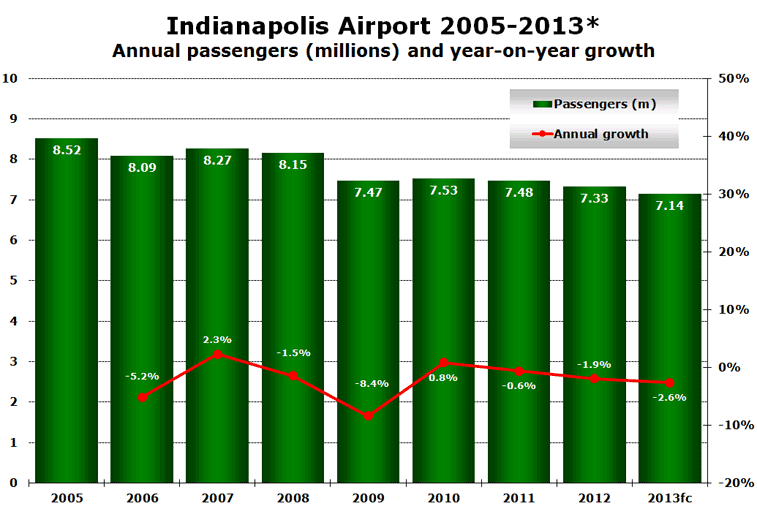 In the first 11 months of 2013, the largest carrier had become Delta, processing 1.77m passengers, considerably less than the 2.67m (December 2013’s figures are unlikely to bridge the gap) combined annual traffic of Delta and Northwest (the latter was merged into the former in October 2008) for 2005. Southwest is now the #2 airline at the airport (1.15m). However, if AirTran’s (acquired by Southwest in May 2011) 2013 figures are included in its total (0.74m), it would actually be Indianapolis’ #1 airline in terms of passenger numbers. Bucking the consolidation trend is the current #3 carrier United, which with 1.02m passengers for January to November 2013, should see it surpass the combined 2005 figure (1.08m) for United and Continental (the latter was merged into United in October 2010) when December’s figures are added in. Finally, the number two carrier in 2005, US Airways (which swallowed up America West in 2005), will probably finish 2013 around 100-200,000 passengers lower than the combined figure for the two separate airlines recorded in 2005. The merged entity American Airlines/US Airways generated 1.63m passengers in the first 11 months of 2013, and will therefore oust United from #3 spot, although any consolidation imposed by these two carriers post-merger is uncertain at this time.

Evidence of the impact of the period of consolidation can be found in the quarterly Domestic Airline Fares Consumer Reports produced by the US Department of Transport. Typically, airports with high levels of LCC or predominantly leisure traffic will come close to the bottom of the ranking of around 120 US airports, with airports served in the main by the US majors or with high shares of business traffic coming close to the top of the table. 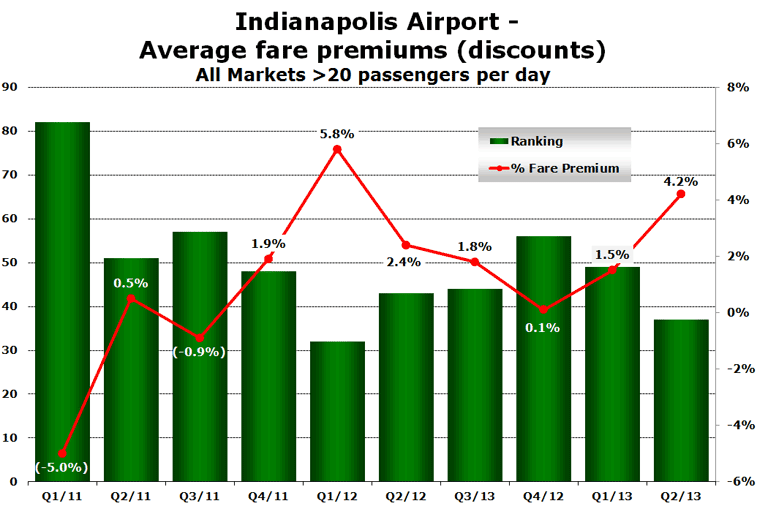 Source: US Department of Transport

Looking at the last 10 quarters of data available, the Indianapolis market has attracted a fare premium in eight of those quarters, with its ranking being as high as #32 in Q1 of 2012, and as low as #82 in Q1 of 2011 (average position over these 10 quarters was #50, making it slightly above average). On this basis, new entrants to the Indianapolis market can be reasonably confident in extracting a yield premium for any new routes.

Currently, Indianapolis has just eight serving carriers (assuming regional airlines as their parent-brand only). With the exception of Southwest/AirTran, the airport has no LCC presence. Given the airport’s lack of growth since 2005, it will be interesting to see whether the airport’s owners will have to at some point ‘do a deal’ to bring in another LCC in order to kick-start the traffic figures again. According to Innovata / Diio Mi information, Allegiant Air is the only other LCC present in the whole of Indiana, with limited services from Fort Wayne (FWA) and South Bend (SBN). 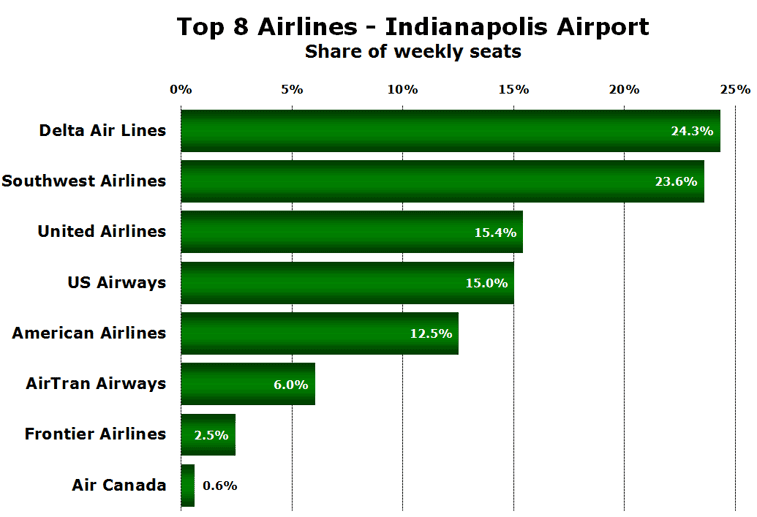 When compared to the same week in 2013, Delta has marginally reduced its capacity commitment to the airport (-2.1%), whereas Southwest has posted the most dramatic growth (+39.3%) of the top eight airlines, although this is at the cost of AirTran (-46.2%). The three remaining serving majors — American, United and US Airways — have all grown in the last 12 months, posting figures of +17.1%, +7.2% and +3.7% respectively. Overall weekly seats have grown by close to 4% year-on-year.

The fastest growing route at Indianapolis over the last 12 months was the route to Fort Myers in Florida, which saw a 25% increase in seats year-on-year. Although Delta has entered the market in 2014, with a single weekly rotation, it is the switch from AirTran’s 717 thrice-daily operation to Southwest’s 737 thrice-daily service that is the main reason for this spike in seats. Capacity to Detroit has witnessed the biggest fall since last January (-13.4%), mainly as a result of Delta’s larger MD-88 equipment being replaced by smaller regional types, although weekly frequencies have also been trimmed from 43 to 42. 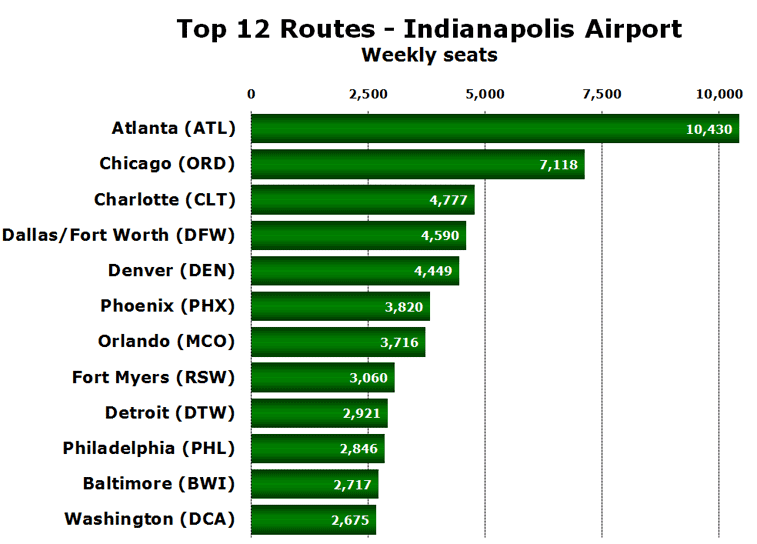 Despite being called an ‘international’ airport, overseas flights are few and far between, with only three non-US destinations available – namely to Cancún, Montego Bay and Toronto. Interestingly, these routes represent three of the four smallest routes served at Indianapolis, with the fourth being the domestic route to Memphis. The top 12 routes represent 65.2% of weekly seats in 2014, a slight drop from the 66.3% figure achieved in 2013.