Influence of Etihad Airways already showing: This week has seen the launch of a new daily service from Chennai to Abu Dhabi, the home airport of Etihad Airways, bringing to four the number of Indian airports that Jet Airways now serves to Abu Dhabi. Jet Airways’ international network comprises just 20 destinations, its 21st international route, and first-ever service to Paris, will begin on 14 May.

These are interesting times for India’s Jet Airways. The announcement last week that the airline’s most recent CEO, former Air New Zealand boss Gary Toomey, had resigned with immediate effect after less than four months in charge, could be considered a worrying sign. According to an analysis by Airline Weekly of airline share prices in 2013, it emerged that only fellow Indian carriers SpiceJet and Kingfisher (despite no longer flying) reported a steeper decline in share price than Jet Airways’ minus 50%. Admittedly, foreign exchange rate issues, something airline have no control over, were a major cause of Indian carriers performing particularly poorly. On the up side is the fact that Etihad Airways was finally able to conclude its purchase of a 24% stake in the airline, which remains a leading player in the Indian market, and is currently celebrating ’20 years of excellence’.

#2 in the Indian domestic market with 25% share; bye bye Bhubaneswar

According to figures from the DGCA, Jet Airways (including JetKonnect) has around 25% of the Indian domestic market in 2013, second only to IndiGo’s 30%. Based on figures for January to November, anna.aero estimates that Jet Airways will have carried around 11.3 million domestic passengers in 2013 at an average load factor of 71%, while JetKonnect (still referred to as JetLite by DGCA) will have carried 3.5 million passengers at a load factor of around 73%. 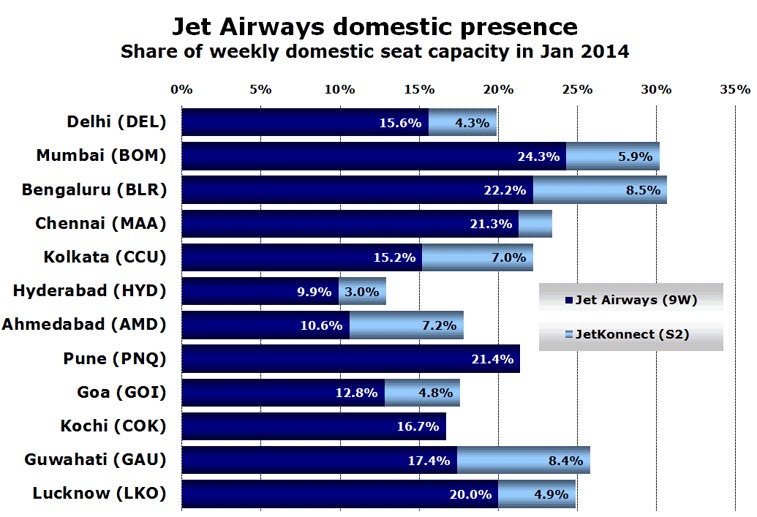 Based on current schedule data, Jet Airways (including JetKonnect) has over 15% of domestic seat capacity at 11 of India’s top 12 domestic airports, but over 30% at just two, Mumbai and Bengaluru. In Delhi, the airline ranks third after IndiGo and Air India. Analysis of schedule data reveals that during the last 12 months Jet Airways and JetKonnect have both dropped four domestic routes each.

On four of the eight routes, Jet Airways has maintained a presence with its ‘other airline’. The biggest decision by the airline appears to have been to terminate all flights at Bhubaneswar in eastern India at the end of the summer 2013 season, with the axing of daily services from Bengaluru, Kolkata and Mumbai.

#2 international airline in India; new Paris route starting in May

While demand for domestic air travel has only recently returned to the levels of 2011, international traffic at Indian airports has grown year-on-year in 77 of the last 82 months (going back to January 2007), and in the period April to October 2013, international passenger numbers have risen 12% when compared with the same period in 2012. 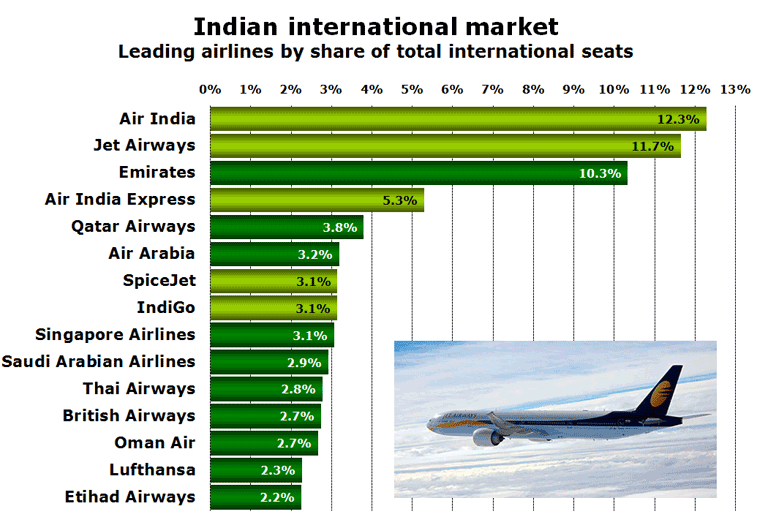 Analysis of current schedule data for international routes from Indian airports reveals that Jet Airways has around 12% of seat capacity, marginally behind Air India, and not that far ahead of Emirates. Indian carriers (in pale green) account for only 35% of seat capacity on international routes, though SpiceJet (+52%) is the fastest-growing airline in the top 12. Jet Airways’ international network currently comprises just 20 destinations, served by around 60 daily flights. Dubai (49 weekly flights), Singapore (42), Abu Dhabi (39) and Bangkok (35) are the most frequently served non-Indian airports. Brussels ranks top among the limited European destinations with 28 weekly flights, but this is thanks to the airline’s small ‘scissor hub’ which sees it serve New York Newark and Toronto Pearson with daily flights via Brussels, using aircraft originating in Delhi and Mumbai. The airline’s European routes to Brussels and London Heathrow (twice-daily from Mumbai and daily from Delhi), will soon be joined by Jet Airways’ first ever service to Paris CDG, its 21st international destination. Daily flights from Mumbai are scheduled to begin on 14 May using the airline’s A330-200s. 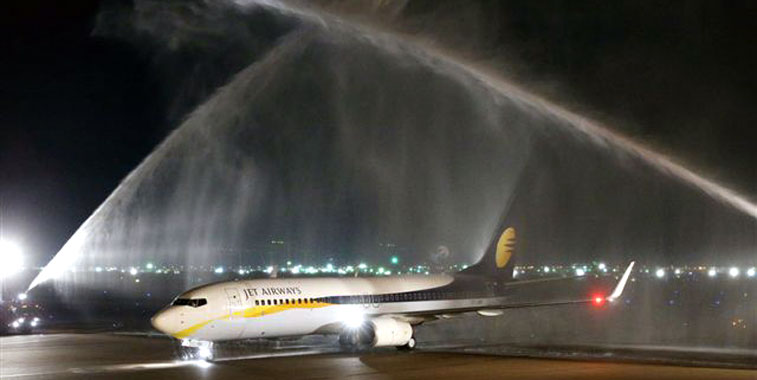 This Fire Truck Water Arch for the new daily service from Chennai to Abu Dhabi is also a contestant in this week’s anna.aero “Arch of Triumph.”

This week has seen the launch of a new daily service from Chennai to Abu Dhabi, the home airport of Etihad. This brings to four the number of Indian airports that Jet Airways now serves with non-stop flights to Abu Dhabi. In another recent development, it was announced by Etihad that from 1 March it will be leasing two 777-300ERs from Jet Airways to operate daily flights from Abu Dhabi to New York JFK, with Jet Airways becoming the designated operator from 1 May.