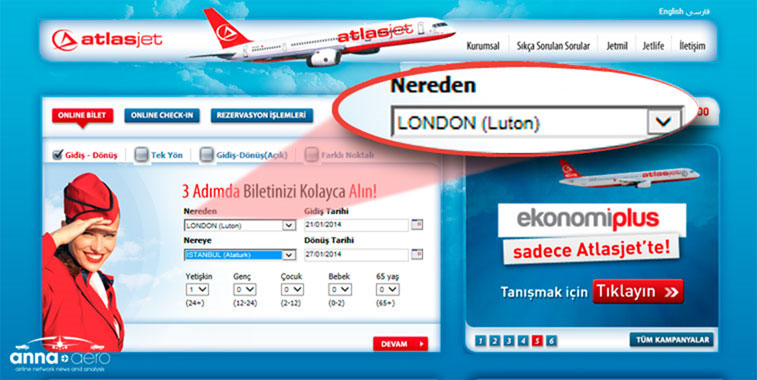 Four new routes appear in Atlasjet’s booking tool from London Luton, including a four times weekly Istanbul Atatürk operation, with connections onto Ercan in Northern Cyprus. Flights to Antalya and Izmir are available in the drop-down box but not bookable at the time of writing.

London Luton Airport has won the latest ‘Battle of Britain’, securing Atlasjet for the S14 season, beating off competition from fellow UK capital airports London Stansted and London Gatwick to become the only UK scheduled destination for the Turkish airline. Sure to have featured in the airline’s thinking in selecting Luton, Atlasjet’s planned services will avoid direct competition in the London-Istanbul market against the existing operations into London Gatwick, London Heathrow and London Stansted.

Flights into Luton are planned to begin on 2 May, with a four times weekly service from Istanbul Atatürk, with each returning flight offering connections on to Ercan in Northern Cyprus. The schedule to both destinations is expected to be ramped up to daily from 1 June. At the time of writing, both Antalya and Izmir were listed on the airline’s website as destinations from Luton, but no dates were available to make bookings and it was not clear whether these routes would involve a flight transfer at Atatürk.

Entry into a congested market

Looking at the Innovata / Diio Mi schedules for 10-16 April, Atlasjet will be entering a congested UK-Istanbul market against three incumbents — British Airways, Pegasus Airlines and Turkish Airlines. Of the 126 weekly frequencies between the UK and Istanbul, 75% of the services are flown into the three existing London airports. Assuming no further capacity increases and taking Atlasjet’s June daily schedule, the carrier will deliver just 6.9% of the Istanbul-London flights and 5.3% of the UK-Istanbul flights.

Unsurprisingly, Turkish Airlines is the clear market leader, serving six airport pairs and commanding 71.6% of seat capacity during the week being analysed. Coming a distant second is BA with 17.4% of the 24,000 weekly seats available, with Pegasus offering the remaining 11.0% courtesy of its double-daily Istanbul Sabiha Gökçen to London Stansted link. Atlasjet seems destined therefore to take the #4 spot in the market — out of four airlines.

Over the past few years, Atlasjet has tried and failed with services at two other UK airports — namely Manchester and Stansted, with the latter being last served just 12 months ago.

This piece of route development news will reflect well on Luton’s business development team, especially with new owners to impress in Madrid – namely Aena (along with private investment company Ardian).