Portugal’s own participation in the World Cup finals went down to the wire when it beat Sweden in the November play-offs, making it one of 13 European countries to compete in Brazil. In contrast to Portugal’s struggling economy, TAP Portugal will grow its network by 10 destinations in 2014, with two new Brazilian destinations (Belem and Manaus) launching in June.

For a government-owned flag-carrier operating in one of Europe’s most economically challenged countries, TAP Portugal had a surprisingly good 2013. Passenger number were up 5% to an all-time high of 10.7 million, and the annual load factor reached 79.4%, another company record. European traffic growth led the way, growing by 443,000 passengers (+7.2%) while domestic traffic was up just 1%. To round off an impressive year, at the end of 2013, the airline announced plans to serve 10 new destinations in 2014, including two in Brazil, which will be appreciated by football fans across Europe. 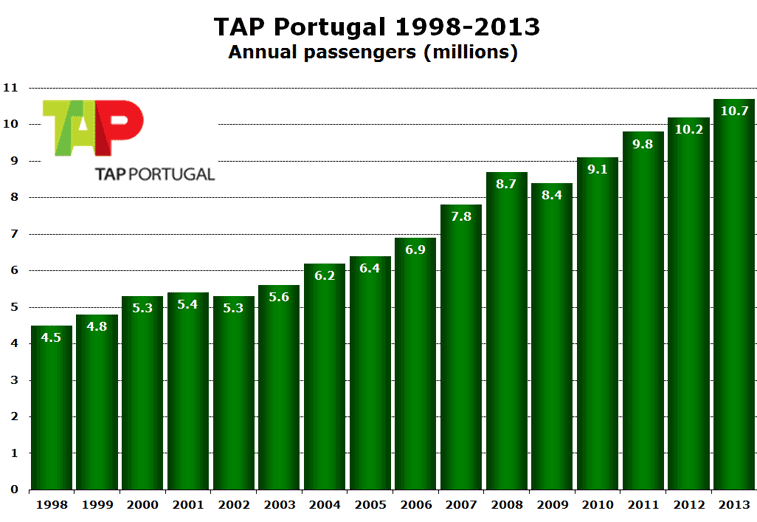 The airline’s fleet (including that of its fully-owned subsidiary Portugalia) currently comprises 16 wide-body Airbus aircraft, 39 A320-series aircraft, six Fokker 100s, eight Embraer ERJ 145s and two Beechcraft 1900Ds. According to Airbus, the airline’s only orders for new aircraft are for 12 A350-900s.

During 2013, TAP launched only two new services from Lisbon, to Boa Vista (Cape Verde) and Tangier (Morocco) while dropping flights to Milan Linate and Turin. The airline’s growth was achieved with no additional aircraft, and primarily through an increase in load factor. However, before Christmas, TAP Portugal’s CEO Fernando Pinto announced plans to grow the airline’s network by a further 10 destinations in 2014, with two new Brazilian destinations (Belem and Manaus) launching in June, and a further eight new routes starting in early July.

The addition of Hannover brings to six the number of destinations served in Germany; after Berlin, Düsseldorf, Frankfurt, Hamburg and Munich. In 2013, TAP Portugal transported 627,000 passengers on its German routes, representing growth of 18%. The new Hannover route, plus increases in frequencies on the existing routes, means that capacity will be up 22% between the two countries in 2014.

Total weekly seat capacity across the whole network is set to grow this summer by around 8%, with ASKs on track to grow by closer to 12%, thanks to the introduction of the new long-haul routes. Destinations served with at least four daily flights this summer from Lisbon are Barcelona, Brussels, Funchal (Madeira), London Heathrow, Madrid, Milan Malpensa, Paris Orly, Porto and Rome Fiumicino, as well as between Porto and Paris Orly.

This June TAP Portugal will be flying almost twice as many weekly seats between Europe and Brazil as any other airline, offering non-stop flights to 11 Brazilian cities from Lisbon (plus Belem via Manaus), plus two routes to Brazil from Porto. These long-haul routes to Brazil account for just over one-third of the airline’s capacity this summer, if measured by ASKs (Available Seat-Kilometres).

Portugal’s own participation in the World Cup finals relied on beating Sweden in a play-off in November, which they achieved thanks to the goal-scoring skills of their star player Cristiano Ronaldo. Portugal thus becomes one of 13 European countries to compete in Brazil, with fans from Belgium, Bosnia & Herzegovina, Croatia, England, France, Germany, Greece, Italy, Netherlands, Russia, Spain and Switzerland, all potential customers for the airline’s South American services. 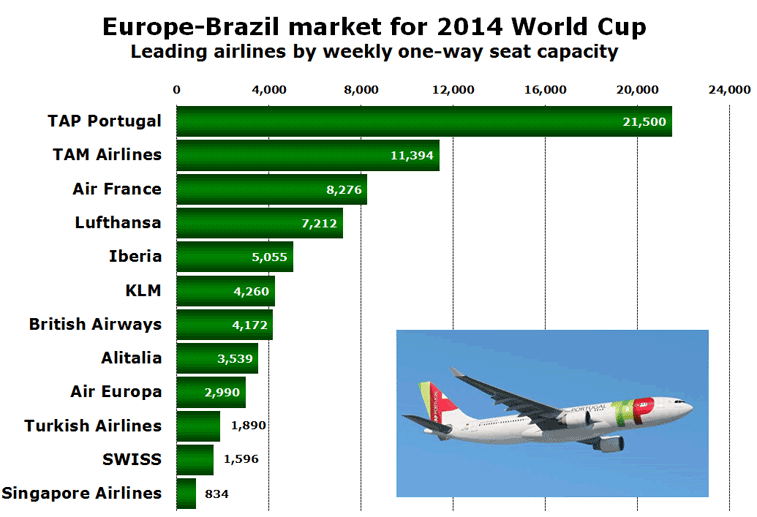 TAP Portugal offers almost twice as many weekly seats between Europe and Brazil as fellow current Star Alliance member TAM Airlines (though TAM joins oneworld at the end of March), with Air France and Lufthansa the next biggest operators in the market. While TAM’s weekly seat capacity is actually down 6.6% this June, TAP Portugal’s is up 11%. The airline will be keen to maximise its impressive links to Brazil this summer, especially while the World Cup is taking place from 12 June to 13 July.