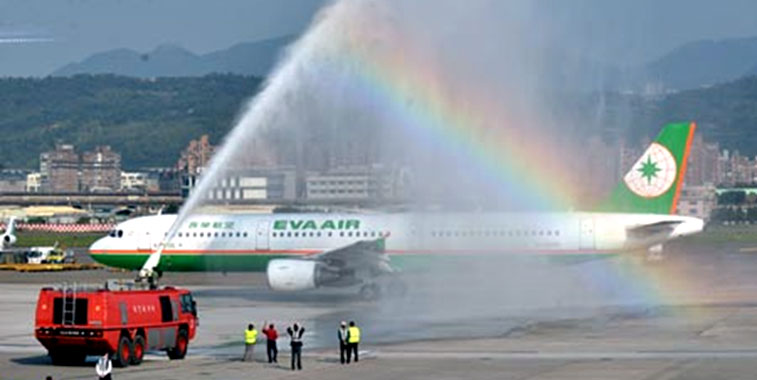 Greeted with half water arch, half rainbow upon arrival in Shanghai Pudong on 7 January, UNI Air’s thrice-weekly services from Taipei Songshan will be operated utilising A321s from its parent company EVA Air. The carrier now serves a total of 14 destinations in Mainland China.

UNI Air is a Taiwanese airline based in Zhongshan, Taipei, Taiwan, born following the merger of UNI Airways, Great China Airlines and Taiwan Airways in 1998. A domestic and regional subsidiary of EVA Air, the carrier has recently started to expand its international presence, especially given the relative maturity of the domestic Taiwanese market. The airline operates a mixed fleet of six ATR 72s, eight Q300s and six MD90s, and could surpass its best passenger traffic result in 2013, as weekly international capacity data for August 2013 (9,988 seats) shows the highest amount of seats since its previous high in 2012 (9,342 seats).

Having carried over three million passengers in 2012, representing a slight decrease of 0.2% over 2011 figures, the airline had its sights on further international growth in 2013, with new routes launched to Changsha and Guangzhou in China on 4 May. Furthermore, with the most popular new addition to the airline’s international network – the thrice-weekly services from Taipei Songshan to Shanghai Pudong launched on 7 January 2014 – UNI Air is now serving a total of 14 destinations in Mainland China. Even though the traffic declined in 2012, the carrier did not have a bad year when compared to 2011, as ASKs went up by 14%, cargo increased by 19% and the load factor grew by 1.3 percentage points to over 73%. 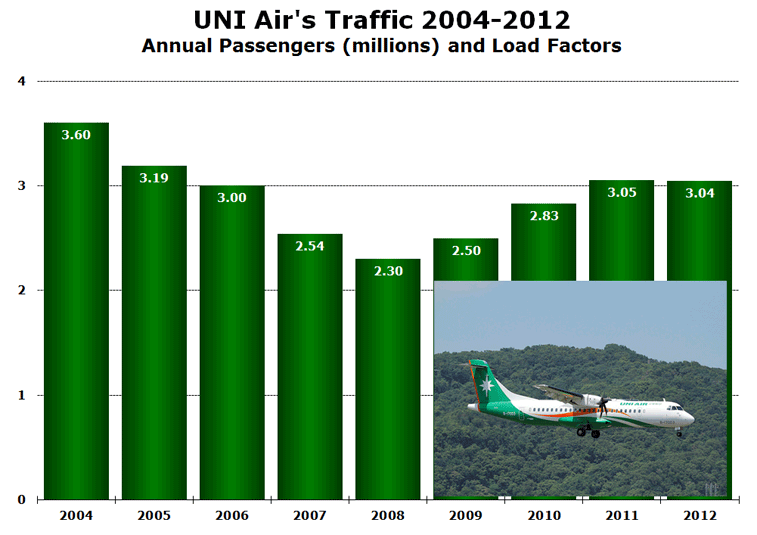 After a period of operational rationalisation in the middle part of the last decade, UNI Air consolidated its annual passenger performance over the last four years after the restoration of air links between China and Taiwan in December 2008. Indeed, its load factors over this period peaked in 2010 at 76%, recovering from the low of 67% in 2004, the year in which it delivered the highest overall passenger traffic.

Following the defrosting of relations between China and Taiwan, cross-strait services have become an important element of UNI Air’s international growth strategy. Therefore, out of the top 13 routes, 11 are services operated to Mainland China, with Taipei Taoyuan – Shenzhen maintaining its top position in 2014 and accounting for 13% of all weekly international seats. The two remaining routes serve the Vietnamese market from Kaohsiung (and are highlighted in the chart below). 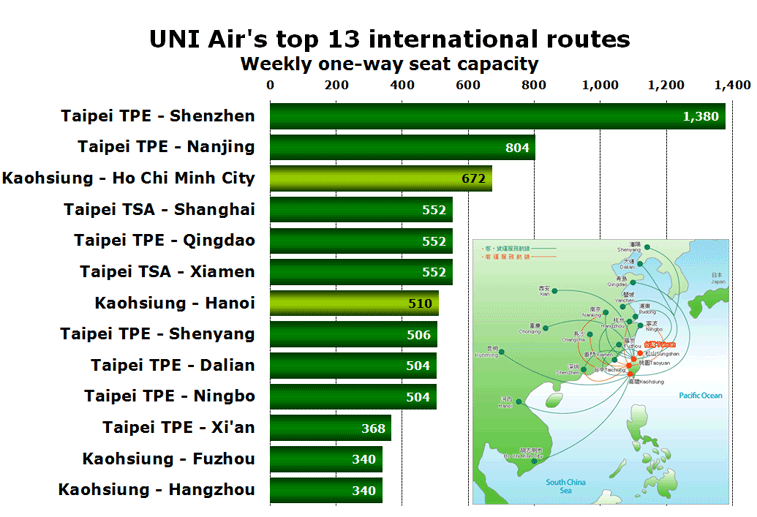 Weekly international seat capacity has slightly increased by 0.3%, with eight out of 13 services recording growth, when comparing data from this January with the same week last year. The stand out performance is that emanating from Taipei Songshan – Xiamen, which experienced double-digit growth of 21%, while the 1,865-kilometre sector between Taipei Taoyuan and Shenyang provided the greatest capacity decrease (-7%). Overall, the top 13 international routes in UNI Air’s network are relatively stable. Nonetheless, not every international service has been an unqualified success, with the airline withdrawing the daily services between Taichung and Macau in February 2013.

Looking at UNI Air’s flying programme for the same week four years ago, the ability to provide more cross-strait services into China triggered the most market growth, as weekly seat capacity has been increased by 145% in January 2014. In the same period, capacity to the Vietnamese market has grown by 56%.