Air China expansion to include Washington this summer; almost 78 million passengers carried in 2013 at 81% load factor Having launched Houston service last July, and with plans to serve Washington from this June, Air China last week added Honolulu to its US network with the introduction of thrice-weekly flights from Beijing. The airline currently serves 40 non-domestic destinations non-stop from China’s biggest airport.

In 2013, Air China saw its passenger numbers grow by 7.3% to 77.7 million, pretty much guaranteeing itself a place in the top 10 of world airlines based on that criteria. These figures include passengers carried on its subsidiaries Air Macau, Dalian Airlines, Kunming Airlines and Shenzhen Airlines. Out of the almost 78 million passengers carried, 65 million, or 85% of the total, were flown on domestic routes, almost four million on routes to Hong Kong, Macau and Taiwan, and almost eight million on other international routes. All this was achieved on a fleet of now almost 500 aircraft, including the 1,000th Airbus to be delivered to a Chinese airline.

Based on schedule data for the week commencing 4 February 2014, there are around 315 routes operated under the Air China code (CA). This includes a number of seasonal flights which operate to serve passengers wishing to meet up with family and friends to celebrate the Chinese New Year, which this year is commemorated on Friday 31 January. 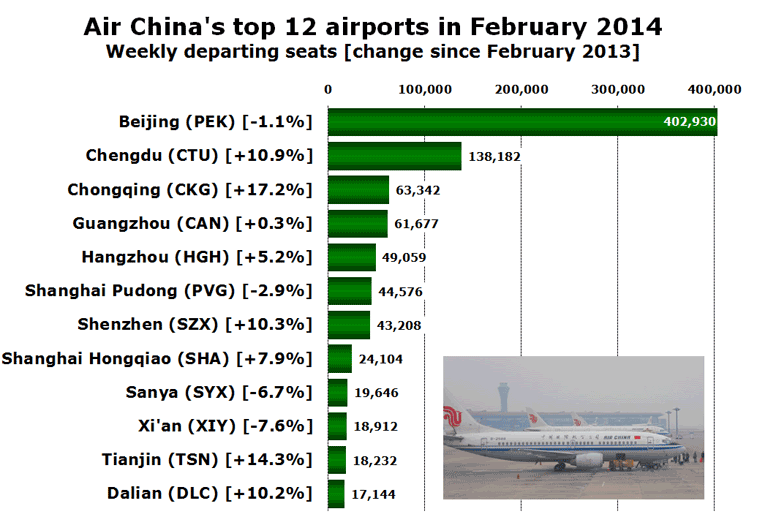 Not surprisingly, as the country’s designated ‘flag-carrier’ Air China’s biggest base of operation is Beijing, from where it offers almost three times as many weekly seats as at its next biggest airport, Chengdu. Out of the top 12 airports, Air China has grown seat capacity by more than 10% in the last year at five of them with Chongqing (+17.2%) and Tianjin (+14.3%) the fastest-growing. In all, Air China is serving 151 airports worldwide in February.

A new service linking the capitals of China and the USA is planned to start on 10 June (subject to US government approval), with the introduction of four weekly flights to Washington Dulles using a 777-300ER. Another development is the news that Air China will resume flights from Beijing to London Gatwick from 30 March 2014. Flights will operate four times weekly using an A330-200. The route was first launched on 2 May 2012, but was suspended at the end of October 2013. This summer will also see the resumption of flights to Vienna, and Barcelona added as a new destination, both from Beijing, while Shanghai will get a non-stop service to Munich.