From the new … to the well established. Etihad Regional is the new brand name for Darwin Airline’s operations centred on Switzerland, which will see around 20 new route launches over the summer. Meanwhile, Eastern Airways (founded in 1997) has already launched new domestic flights this year in the UK (from Leeds Bradford to Southampton, pictured) and in France.

It’s not easy being a regional airline in Europe. Mind you, that depends on your definition of a regional airline, since it could be argued that Ryanair is a regional airline as it operates to many regional (not to say downright remote) areas in Europe. However, for the purposes of this week’s anna.aero analysis it is assumed that regional services are those that are operated by aircraft of 80 or fewer seats. This will then include all turboprop aircraft as well as smaller jets. According to available schedule data for April, there are over 1,500 intra-European air services (routes) operated by aircraft with fewer than 80 seats. The top 15 airlines operating these services, as analysed by marketing code (as opposed to operating code) reveals that flybe, is indeed, Europe’s largest regional airline, even though this does not include the flights operated by the airline’s 25 Embraer E175s and E195s. Even so, with a fleet of over 40 Q400s, its Loganair franchise operations, and its Nordic operations using ATRs, flybe still easily tops the rankings based on weekly seats (though measured by flights it only beats Widerøe by 12; 2,658 to 2,646). 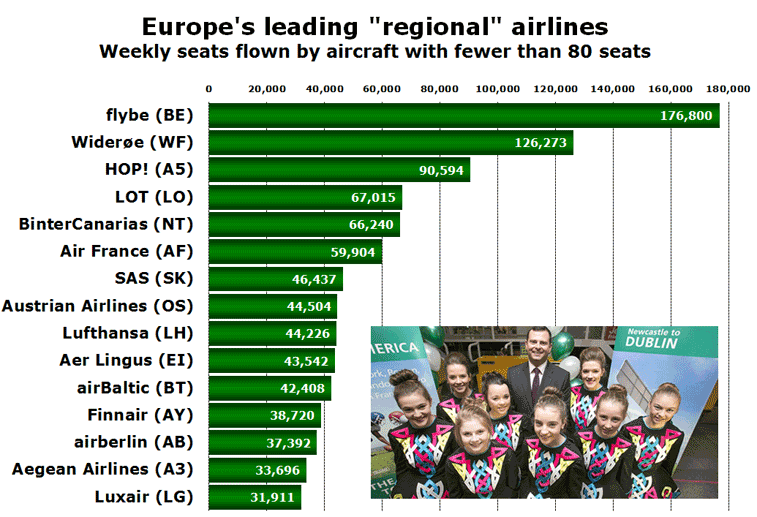 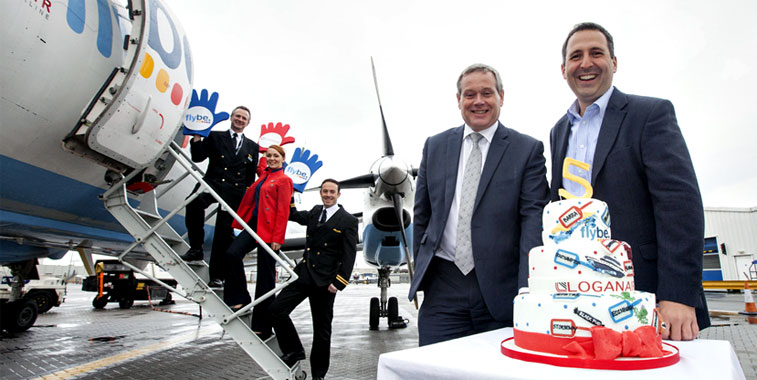 In mid-December flybe celebrated the fifth anniversary of its franchise arrangement with Scottish carrier Loganair. In that time just over 2.5 million passengers have flown on Loganair flights operating under the flybe brand. Seen celebrating the event with a fabulous looking cake are Phil Preston, Chief Operating Officer of Loganair (left of cake), and Fred Kochak, Director of Route Performance at flybe (right of cake). Loganair has helped flybe remain Europe’s #1 regional airline despite some recent pruning of the network.

It may be surprising that the majority of these top 15 regional airlines are either flag-carriers, or subsidiaries of flag-carriers, even though some of the capacity may be operated by independent carriers, such as in the case of Aer Lingus, which contracts Aer Arann to operate flights on its behalf branded as Aer Lingus Regional. Aegean Airlines appears in this list as a result of its merger with Olympic Air.

Since the beginning of the year there have been a number of significant new route launches involving some of Europe’s smaller regional airlines. Ignoring seasonal ski routes we have identified the following new routes that have either started, or are scheduled to start, before the beginning of the summer season at the end of March.

These routes involve airports in Belgium, France, Germany, Norway, Sweden, Switzerland and the UK suggesting plenty of perceived opportunities right across Europe. In the case of the two CityJet routes, these are replacing services previously provided by flybe.

The following is a brief overview of some of the recent network-related activities at a selection of Europe’s regional airlines.

The European market is a tough one for independent regional airlines as the demise in recent years of the likes of City Airline of Sweden (which was absorbed by Skyways in 2011 before the latter also ceased operations in 2012), and flybaboo, the Swiss regional which was partly absorbed by Darwin Airline, demonstrates. Other carriers to have ceased operations in the last 12 months whose fleets included some aircraft with less than 80 seats include Belle Air of Albania, while other carriers such as Air Dolomiti of Italy and Romania’s Carpatair stopped operating any aircraft with less than 80 seats.