Flights up 15% and ASKs up 5.9% between Asia and Australasia; Singapore – Australia #1 country pair Several new routes were launched in the last two months between Asia and Australasia, including AirAsia X’s and Malaysia Airlines’ services from Kuala Lumpur to Adelaide and Darwin respectively. Overall, capacity is up 7.6% on non-stop routes between the two regions this January.

According to Innovata, flights between Asia and Australasia have experienced double-digit growth of 15% in the last 12 months, with precisely 1,100 flights being operated between the two regions. In the same timeframe, weekly departing seats have increased by 7.6%, with ASKs up by 5.9% to 1.9 billion ASKs being offered this January.

The top 12 country pairs represent over 88% of all flights provided between the two regions, which has slightly increased from the 87% recorded for the same week last year. Singapore – Australia has managed to maintain its top position in 2014, with services between the two country markets increasing by 8.4% to 244 weekly flights. Both Jetstar Asia and Tigerair Singapore have expanded hugely in the last 12 months, increasing their flights to Perth from daily to twice-daily. Overall, the 2014 ranking is relatively stable with no new entrants in the top dozen since last January, although there have been movers in that time. Notably, country pair Hong Kong – Australia provided 3.9% less weekly flights this January and dropped one position. 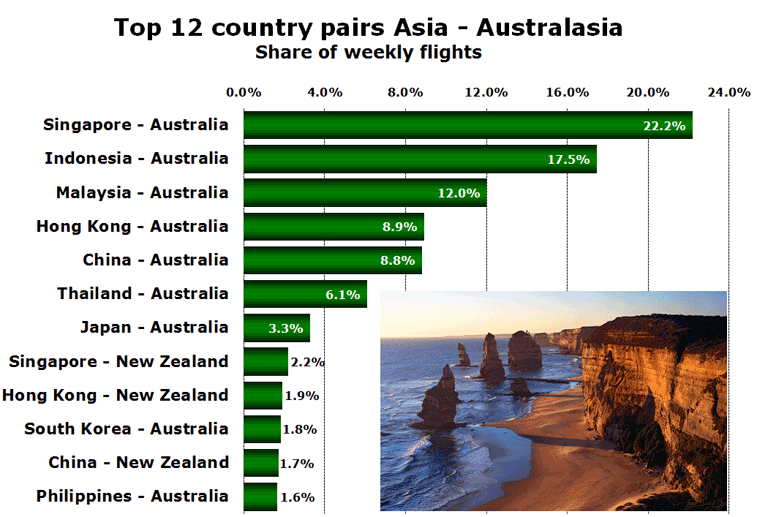 In fact, seven out of the 12 country pairs experienced growth, when comparing data from January with the same week last year. The stand out performance is that emanating from the Malaysia – Australia country pair, which noted a yearly increase of 44%. This impressive growth was due in part to AirAsia X, which made Adelaide its fifth Australian destination from Kuala Lumpur with the launch of five weekly services on 30 October, and Malaysia Airlines’ daily flights to Darwin launched on 1 November. On the other hand, services between South Korea and Australia provided the greatest decrease (-13%), as a result of Korean Air withdrawing its twice-weekly services from Seoul Incheon to Melbourne.

Singapore is by far the most popular origin destination for services to Australasia, being featured in the first three routes between the two regions. In fact, the three routes also referred to as ‘Kangaroo Routes’ are meant to feed the Australian traffic to Europe via Singapore. The top 12 city pairs currently command 49% of the total market, which represents the same share as in the corresponding week of 2013. One new entrant has made it into this year’s ranking, namely the services between Shanghai Pudong and Sydney, which posted double-digit growth of 16% due to China Eastern Airlines increasing its flights from nine times weekly to twice-daily. 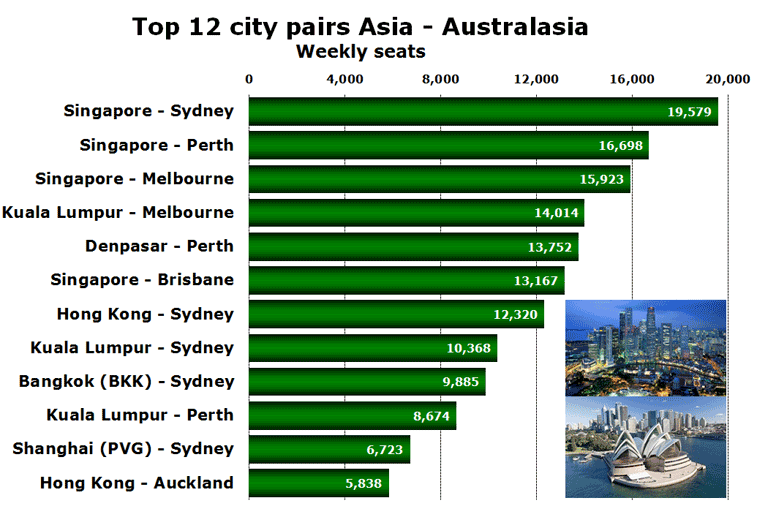 Even though Singapore – Sydney reduced its capacity by 10% when comparing data from 21-27 January 2014 with the same week last year, the city pair still accounts for the majority of weekly seats. However, city pair #2 Singapore – Perth managed to reduce the gap, as weekly seat capacity increased by 13% this January. Overall, only four of the top 12 city pairs experienced capacity loss in 2014, with the flights between Hong Kong and Sydney recording the greatest capacity decrease (-18%), owing to Qantas reducing its services from 11 weekly to daily.

Despite these declines, the capacity between Asia and Australasia is set to grow further in 2014. This is exemplified by the new services that are scheduled to be launched in the first half of the year, namely Jetstar Airways’ routes from Denpasar to Brisbane and Tokyo Narita to Melbourne on 16 and 29 April respectively, along with Jetstar Asia’s new offering from Singapore to Darwin on 30 March.