Kenya Airways commenced services on the 3,400-kilometre route from its Nairobi hub to Abu Dhabi on 1 July last year (celebrated with this FTWA), increasing the connectivity to the hub of its codeshare partner, Etihad Airways. The East African carrier offers thrice-weekly departures on the route, while Etihad also operates daily flights.

In the last 12 months, flights between the Middle East and Africa have grown by 9.8%, with close to 1,500 weekly flights being now operated between the two regions. Total weekly seats have grown at a faster rate, having over the last year increased by 14%, with ASKs up by 15% to 864 million.

The top 12 country pairs currently command 66% of the total market, which is marginally down from the 68% recorded for the same week 12 months ago. The top five country pairs have remained unchanged in the last year, and there have been no new entrants in the top dozen since last January, although there have been movers in that time. Country pair #13, Jordan – Libya, has however reduced the gap to twelfth place, courtesy of schedule increases from Afriqiyah Airways (+1 weekly flight from both Benghazi and Tripoli to Amman), Libyan Airlines (+1 Benghazi to Amman) and Royal Jordanian Airlines (+3 Amman to Tripoli and +1 to both Misurata and Benghazi from Amman). 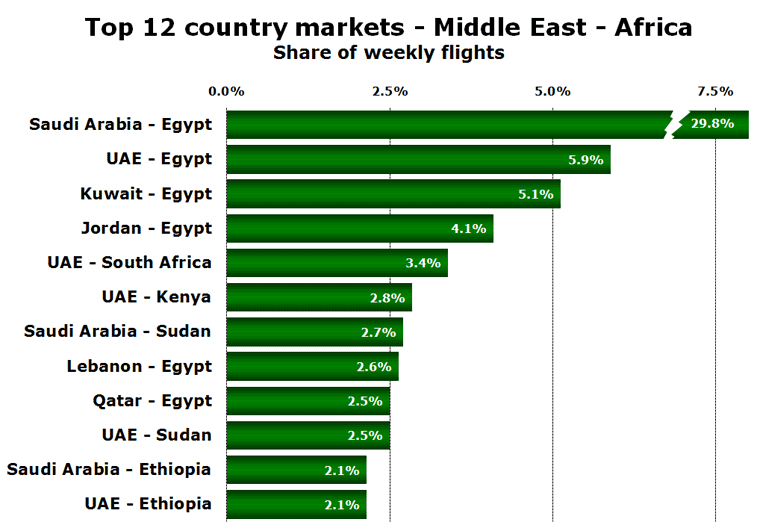 The #1 market, between Saudi Arabia and Egypt, has expanded its share over the last 12 months, up from 27.8% of weekly flights to 29.8%. This impressive 18% growth was only beaten by one other country pair, between UAE and Kenya, which has grown by 24%, due in part to Kenya Airways beginning thrice–weekly flights from Nairobi to Abu Dhabi last July as part of its commercial tie-up with Etihad Airways. As a result of this growth, the country pair leapt from tenth a year ago, to sixth position this January.

Only three of the top 12 country pairs produced negative growth since last January, led by #2, between UAE and Egypt, which declined by 13%, with flights between Jordan and Egypt down by 12%, while capacity between UAE and Sudan was 5.3% lower. UAE – South Africa has the highest amount of ASKs, at 122 million, which partly due to the sector length, represents 14% of the total between the regions.

While Egypt featured in half of the top 12 country pairs, the North African country is present in seven of the top 12 route pairs. The top 12 routes represent 40.9% of total weekly seats in January 2014, up marginally from 40.6% in the same week in January 2013. A new entrant to the top 12 is that of #4 route pair Jeddah to N’Djamena (which according to Innovata / Diio Mi schedules didn’t even operate last year)  which posted growth figures that outstripped even those generated by Doha to Cairo (+36%) and Jeddah to Cairo (+25%). 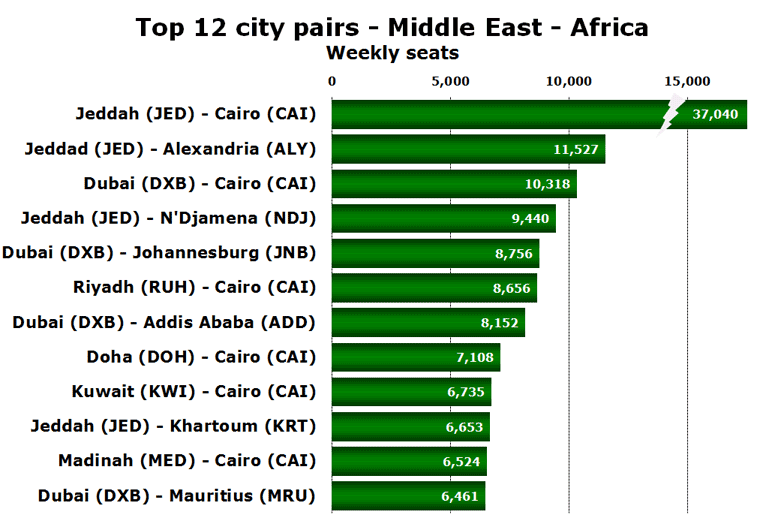 Only two of the top 12 routes registered a decline in weekly seats over the past 12 months – namely Dubai to Cairo (-1.4%) and from Kuwait to Cairo (-0.9%). Despite these declines the underlying capacity trend between the Middle East and Africa that looks set to continue is one of growth. This is exemplified by new Egyptian start-up carrier Air Go Airlines, which has indicated from 1 April that it is planning to add four Saudi Arabian destinations to its initial network from its Cairo base – namely to Yanbu (daily), Tabuk (thrice-weekly), Gassim (thrice-weekly) and Taif (four times weekly), operated by its A320s.