Hawaii’s ASKs up 7% in December 2013; Hawaiian Airlines dominates with 37 routes Covering an area of over 28,000 square kilometres, Hawaii is the most recent of the 50 US states (joined the Union in August 1959) and the only state made up entirely of islands. Located in the region of Polynesia, Hawaii has an estimated population of 1.4 million. The state’s only international airports, which dominate air traffic, are Honolulu, Kahului, Lihue and Kona airports, and handled a combined 30 million passengers in 2012. In addition, they represent 95% of all weekly seats, while the remainder of services are split between the other seven commercial airports.

Analysis of Innovata schedule data indicates that, while the trend was fairly uneven in the second part of the last decade, Hawaii has become increasingly attractive for the network planning community. In fact, December 2013 capacity results in over 14% growth when compared to the same period 10 years earlier, including an impressive increase of 92% for Lihue. In the same timeframe, both Honolulu and Kahului increased by 14%, while Kona experienced 10% growth. 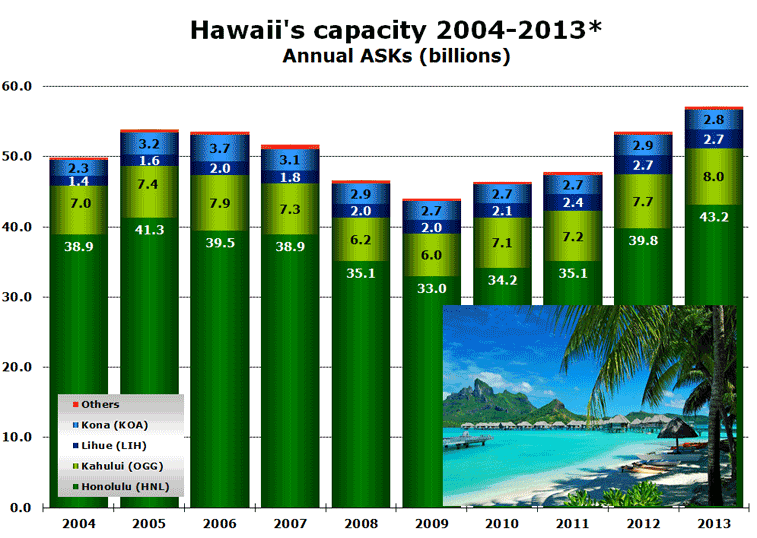 Furthermore, capacity growth has visibly accelerated in the recent years due to the strong interest in the development of international services to Hawaiian airports, achieving a significant increase of over 30% in 2013, when compared to 2009. Looking back 12 months to December 2012, ASKs went up by 7%, with Honolulu recording the largest growth (+9%).

Hawaiian Airlines dominates with over 40% of flights and seats

The top 12 airlines operating in Hawaii represent 94% of total weekly seat capacity. Looking at this year’s table, there is no surprise that Hawaiian Airlines is still the largest carrier, as it controls almost 49% and 41% of weekly seats and flights respectively. According to Flightglobal, Hawaiian Airlines carried almost 10 million scheduled passengers in 2013, which was up 5% at a load factor of 82%. This January, the carrier operates on a total of 37 routes, of which 14 are inter-island services. On these inter-island routes, Hawaiian Airlines has an 82% share of seat capacity and a 50% share of flights. On the other hand, Los Angeles is the carrier’s most frequently served destination outside Hawaii, with thrice-daily flights from the islands’ busiest airport, Honolulu. 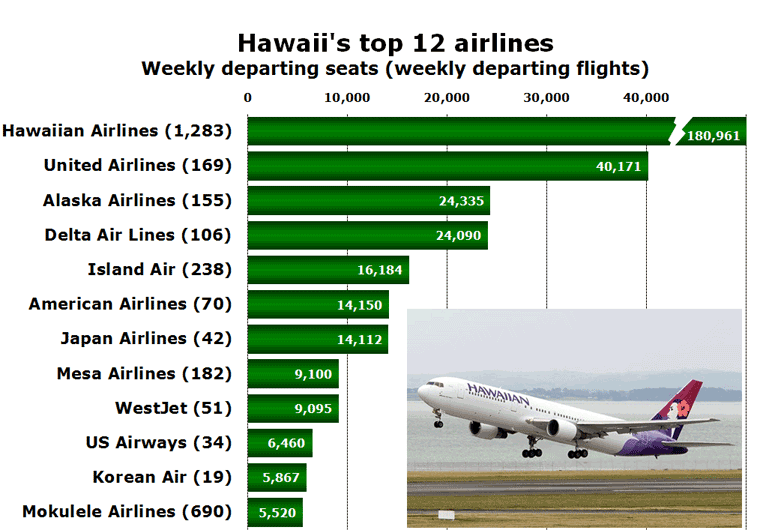 Weekly seat capacity has slightly increased by 2.1%, with eight out of the top 12 airlines recording growth, when comparing data from this January with the same week last year. The stand out performance is that emanating from Island Air, the Honolulu-based carrier, which experienced significant growth of 95%, while Mesa Airlines, which operates on behalf of go! to the Hawaiian Islands, recorded the greatest capacity decrease (-27%).

Out of the top 12 destinations, seven services are operated to the US mainland (and are highlighted in the chart below). At more than 37,000 weekly seats offered by four airlines (1.2% more than in January 2013), Los Angeles is by far the busiest destination from Hawaii, even though it is just over 4,100 kilometres away. The four main Hawaiian airports all provide non-stop services to Los Angeles, adding up to a total of 188 weekly flights. This destination, along with San Francisco and Seattle-Tacoma, account for 51% of all weekly seats from Hawaii to the US mainland. 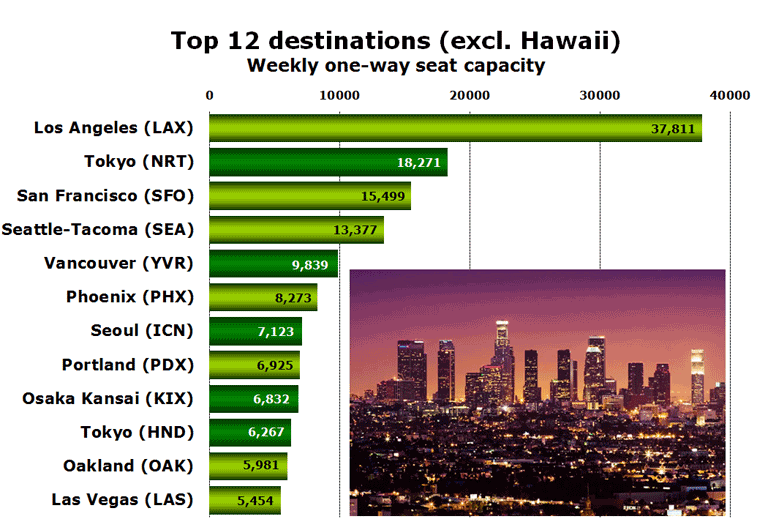 Japan has 53% of international market

Internationally, Japan is the dominant country market from Honolulu, as 53% of all weekly seats are operated to five Japanese airports, such as Fukuoka, Tokyo Haneda, Osaka Kansai, Tokyo Narita and Nagoya, with services provided by China Airlines, Delta Air Lines, Hawaiian Airlines, Japan Airlines, Korean Air, All Nippon Airways and United Airlines. In fact, Tokyo Narita alone is served by 63 weekly services with Japanese carriers offering a market share of 44%. The fastest growing international destination is Osaka Kansai, which has seen double-digit growth of 19% when comparing data from January with the same week last year. Other significant international routes are to Seoul Incheon (24 weekly services split between Hawaiian Airlines, Korean Air and Asiana Airlines), and Vancouver (54 weekly flights served by Air Canada and WestJet). This makes WestJet the only genuine low-cost carrier within the top 12 airlines serving Hawaii.

Six other airports in Hawaii with scheduled services

While Honolulu, Kahului, Lihue and Kona are the primary airports in Hawaii, Innovata schedule data for January reveals a further seven airports with scheduled flights. These are dominated by Hilo Airport, which handled 1.3 million passengers in 2012 and is served by Hawaiian Airlines, Mesa and United. 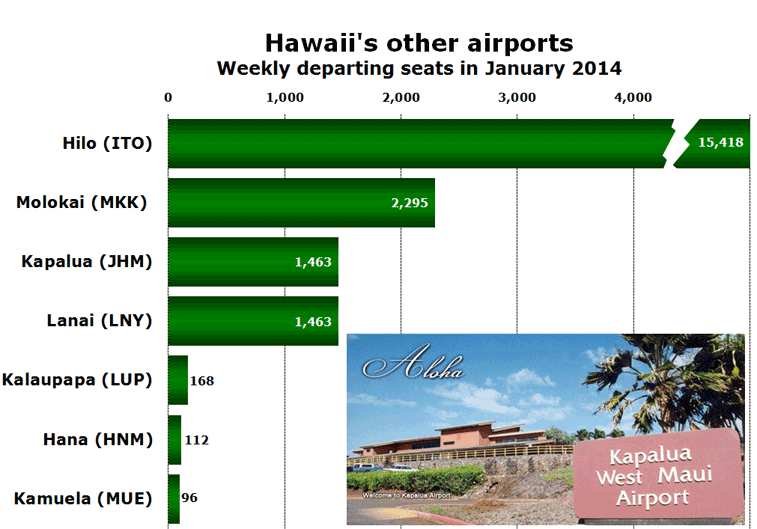 Some of these airports are actually far busier during the summer season (from May to October), when they serve as more convenient gateways than Honolulu to specific beach resorts within the Hawaiian Islands.

11 new routes from Hawaiian airports in 2013

According to anna.aero’s research, Hawaiian airports have seen the launch of 13 new routes from six different carriers in 2013. Allegiant Air (with four services) and Hawaiian Airlines (with three) are the only airlines that have launched more than one service last year. Out of the 11 destinations, Taipei Taoyuan is the most frequently added airport, as a result of China Airlines’ twice-weekly services and Hawaiian Airlines’ thrice-weekly flights. In addition, Air China has recently added its first route to Hawaii on 21 January with the launch of thrice-weekly flights from Beijing to Honolulu.