Asia has seen the biggest growth in new services to the Maldives. Apart from AirAsia X (from Kuala Lumpur), Cathay Pacific Airways (from Hong Kong) and Tigerair Singapore (from Singapore), the island airport has also welcomed new services in the last 12 months from Hong Kong Airlines and Korean Air.

After a controversial interlude (2010-2012) when it was run by Indian-based GMR, Ibraham Nasir International Airport serving Malé in the Maldives, is once again a 100% state-owned airport, operated by the Maldives Airport Company Ltd (MACL). Traffic appears to be booming at the airport with schedule data for January showing a 20% increase compared with this time last year. This year has already seen the launch of new non-stop flights from Singapore with Tigerair Singapore while last year saw the arrival of several new carriers.

Examining the airport’s network of scheduled services reveals that Sri Lanka is the leading country market with SriLankan Airlines operating up to five daily flights using widebody aircraft. Other carriers such as British Airways (thrice-weekly) and Emirates (daily), operate from their home bases to the Maldives and then on to Colombo. The opposite applies to newcomer Korean Air, which serves the Maldives from Seoul Incheon via Colombo. 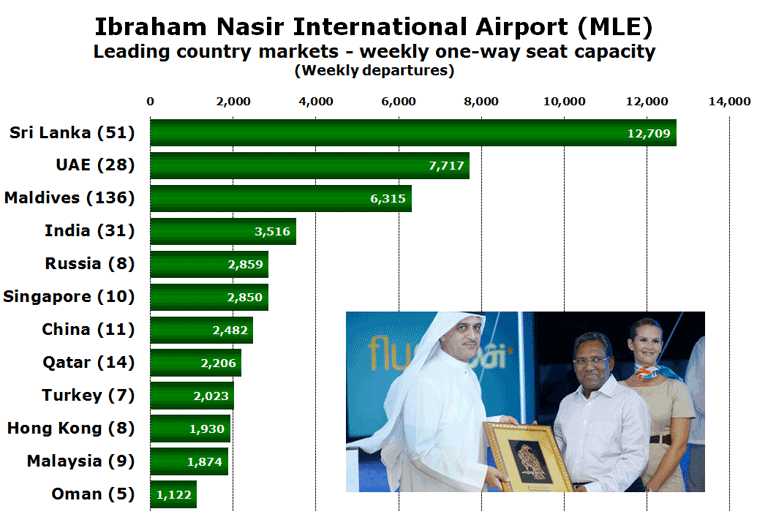 After re-taking ownership of the airport and its operations at the end of 2012, MACL appears to have been extremely proactive (and successful) in attracting new airlines to serve the Maldives since the beginning of 2013. A chronological summary of events is given below.

A total of six new airlines (AirAsia X, Cathay Pacific, flydubai, Hong Kong Airlines, Korean Air and Tigerair Singapore) have been persuaded to start new services since the beginning of 2013, while other carriers have increased frequency and/or capacity. All three MEB3 carriers are present in the Maldives with Emirates offering double-daily flights from Dubai, and Etihad Airways and Qatar Airways both flying daily.

Much of the airport’s growth in 2013 has come from Asia, while the European market has seen little development. The UK market fell by one-third in 2012 from 152,000 to just over 100,000 while in the first six months of 2013 passenger numbers fell by almost 50% (Source: UK CAA). Other carriers from western Europe serving the Maldives include Austrian Airlines (from Vienna), Condor (from Frankfurt), Meridiana (from Milan Malpensa) and Thomson Airways (from London Gatwick).

There are two main local airlines in the Maldives. Maldivian has been the name since 2008 of the local domestic and regional airline, which currently operates a fleet of six Dash 8s as well as a single A320 for use on flights to Bangladesh, China and India. From Malé the airline serves a total of eight domestic routes ranging in sector length from 114 kilometres to 673. The modestly named Mega Maldives Airlines, which celebrated its third birthday in late December, currently offers non-stop flights to Beijing, Hong Kong and Shanghai, using a mix of a single 757 and two 767s.

Mega Maldives Airlines’ CEO is George Weinmann, a former Boeing engineer and native of New Orleans. Last year the airline, which operates two 767s and one 757, changed its ICAO designator to LV, which was previously used by Albanian Airlines before it ceased trading at the end of 2011.