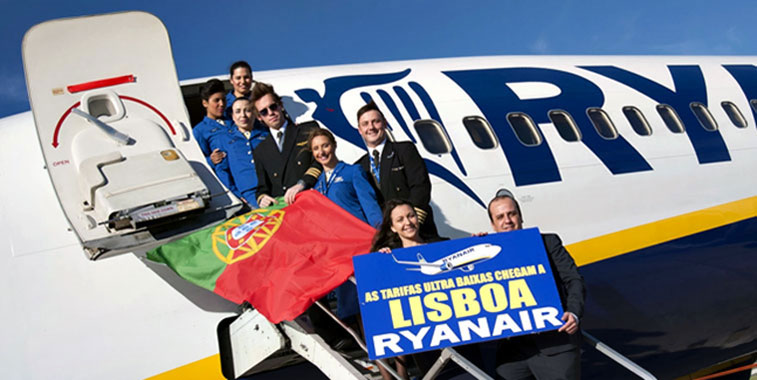 Six ‘new-new’ routes (Brussels Zaventem, Dole, Dublin, Manchester, Marseille and Pisa) will be starting at one of Ryanair’s latest bases — Lisbon; #65 opening in April — this summer. According to the airline’s website, other airports like Palma de Mallorca will be offering 41 new routes in 2014, however only one of them (Brussels Zaventem) is really ‘new-new’, the rest are seasonal re-launches.

We all know that Ryanair are the masters of spin when it comes to metrics like the number of new routes they are starting, the number of jobs they are creating, their value to the economy etc. Here at anna.aero we are particularly interested in the first one and rather handily Ryanair discloses all of its new routes for all the world to see on its website. One of our data elves has spent the last two days ‘wallowing’ in this new route data from the ULCC’s website, to unearth the actual ‘new-new’ routes, a task which frankly, no-one else was ever going to do, no matter how interested they were. 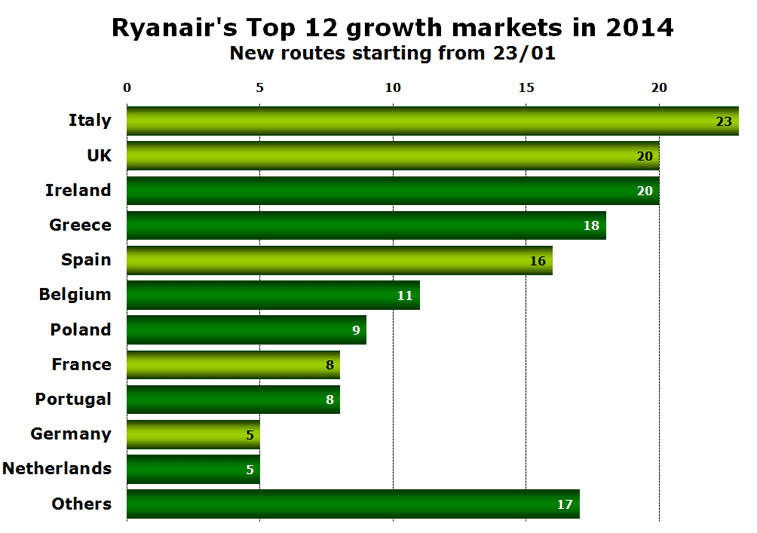 As good as its promise, following the removal of Ireland’s Є3 aviation tax in April Ryanair is growing in its home country, a fact that has no doubt pushed Ireland up the table to third, with its 20 ‘new-new’ routes split between Dublin (nine), Shannon (eight) and Knock (three). Despite the highly seasonal nature of many Greek markets, it has also performed well, with the new base #63 Athens (six ‘new-new’ routes) contributing to its total of 18, along with five other airports Chania (three), Corfu (two), Kos (two), Rhodes (two) and new base #64 Thessaloniki (three).

Brussels and London Stansted are #1

As expected, many of the individual airports that stand to benefit the most from ‘new-new’ routes are Ryanair’s new bases, for example Brussels Zaventem, which opens in late-February and has 10 ‘new-new’ routes. However, the ULCC’s biggest base at London Stansted, is also set to grow by the same amount, presumably following the recent deal to start delivering growth again at the airport.

Palma has 41 new routes but only one is ‘new-new’

Many of the ULCC’s partner airports, which signed up to the Ryanair revolution as a path to sustained passenger growth, must be wondering what has happened to those aspirations. Particularly if you have lots of new routes listed on the airline’s website, but most of them are really seasonal re-launches. One such airport might be Palma de Mallorca, which has 41 new routes in 2014. Unfortunately only one of them, the new service to Brussels Zaventem, is ‘new-new’. What follows is a list of those airports which may well be feeling a little deflated by the lack of ‘new-new’ routes in 2014, despite the fanfare from Ryanair:

Despite Spain being the #5 market in terms of attracting ‘new-new’ routes, five out of the above top 12 are also from Spain, with 131 new routes according to Ryanair actually only delivering six ‘new-new’ services in total. The paradoxical performance of Spain is also true for the FIGUS nations as a whole, which has nine out of 12 airports listed, perhaps showing these market’s maturity in terms of the Ryanair business model.

The rules of Ryanair’s ‘new-new’ routes

Now to understand how we did it. The new route data was taken from the airline’s website on 23 January (and may well have changed since then). According to the data extracted on that day, Ryanair is planning to launch 1,099 new routes so far in 2014. Already this is an inflated figured, as the ULCC claims that a new route between Aarhus and Girona is one new route, but so is the city pair in reverse from Girona to Aarhus. This is fine, as long as there is an even number of new routes, which there wasn’t. Our data elf found two ‘missing’ new routes, both from Brussels Zaventem, to Palma de Mallorca and Venice Treviso (take note Dara Brady, who recently became Head of Web Development at the airline), but presumably there should be at least another one to make the total an even number. Answers on the missing route on a postcard please.

In order to qualify as a ‘new-new’ route, our data elf used Innovata schedules over the last 12 months to see if a route had previously been operated by Ryanair. Not only does this help eradicate the seasonal re-launches, but it has also seen routes which were temporarily operated at Warsaw Modlin (in September and October last year) and are now planned to restart in 2014, removed from the list. Also not classified as a ‘new-new’ route is one that does not operate a regular scheduled service for at least one month — one (two) example(s) being Manchester-Nice (and Nice-Manchester of course) which only operates for two flights on 10 and 11 March, presumably only being operated for the MIPIM property event.