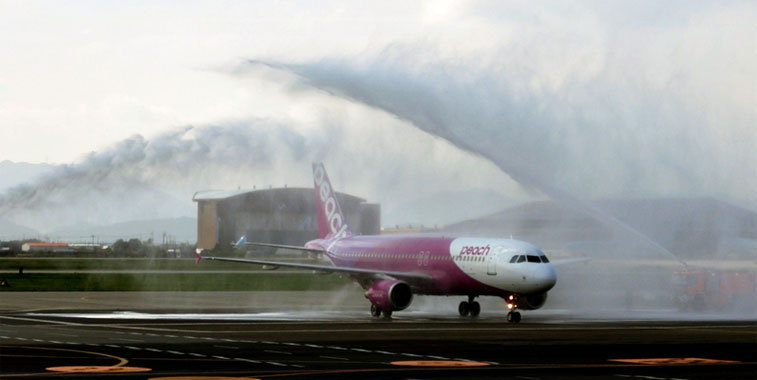 This Peach Aviation FTWA on 13 September last year for its Osaka Kansai to Busan route launch was the previous lowest scoring ‘Arch of Triumph’ winner, with a tally of just 17.4 out of 40, again in a one horse race. It did however spawn the now popular ‘Gangnam Style’ arch which has been adopted the world over.

Asian airports have taken an early lead in the 2014 ‘Arch of Triumph’ competition, although Europe still has the #1 FTWA (see table below). However, this week’s victory, which has secured Asia’s early lead, is a hollow one, as the winning FTWA won in a one horse race, and in the process also delivered the lowest winning score (13.4 out of 40) in the competition’s 17-week history. But a win is a win, no matter how it is achieved, and this should act as a warning to the rest of the world’s airport’s marketing and fire departments – get your tenders out! In the meantime, keep monitoring! 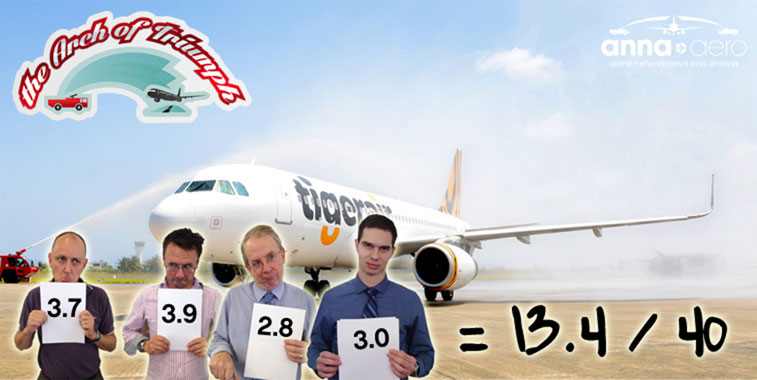 Water arch or aircraft wash? You decide, but it’s still the winner in this week’s one horse race.

Marc: 3.7 I know when you get a new car, you like to keep it clean…lovingly washing it every weekend on your drive. Is it the same for aircraft? Did Tigerair Singapore order a full wash and wax for their new sharklet-equipped A320 from the fire crews in Malé? That could be one explanation for this poor FTWA.

Paul: 3.9 This vague dampness isn’t a FTWA at all, but further concerning evidence of the rising sea levels that threaten the Maldives’ tourism-dependent economy which rises only two metres above sea level. The situation is a complete paradox: 30% of the islands’ GDP comes from tourism, like the arrival of this new Tigerair Singapore service. Yet, if you accept theories of man-made climate change, this same global tourism industry is an integral source of the problem. Sort that one out and you’re golden. It’s a rubbish FTWA by the way.

Ralph: 2.8 Did the photographer turn up late for this one? Judging by the position of the fire trucks this looks like it was taken about 10 seconds after the aircraft passed below what might be considered the arch. Still, weather looks nice in the Maldives …

Vlad: 3.0 A very poor FTWA, with one fire truck lacking pressure in its cannon. Not to mention that the photographer was probably getting a tan and forgot that Tigerair Singapore’s flight had landed in the sunny Maldives.