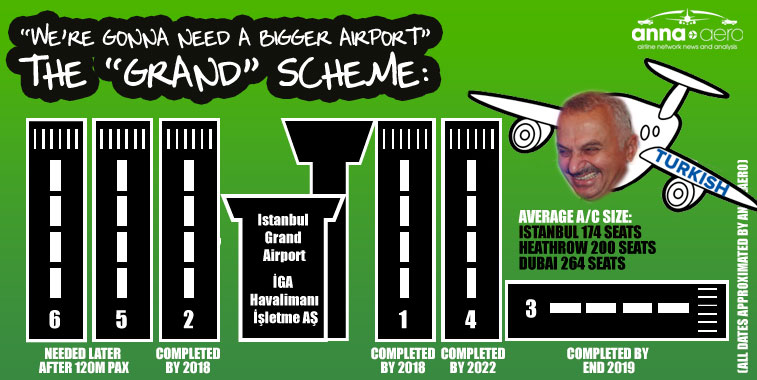 Aircraft size has increased at Europe’s biggest airports in the last 10 years. But while Heathrow has the biggest aircraft – 200 seats compared to a top-10 average of 169 – this is still less than 3% growth in a decade. So new runway capacity continues to be the ultimate means to grow – although the benefits of the fourth runway at Frankfurt have been offset by night flight restrictions and Munich has had its third runway rejected. Observing this Istanbul has a “grand plan” for European hub domination…

Despite 2013 not being a great year economically for many of Europe’s member states, passenger numbers at the region’s top 10 airports still increased by 1.4% from 475.1 million to 481.6 million. With signs that several economies may be getting better rather than worse, demand for air travel should start growing at a slightly faster rate in 2014. Among Europe’s top airports London’s Heathrow and Gatwick airports have both revealed plans for how they would like to expand their runway capacity, Munich has apparently had its plans for a third runway rejected by the local community, while Istanbul has revealed plans for a major new airport to deal with increased demand. Only Frankfurt has been able to open a new runway in recent years, but that gain has been offset by increased controls on night flying.

One way to increase passenger throughput at airports, without building more runways, is to increase the number of passengers per flight, which in turn would suggest increasing the average size of aircraft operating at the airport. Using Innovata / Diio Mi schedule data for the last 10 years, anna.aero has calculated the average aircraft size at each of Europe’s top 10 airports. 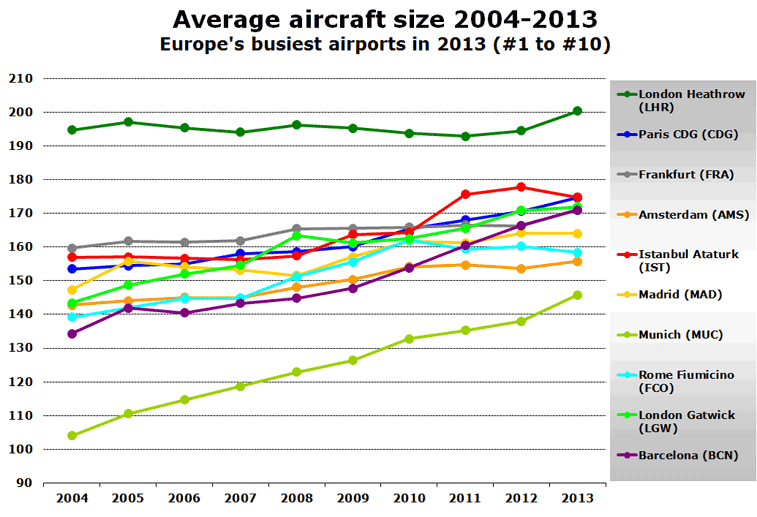 The trend is clear to see. The average size of aircraft (as measured by its seat capacity) is growing. At all 10 airports, the average aircraft size was larger in 2013 than it was in 2004, though the increase ranges from a modest 2.9% at London Heathrow (which broke through the 200-seat mark for the first time in 2013), to 40.2% at Munich, which saw average aircraft size grow from 104 seats in 2004 to 146 seats in 2013. With just two runways, London Heathrow is both Europe’s busiest airport (over 72 million passengers in 2013), but also has on average the biggest aircraft operating there, among the top 10 airports. 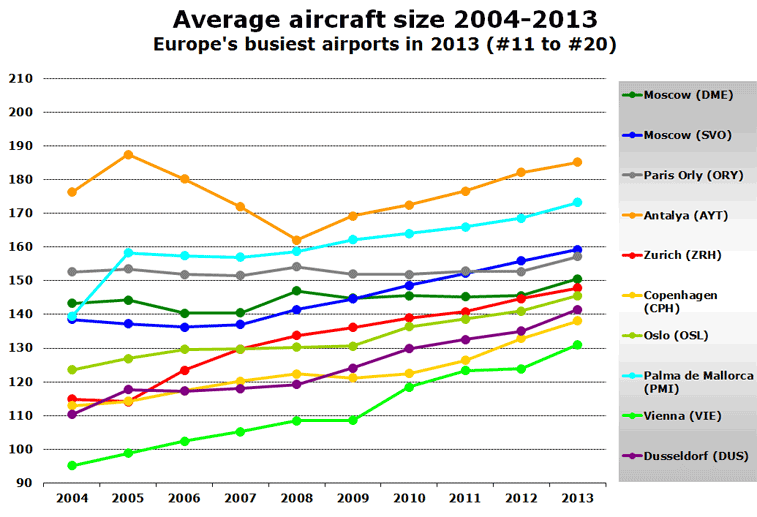 Heathrow only beaten by Paphos and Dalaman

According to our analysis of schedule data, there were 670 airports across Europe with scheduled services in 2013. Heathrow’s average aircraft size of 200.3 seats was beaten by only two airports in Europe; Paphos came top with 202.6, followed by Dalaman with 201.7. Tenerife Sur was fourth with 191.1 followed by Reus with 190.4. After that there are several airports where the only scheduled services are operated by Ryanair with their 189-seat 737-800s. At the other end of the rankings are several Scottish island airports where the average aircraft size is less than 10 seats.

Dubai tops global ranking ahead of Taipei and Hong Kong

Analysing the data for 2013 for all the world’s airports (almost 3,800 of them) reveals that Heathrow only ranks 27th in the world (minimum requirement of 1,000 departures per annum). Thanks to its growing fleet of A380s and all widebody fleet it will come as no surprise that Dubai leads with an average aircraft size of just over 264 seats per departure. They are followed by Taipei Taoyuan (253.5) and Hong Kong (248.7). The top 30 is dominated by airports in Asia, though there are some notable exceptions such as Enfidha in Tunisia (211.2), Colombo in Sri Lanka (209.1) and Doha in Qatar (208.8).