Copa Airlines is the leading airline operating non-stop flights between North America and Central America. In the last 12 months, it has launched two new destinations in the US; in June, Boston services began, followed in December by Tampa becoming its ninth US destination. This February, capacity is up over 7% across all non-stop routes between North and Central America.

Scheduled airline seat capacity between airports in North America and Central America is up 7.3% this February when compared with a year ago. The US-Costa Rica market remains the largest, but is being caught by the US-Panama market. The Panama market has had a good 12 months. Apart from US capacity to the country being up 11.3%, scheduled seat capacity from Mexico is up 13.9%, the Canada-Panama market has also seen growth, of 16.3%. 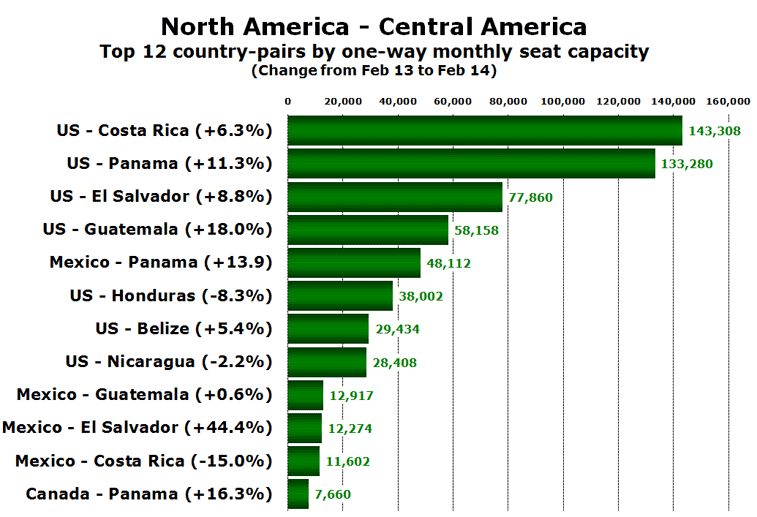 The only country pair to gain a non-stop service that previously did not have one is Mexico-Belize, which since last March has been served by a non-stop flight between Cancun and Belize City operated daily by Tropic Air, the self-styled ‘Airline of Belize’, with its Cessna Caravans.

Copa Airlines extends lead over its nearest US rivals

Analysis of which airlines offer the most seat capacity on non-stop flights between North and Central America reveals that Panama’s Copa Airlines leads the way from American Airlines and United Airlines. With growth of 14.7%, Copa Airlines has extended its lead over its US rivals. American Airlines is reporting only modest 2.6% capacity growth in the market, while United Airways has actually reduced capacity slightly, by 0.6%. 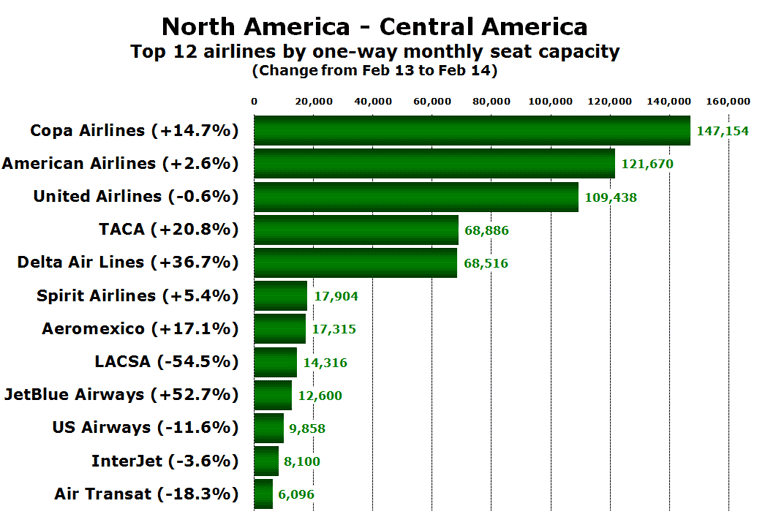 Ninth ranked JetBlue Airways is the fastest-growing airline in this market (+53%) having added a new daily Fort Lauderdale to San Jose (Costa Rica) in June, to complement its existing Orlando-San Jose, and New York JFK-Liberia services.