The best ever score in ‘Arch of Triumph’ history 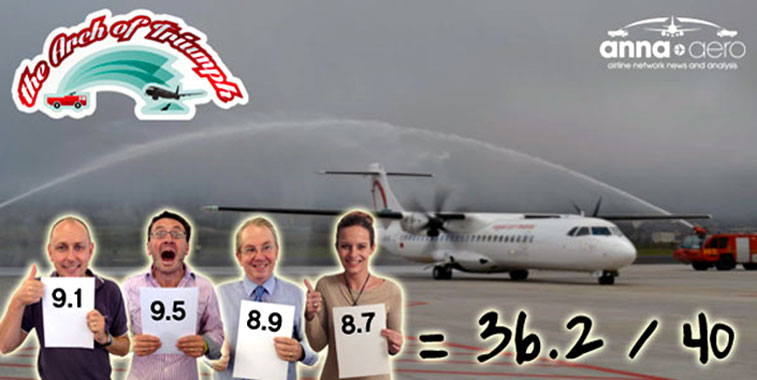 Previous best – last year’s winner was this excellent effort from Tenerife Norte. However this week’s winner has smashed the record score achieved by the Aena airport, with an impressive tally of 37.4.

It had to happen sometime. The winning score of 2013 ‘Arch of Triumph’ has been beaten. The 2014 title could well have been settled in just the fourth week of this year’s competition, with a score that will be very hard to beat over the next 11 months. The victory, coming from Dubai Al Maktoum, represents the second win for the ‘other’ Dubai airport, having won last October, but it also puts the Middle East into the regional competition which is currently being led by Asia. The route launch FTWA was also the first in the competition’s history that anna.aero has received for a new cargo service. 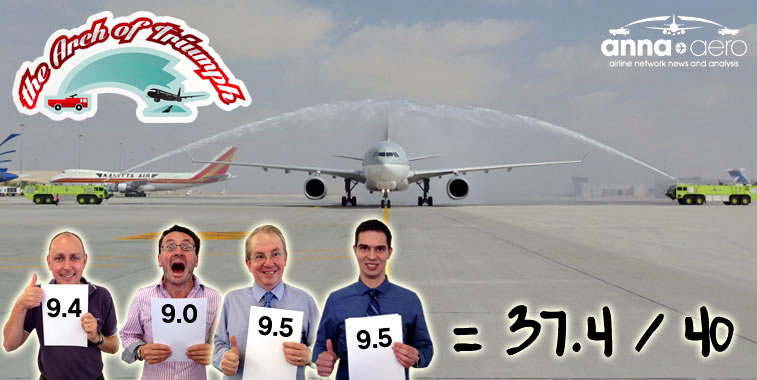 You can see why they have won the ‘Arch of Triumph’ before with this effort.

Marc: 9.4 This is the fourth offering from the fire crews at Dubai Al Maktoum and for me this is their best yet, even having won last October with a score of 29.0 and in the process beating off competition from nine other airports. Being ultra-picky the picture could have been taken a bit closer and earlier…but really I’m splitting hairs…excellent FTWA.

Paul: 9.0 It is a matter of record that anna.aero’s ‘Arch of Triumph’ was the first-ever industry award received by this airport after the Wizz Air inaugural passenger service last October. And this ‘leaping-dolphin-tastic’ FTWA could even be the contender for the 2014 annual prize (although in February it is a little early to talk of that). I happen to like the spacious photo — it clearly shows just how much room there is, something that will be used to great effect this summer when many carriers have to switch from DXB because of the runway closures.

Ralph: 9.5 Symmetry of fire trucks? Check. Curved arch? Check. Aircraft right on centre line? Check. If the angle of the sun had conjured up a rainbow I think I might have given it 10. Still, great effort.

Vlad: 9.5 This ‘Leaping Dolphin’ is so close to perfection! If the photographer was two seconds early this FTWA would score the first ‘perfect 10’ in the history of ‘Arch of Triumph’ as Nadia Comaneci did at the Montreal 1976 Olympics (gymnastics). 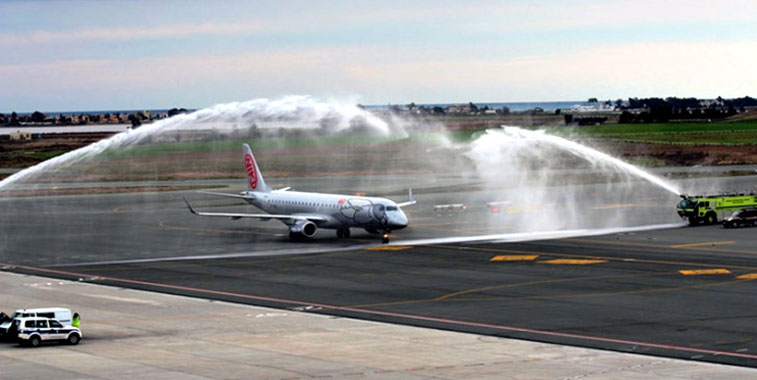 Half of this FTWA is more or less perfect, half isn’t.

Marc: 6.3 The left-hand side of this FTWA is perfect apart from not being able to see the tender. The right-hand side crew must have been in a circadian low (Google it) when the NIKI aircraft showed up from Vienna, as they seem a bit slow to react!! Could have been a cracker…

Paul: 5.5 Cyprus was the birthplace of Aphrodite, the ancient Greek goddess of love beauty, pleasure – and procreation. (What’s not to like?!) Aphrodite had many lovers, but I’m not sure she’d be over-fond of this FTWA in the ‘things-of-beauty’ department. Never mind — Cyprus is a lovely hot place to go on holiday. My personal recommendation is Melanda Restaurant at Tsiolos. It doesn’t have a website. Great grilled fish and a safe unspoilt beach for the kids. Not far from the Aphrodite Hills.

Ralph: 5.2 Do flies like water? NIKI’s colour scheme and cartoon fly make them among Europe’s most distinctive aircraft, but it seems to have distracted at least one of Larnaca’s fire truck operators.

Vlad: 6.0 NIKI’s first flight from Vienna was welcomed by the Cypriot fire fighters with a classic ‘Big boy, Little boy’ FTWA. The truck alignment and the timing of the photograph was great, but the coordination of the two monitors, particularly the right one, leaves a lot to be desired. 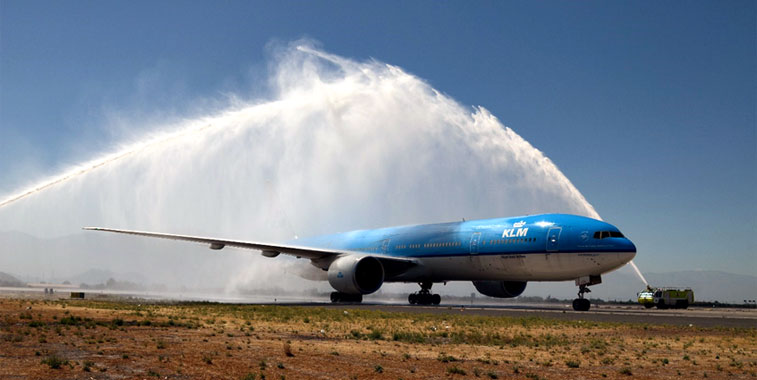 Marc: 7.2 A sound effort from the fire crews in Santiago in Chile, and only our second FTWA offering from South America. For me, this one beats the only other effort from Sao Paulo Guarulhos we received earlier this year.

Paul: 6.5 Big welcome from the Chileans! But it is hard to hold it together when you fire your monitors this high — in contrast if you look at the near-perfect ‘leaping dolphin’ arch performed in Dubai you’ll see the apex is just above the tail plane, whereas Santiago’s FTWA could have easily interfered with any passing Wandering Albatross, even at its regular cruise altitude.

Ralph: 6.8 Beautiful clear blue sky, but the arch is a bit messy and the wall of water means you can’t even see the tailfin.

Vlad: 7.0 Lovely background of the Andes with a decent FTWA welcoming KLM’s first flight from Amsterdam. It’s a shame that just one monitor is displayed as this could have scored more than this. 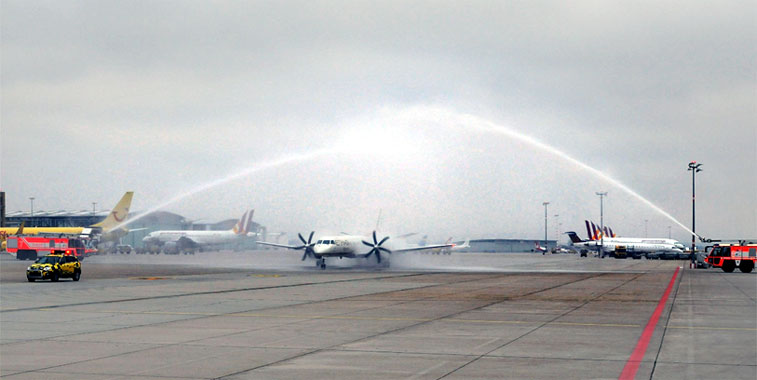 Marc: 6.8 Home of precision engineering when it comes to cars but seemingly not when it comes to FTWAs. Unless of course this move to replicate famous Korean dance moves with this Gangnam Style arch means that Daimler and Porsche are going to start taking car building tips from Hyundai and Kia.

Paul: 9.0 I’ve got to be careful what I say about STR. I travel there not infrequently and I don’t want my bags ‘accidentally’ routed to Pyongyang again (where they have actually sold a lot of Mercedes, a firm favourite of the Kim dynasty). The airport restaurant has a Michelin Star, but I once made the mistake of calling its Spätzle — or Swabian noodle — ‘indifferent’. That was in 1993; last week the airport’s spokesperson, Volkmar Kraemer, told me that I’m due to be forgiven in 2017. A nine!!! This arch is definitely a nine!!!

Ralph: 7.5 Not quite there but a good effort. I like the way at least three germanwings Airbus also appear under the arch. Also, with such a grey sky, a hint of colour in the water would have made it visually more appealing.

Vlad: 7.3 It’s been a while since we had a ‘Gangnam Style’, which made me think that this style is not popular any more with the world’s airport fire fighters. However, the South Korean dance-inspired arch is back in business with this offering for the recently launched Etihad Regional service.