Chile has become increasingly attractive for the network planning community. KLM has just re-entered the Chilean market on 2 February with the resumption of thrice-weekly services from Amsterdam to Santiago operated via Buenos Aires Ezeiza.

Located in South America, Chile borders Peru to the north, Bolivia to the northeast, Argentina to the east, Pacific Ocean to the west and the Drake Passage in the far south. The country has an estimated population of 17 million and measures approximately 4,500 kilometres in length, but on average less than 200 kilometres in width. The country’s main airports, which dominate air traffic, are Santiago, Antofagasta, Iquique, Puerto Montt, Calama and Concepcion airports, which between them handled a combined 21 million passengers in 2012. In addition, they represent over 83% of all weekly seats and flights, while the remainder of services are split between the other 10 airports. Santiago, also known as Comodoro Arturo Merino Benítez International Airport, is the main international gateway to the country, as it accounts for 52% of all flights and 55% of all seat capacity.

Analysis of Innovata annual capacity data indicates that around 16.5 million one-way seats were offered on routes involving the Chilean airports in 2013, 10% more than in the previous year. At 15%, domestic capacity achieved significantly more growth than international services, which experienced an annual change of 2.6% last year. 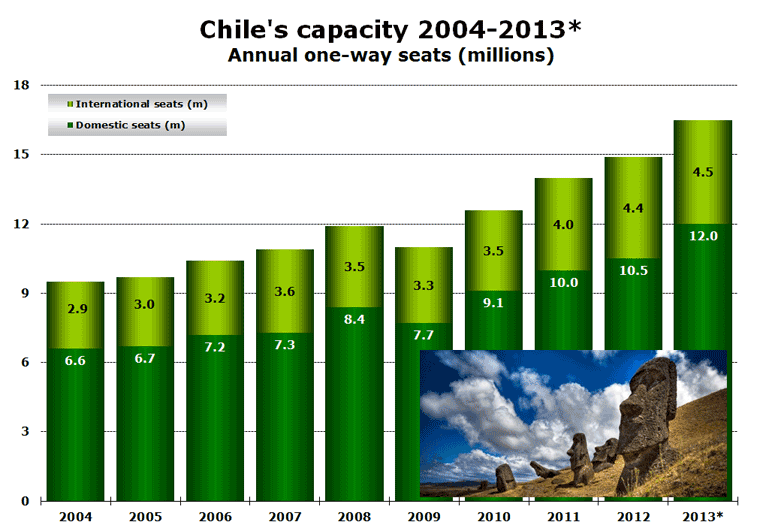 Overall, looking at capacity data since 2004, the domestic market has outperformed the international sector in terms of growth, even if the latter noted 54% growth over this period. In terms of the domestic market, this has increased by nearly 82% when compared to 2004. In fact, one-way seat capacity was up in all years since 2004, with the exception of 2009, when a decrease of 8% was experienced due to the global economic recession affecting the Chilean air transport as well.

LAN Airlines commands over 65% of flights and seats

Looking at this year’s graph, there is no surprise that the flag carrier, LAN Airlines, is still the largest carrier, as it controls almost 65% and 68% of weekly seats and flights respectively. This February, the airline operates on a total of 67 routes from Chile, of which 43 are domestic services. LAN has a 68% share of seat capacity and a 70% share of flights on the domestic sector, on which it directly competes with Sky Airline, Chile’s second biggest carrier. On the other hand, Buenos Aires is the airline’s most frequently served international destination from Santiago, with a combined 10,748 weekly seats to Buenos Aires Ezeiza and Buenos Aires Aeroparque airports. 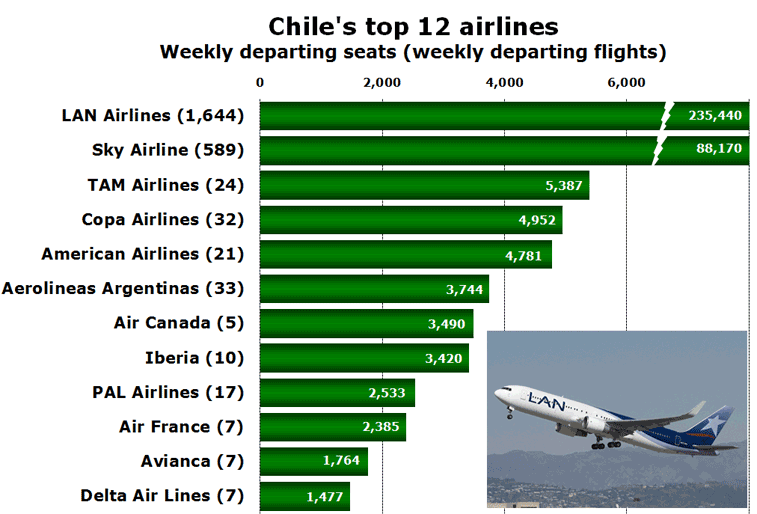 As of February 2014, the top 12 airlines serving Chilean airports command 98% of total traffic into and out of the country, a slight decline from 99% last year. Both Aerolineas Argentinas and Air France have strengthened their presence in Chile with annual growth in weekly seats of 22% and 20% respectively, while PAL Airlines has recorded the greatest capacity decrease (-59%), due to dropping 10 of its domestic routes, when compared to February 2013.

Unsurprisingly, Chile’s largest market is the domestic sector with a market share of 70%, a modest decline from 73% last year. Neighbouring Argentina is still the leading international country market, being served by LAN, Aerolineas Argentinas, Sky, Air Canada and KLM, with the latter having recently resumed thrice-weekly services from Amsterdam to Santiago operated via Buenos Aires Ezeiza. Weekly seat capacity to Argentina is up 9% over 2013 figures, as the five carriers are operating a combined 172 weekly flights from Santiago, Iquique and Punta Arenas. 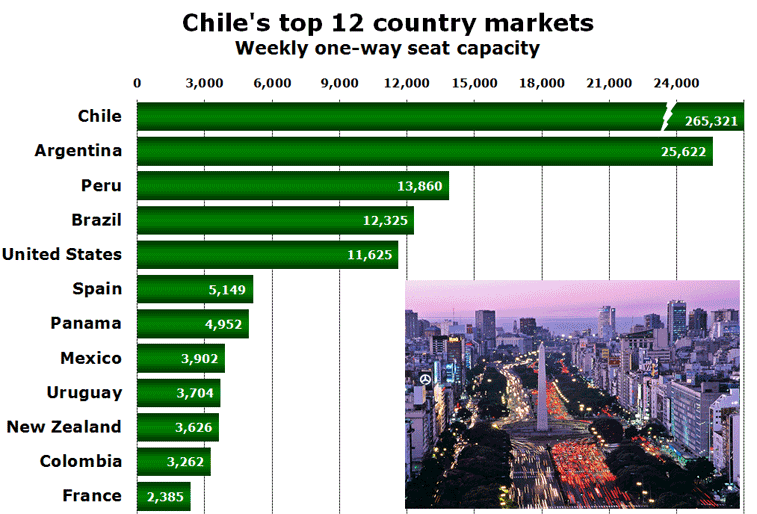 New Zealand is not only a new entrant into this year’s ranking but also the fastest growing country market, growing by over 130% when comparing data from 4-10 February 2014 with the same week last year. LAN has expanded significantly in the last 12 months, increasing its flights from Santiago to Auckland from six times weekly to twice-daily. On the other hand, services to Brazil have noted the greatest capacity decrease (-23%), as a result of TAM Airlines withdrawing its twice-daily flights from Santiago to Rio de Janeiro Galeao.