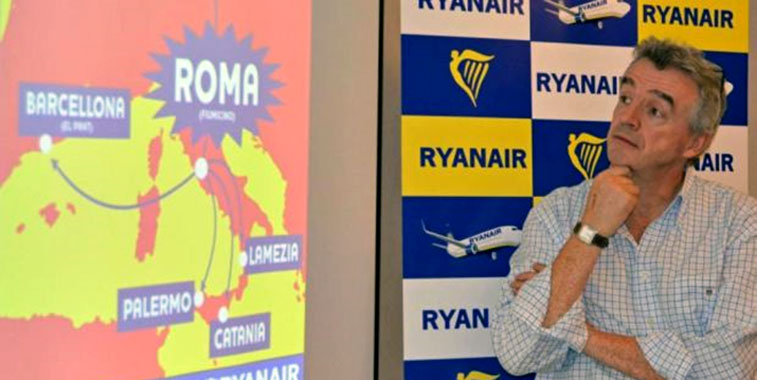 ‘Hmmmm…now I’m flying domestically into Rome Fiumicino I wonder if Alitalia wants me to feed their long-haul network’. Ryanair is now #2 domestic capacity provider at the Italian capital city airport.

This week’s launch of a new daily Ryanair service between Alghero and Bologna is yet another Italian domestic route being launched by the ULCC, as the carrier steps-up its ‘friendly’ onslaught on Alitalia, one which recently saw Michael O’Leary offer to feed Alitalia’s long-haul network of services at Rome Fiumicino. As a result of this significant move by Ryanair, we felt that the changes in the Italian domestic market over the last 12 months were well worth a look.

Using data from the 38 airports which report into Assaeroporti, the Italian airport operators association, domestic traffic for 2013 in Italy has declined by 6.2% to 56.4 million passengers. By contrast, international traffic has grown by 1.3% over the same period to 86.9 million, which results in total annual traffic (which also includes transfer traffic) for these airports of just over 144 million passengers (-1.9%) in 2013. Domestic traffic has therefore fallen from 41% of total traffic in 2012 to 39% in 2013. 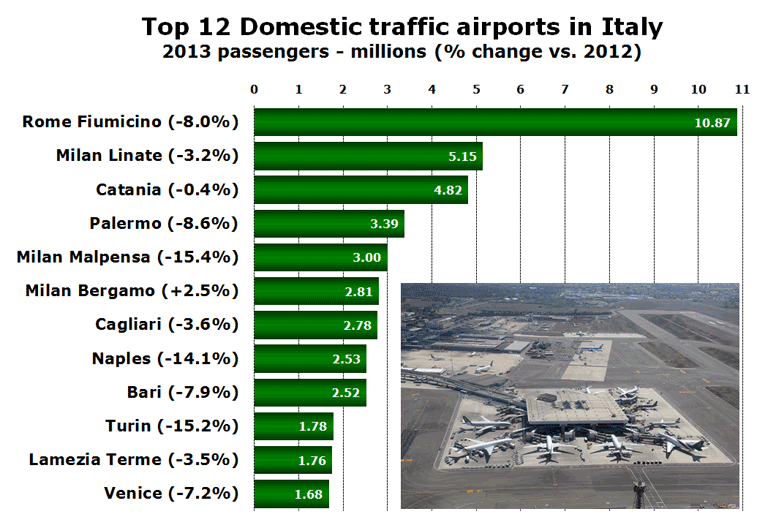 Only one of the top 12 airports, when measured by domestic passenger traffic, has recorded growth over the last 12 months – namely Milan Bergamo (+2.5%). In fact, only seven of the 38 airports registered growth, led by Cuneo which increased its domestic traffic by 70% (up to 125,000 annual passengers), Perugia with +21% (up to 64,000) and Trapani with +15% (up to 1.28 million). No doubt with Ryanair’s arrival in a big way on the Italian domestic scene, many more Italian airports will probably be posting domestic traffic growth in 2014.

For the time being, Alitalia (including CAI First and CAI Second, but not Air One) rules the roost when it comes to domestic seats on offer at the top 12 domestic passenger traffic airports, being #1 provider at two-thirds of the airports. In the last 12 months, the beleaguered flag carrier has lost its #1 spot at Lamezia Terme to Ryanair, but has gained pole position at Cagliari from the ULCC. While it has added no routes from Cagliari, its Milan Linate services have risen from daily to 35 times weekly, while its Rome Fiumicino route has increased from daily to 49 times weekly since last February.

Ryanair’s impact on the Italian domestic market is already being felt, although it is yet to improve this year on its three number one spots it had in 2013. However at Rome Fiumicino and Catania it has come from out of nowhere to secure second place at both airports, while it has improved its standing at Turin, by leapfrogging Meridiana into second.

Bizarrely, easyJet’s relative position has worsened over the past 12 months, despite breaking into the top three at Milan Linate, when it was finally given access to the airport in March last year. At Naples it has been pushed into third spot by Meridiana, while Air One has done the same at Venice. Meridiana has fared no better, losing four of the #2 positions it held last February — namely at Rome Fiumicino, Catania, Cagliari and Turin.

If this analysis had been done on 2011 data, WindJet would probably have featured prominently at some of these airports, in particular at Catania and Palermo. However, the Sicilian-based LCC ceased operations in August 2012.