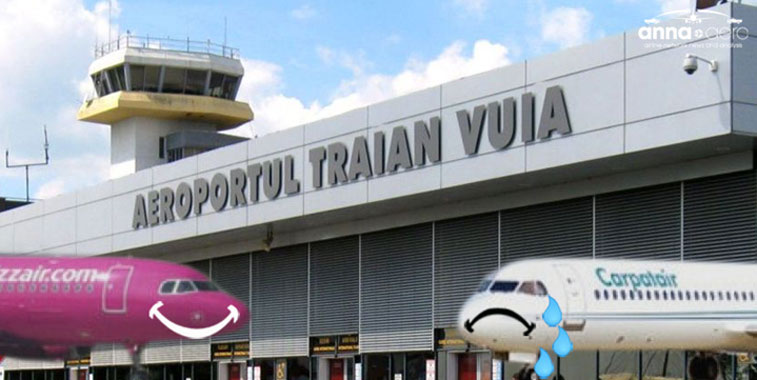 Carpatair, which has been the main operator at Timisoara Airport, has recently filed for insolvency and suspended all its operations. Therefore, Wizz Air becomes the new market leader commanding nearly half of all weekly seats and operating on 10 routes.

Located in the historical region of Banat, Timisoara “Traian Vuia” Airport is the main international gateway to the western part of Romania, serving the city of Timisoara, which was the first European city to have electric street lights in 1884. The airport is currently ranked as the country’s third busiest airport, behind Bucharest and Cluj Airports, and serves as an operating base for Wizz Air and a hub for Carpatair, with the latter having suspended all of its operations on 17 January until at least the end of March. 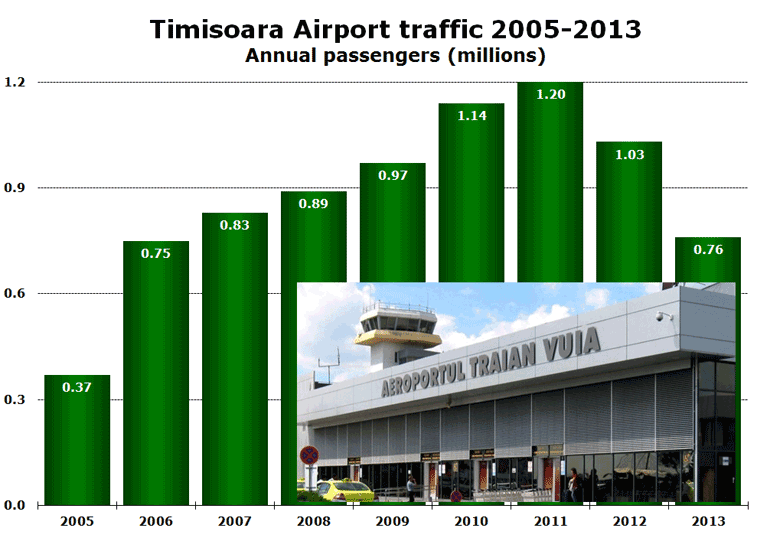 Examination of data facilitated by the Romanian airport indicates that passenger traffic at Timisoara has virtually doubled between 2005 and 2013. A total of over 370,000 passengers used the airport in 2005, a number that increased to 757,000 last year. Notably, even in the worst years of the recession, traffic at Timisoara continued to grow rapidly, recording in 2009 a yearly increase of 9.3% when compared to the previous year. In fact, traffic has visibly accelerated until 2011, achieving a massive increase of over 220% in 2011, when compared to 2005. Since 2011, Timisoara’s traffic has started to decrease, given the operational rationalisation of Carpatair’s network, which has been the main operator at the airport over recent years. According to the 2013 traffic data, the airport experienced 27% decrease in traffic when compared to 2012.

Carpatair, the Romanian regional airline, has operated a network linking niche eastern European destinations with cities from Italy, Germany and the UK. The carrier has used Timisoara as a hub since 2007, mainly to transfer passengers to its western destinations. Analysis of Innovata schedule data for the week commencing 7 January, just before the airline suspended its operations at the airport, indicates that Carpatair’s network from Timisoara was considerably reduced when compared to the corresponding week last year, as 11 routes were dropped. With just four destinations being served from the airport, the carrier’s weekly seat capacity was reduced by 73% over 2013 figures. The airline has recently filed for insolvency on 23 January, but plans to resume Timisoara’s operations from the end of March, according to its official website.

Following the operational rationalisation of Carpatair, seat capacity at Timisoara has decreased by 26%, with three out of the top 12 destinations recording declines over 2013 figures. Even though weekly capacity (from 4-10 February) to Bucharest experienced a double-digit decline of 16% (when compared to data from the same week last year), the 399-kilometre sector managed to maintain its top position in 2014. This is closely followed by services to Munich, which managed to reduce the gap as weekly seat capacity was increased by 13% this January. Overall, the top two destinations currently command approximately 52% of the total market, which is considerably up from the 40% recorded for the same week 12 months ago. 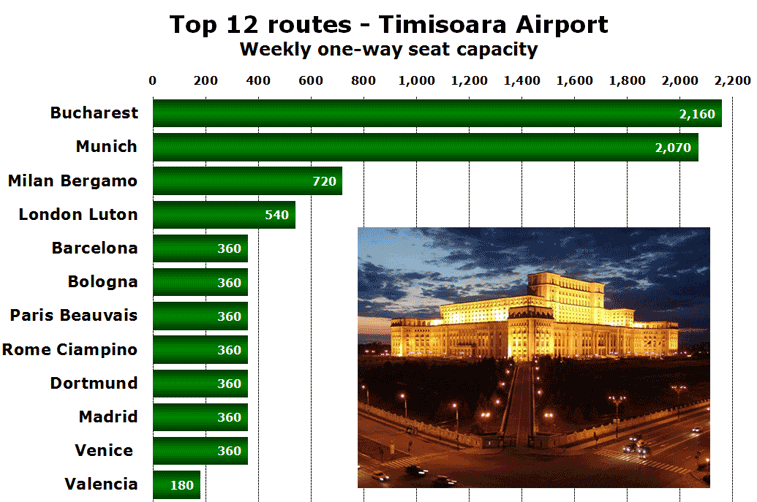 In fact, four out of the 12 top destinations experienced growth, when comparing data from February with the same week last year. The stand out performances are those emanating from services to Barcelona and Madrid, with both destinations experiencing annual growth of 100%, as a result of Wizz Air doubling its operations to twice-weekly flights. In the past 12 months, one new entrant has made it onto this year’s table, namely Wizz Air’s twice-weekly services to Bologna launched on 3 April.

Entering Timisoara’s monthly passenger data for 2013 into anna.aero’s Seasonal Variation in Demand (SVID) calculator, the airport performs exceptionally well, generating a score of 1.6, an “excellent rating”. To give Timisoara a fair evaluation we also ran calculations on Bucharest (3.7) and Cluj (5.5). Against its airport peers from Romania, Timisoara performs better than the significantly larger Bucharest (7.7 million annual passengers) and Cluj (one million).

Wizz Air dominates with 49% of seats

Analysis of Innovata schedule data for February 2014 reveals that Wizz Air is currently by far the dominant carrier at Timisoara, operating on 10 routes and commanding nearly half of the weekly seat capacity. Since it opened its 10th base at Timisoara in March 2009, Wizz Air has hugely expanded, increasing its weekly seat capacity by over 3600% in five years. In terms of weekly flights, the national carrier of Romania TAROM is the market leader with 26 weekly services to Bucharest.