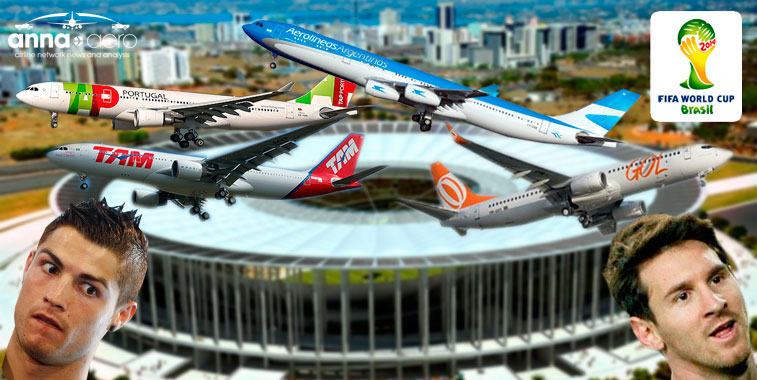 Brasilia Arena, perhaps better known as National Stadium Mane Garrincha, will host seven games for the 2014 FIFA World Cup, including the match for third place. The airport, which is the main gateway to Brazil’s capital, will see a major traffic boost during the summer, as more than 600,000 visitors are expected to arrive in the country during the competition.

Hosting the 2014 FIFA World Cup, Brazil is one of the fastest-growing economies in the world with an annual GDP growth of over 5%. Benefitting from this favourable economic climate, the country’s fourth largest facility according to 2013 passengers data, Brasilia Airport, has grown its traffic impressively over recent years. The airport, also known as Brasilia Presidente Juscelino Kubitschek International Airport, is located 11 kilometres from central Brasilia, serving the country’s federal capital, which has an estimated population of 2.8 million. Behind, Sao Paulo Congonhas, Rio de Janeiro Galeao and Sao Paulo Guarulhos, Brasilia has become increasingly attractive for network planning community, with Aerolineas Argentinas arriving at the airport in the course of last year. 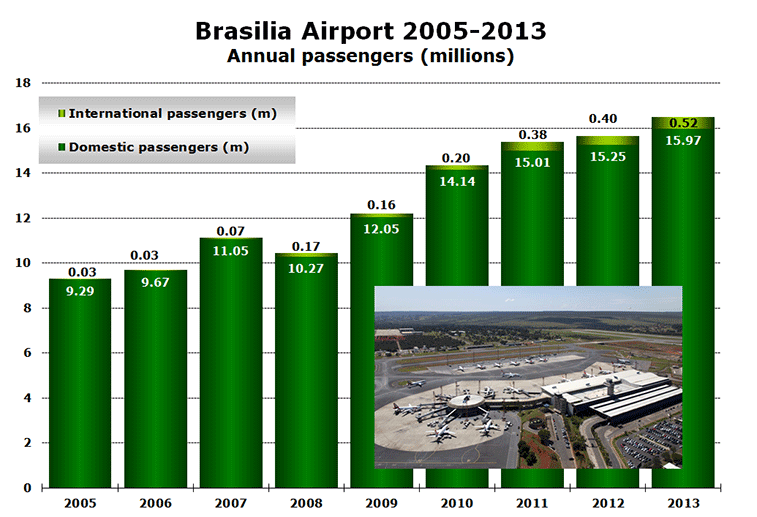 Examination of data facilitated by the Brazilian airport indicates that passenger traffic at Brasilia has increased by 77% between 2005 and 2013. A total of 9.3 million passengers used the airport nine years ago, a number that increased to over 16 million last year, which is a new record high. In fact, the airport has experienced a trend of growth since 2005, with the exception of 2008, when a modest decrease of 6.1% was noted. The international traffic has by far outperformed the domestic sector in terms of growth, increasing by 1600% over this period with half a million international passengers travelling through Brasilia in 2013.

Entering Brasilia’s monthly passenger data for 2013 into anna.aero’s Seasonal Variation in Demand (SVID) calculator, the airport performs exceptionally producing a score of 1.11, an “excellent rating”. Against its airport peer from the same traffic category, Congonhas, its 2013 score is marginally better than the third largest Brazilian airport (1.54 ─ excellent). However, when compared to Galeao ─ the second largest airport ─ it performs worse than the 17 million annual passengers facility, which scores 0.64, an excellent result as well, due to traffic being more evenly spread throughout the year.

While a total of 10 carries operate from Brasilia, as much as 82% of weekly seats are commanded by only two airlines this February. TAM Airlines is Brasilia’s first operator, as it controls almost 43% and 39% of weekly seats and flights respectively. The Brazilian arm of LATAM Airlines operates on a total of 30 routes from the airport, of which just one is an international service, namely to Miami. GOL ─ the Brazilian low-cost carrier ─ is the second player at Brasilia according to weekly seat capacity, not far behind TAM, serving 27 domestic destinations. 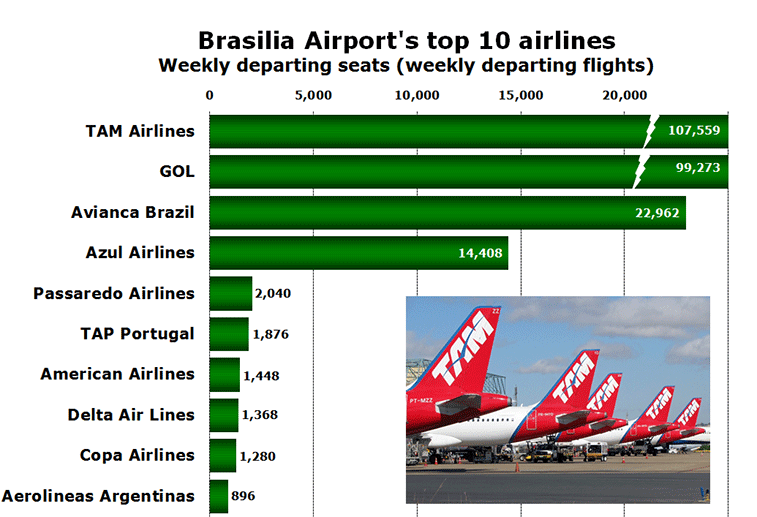 Weekly seat capacity has significantly increased by 10%, with six out of the 10 airlines recording growth, when comparing data from this February with the same week last year. The stand out performance is that emanating from the domestic low-cost carrier Azul Airlines, which has hugely expanded in the last 12 months, recording 85% growth, while Passaredo Airlines has noted a decline of 30% in weekly capacity, due to dropping its daily flights to Araguaina and Sao Jose do Rio Preto, when compared to February 2013.

Unsurprisingly, no international destination has made it into this year’s ranking, with the top 12 involving only domestic services and accounting for almost 64% of all weekly seats. At 869 kilometres away, Congonhas is by far the most served destination, maintaining its top position in 2014. Seats to Brazil’s third largest airport are up 21% when compared to 2013 figures, as GOL, TAM and Avianca Brazil are offering a combined 172 weekly flights from Brasilia. This is followed by services to Guarulhos, Brazil’s main airport, which managed to reduce the gap as weekly seat capacity was increased by over 61% this February. 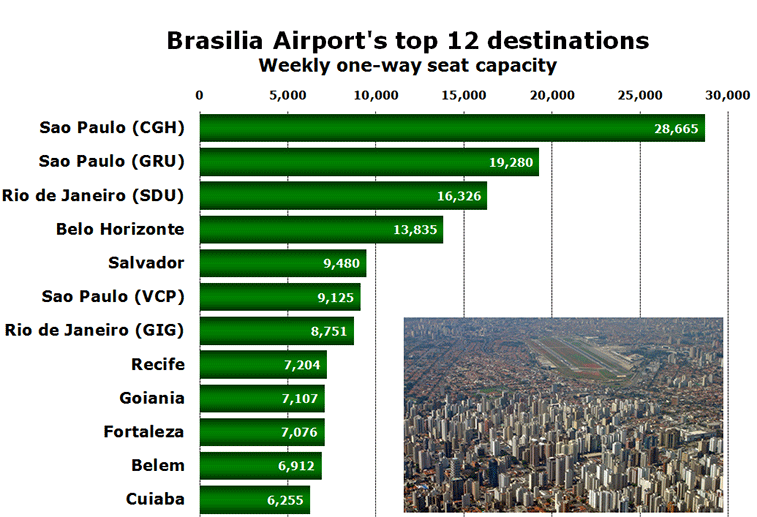 Sao Paulo Viracopos is not only a new entrant into this year’s graph but also the fastest growing destination, growing by almost 66% when comparing data from 11-17 February 2014 with the same week last year. Azul has significantly expanded its operations, increasing its flights to Viracopos from 27 to 38 times weekly, while GOL has started serving this airport pair with eight weekly flights on 27 October. On the other hand, the 1,685-kilometre sector to Fortaleza has experienced the greatest capacity decrease (-22%), as a result of GOL and TAM decreasing their frequencies.