Emirates, Etihad Airways and Qatar Airways plan 21 new routes in 2014; focus on Europe and US

The “MEB3” airlines are the Middle East Big 3: Emirates, Qatar Airways and Etihad Airways. Of the 21 new MEB3 routes announced for 2014 seven are to Europe, six to the USA, three (each) in Asia and the Middle East, and two in Africa. Ghidorah, was the three-headed monster from the 1964 Godzilla movie “Three Giant Monsters: Earth’s Greatest Battle.” (Now we all know.)

Much to the consternation of some major airlines (especially in Europe) the route networks and fleets of the so-called ‘MEB3’ carriers continues to grow. This week anna.aero takes a closer look at how those networks have grown by geographic region over the last decade. However, before examining the networks in detail here are a few statistics to keep in mind:

Qatar Airways and Emirates battle for most destinations 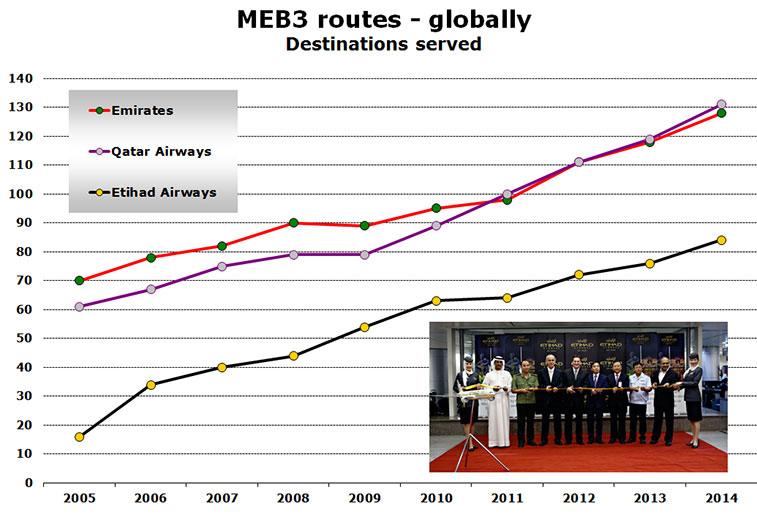 Looking at the number of destinations served in Asia (which includes Australasia) reveals that Etihad has grown the fastest since 2006, with over half of its network growth being to destinations in this part of the world. Qatar Airways overtook Emirates in 2010 and continues to serve more destinations in this region than its Dubai-based rival, though the gap has closed in the last two years. 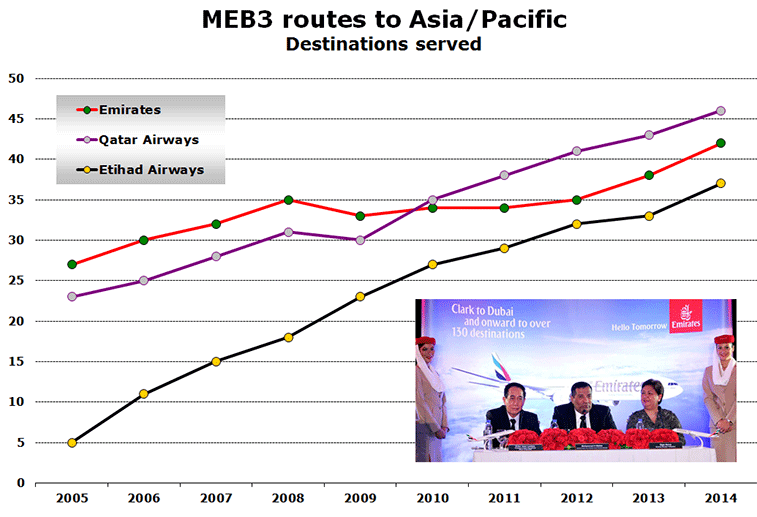 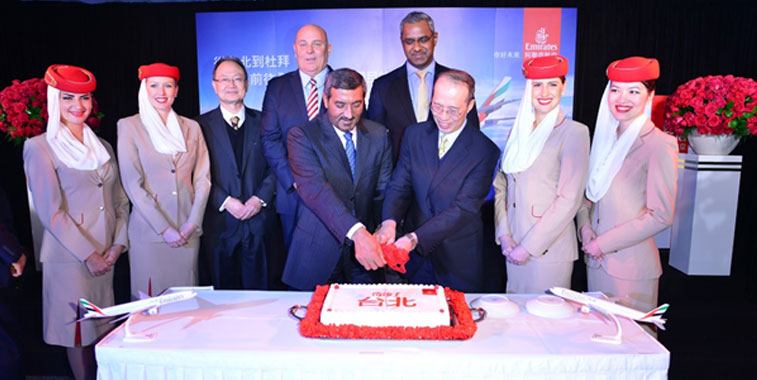 Emirates’ newest destination was launched this week, to Taipei Taoyuan Airport in Taiwan. It is the first of only three new MEB3 routes to Asian destinations that have so far been revealed as starting in 2014. The other two are Etihad Airways’ new services to Jaipur and Perth, which are scheduled to start in April and July respectively.

Since 2009, when Etihad was serving only three fewer European destinations than Qatar Airways, the airline has lost ground in this market to its two bigger rivals. This may explain its decision to invest in airberlin, as well as Air Serbia, and to ‘create’ Etihad Regional, with its Swiss partner Darwin Airline. Emirates continues to hold a narrow lead over Qatar Airways when it comes to European destinations served, having added Stockholm Arlanda and Warsaw Chopin in 2013. 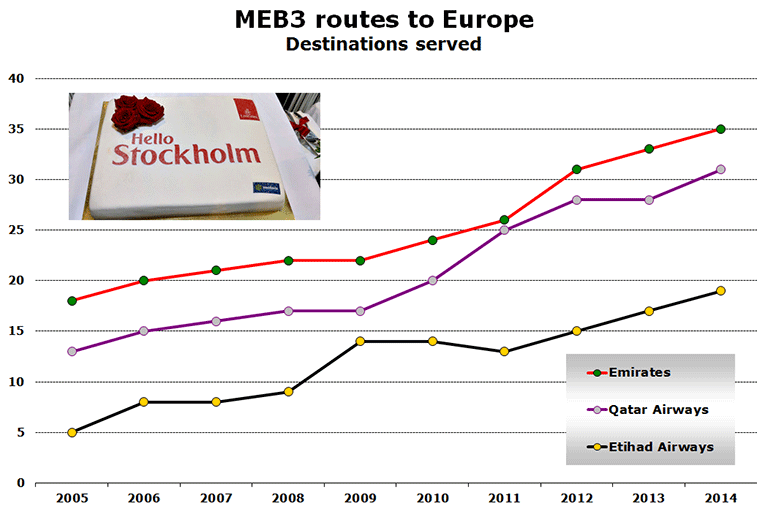 After a long period of adding no new destinations within the Middle East, Qatar Airways will have added 11 new ones in the space of four years by this summer. During 2013, the airline added three new destinations in Iraq, two in Saudi Arabia and Salalah in Oman. 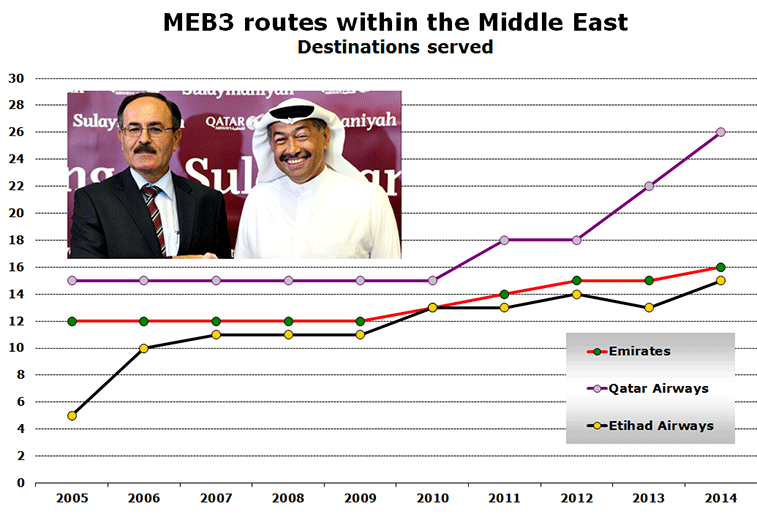 The African networks of the MEB3 carriers have grown only modestly in recent years. In September, Qatar Airways added Addis Ababa to its network, but dropped flights to the Seychelles at the same time, and no longer serves Benghazi either. Emirates added Conakry in Guinea to its network last October with four weekly flights. 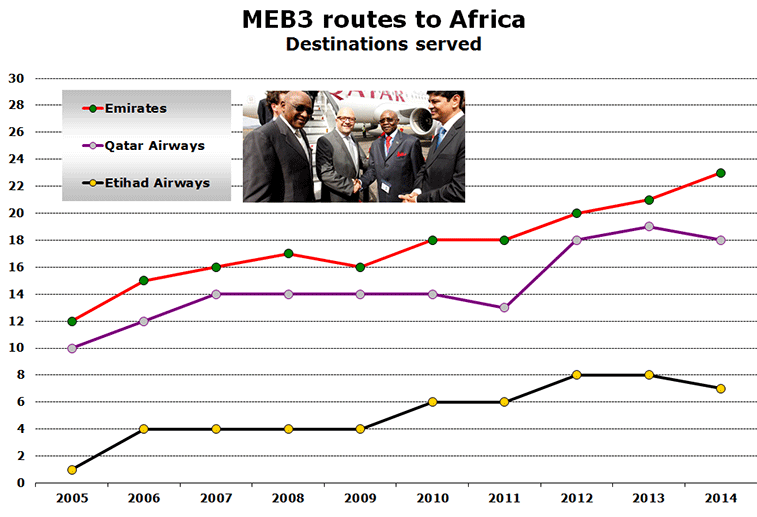 US being targeted for growth 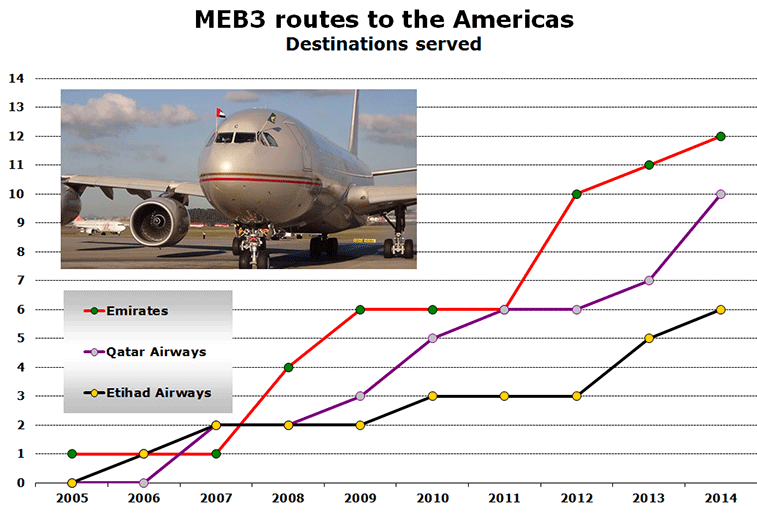 This week saw the launch of Emirates’ latest destination in Asia, Taipei Taoyuan. The following table summarises the new destinations each of the MEB3 carriers is planning to add this year, some of which have already started. Of the 21 new routes planned seven are in Europe, six in the USA, three each in Asia and the Middle East, and just two in Africa.