Germania to launch 11 new routes in first half of 2014; corporate charter services increasingly important for its network strategy As part of its 2014 network expansion, Germania has just launched weekly services on the 3,038-kilometre sector between Erfurt and Funchal in Madeira on 4 February. A total of 10 more services are scheduled to be added in the first half of 2014, all being operated to sun destinations.

Germania is a Berlin-based carrier, which was established in 1979, since when it has operated both scheduled and charter flights to destinations within Europe, north and western Africa and the Middle East, as well as aircraft lease services. The privately-owned carrier has grown rapidly in the past years, handling over 1.6 million passengers in 2013, 60% more than in 2012. According to its official website, the carrier is currently operating a mixed fleet of 10 737-700s and eight A319s, but plans to extend its fleet to 22 aircraft to accommodate future growth for S14. The airline itself promotes the fact that it has four bases: Bremen, Düsseldorf, Erfurt and Munich. Germania is also the parent company of Gambia Bird Airlines, which was established in 2012 as part of the airline’s desire to expand its presence in Africa.

Half of top 12 routes are corporate charter services

Analysis of Innovata schedule data for this February indicates that the carrier operates 36 routes across a total of 32 airports, including both its scheduled and charter services. Germania’s top 12 routes represent 31% of total weekly seat capacity, with half of them being classified as corporate charter services (which are highlighted in the chart below). In fact, this week’s top position accounting for the majority of weekly seats (8.5%), is the Finkenwerder ― Toulouse airport pair, and is served by the carrier as a corporate charter flight to transport Airbus’ employees between the Hamburg plant and the final assembly facility in Toulouse. 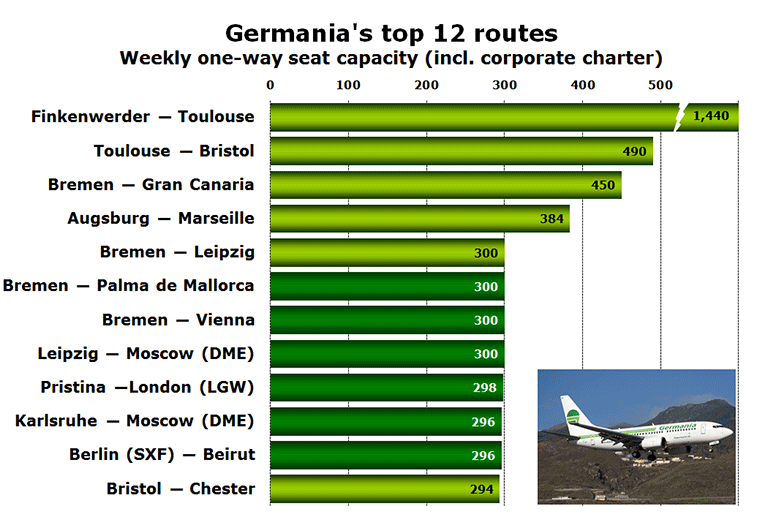 Germania’s weekly seat capacity experienced 23% growth when compared to data from the same week last year, with an array of new entrants into this year’s ranking. Actually, the 2,718-kilometer sector between Berlin Schönefeld and Beirut is the only route that was operated by the airline last February, with the other 11 being added over the last 12 months. Overall, Germania’s network is relatively dynamic, changing each year due to the carrier’s strong focus on charter routes and aircraft leasing (both wet and dry).

45% of seats to and from Germany

Despite serving 14 countries, Germania is still predominantly a German airline according to Innovata capacity data, with 45% of its seats in February 2014 having an origin or destination there. This figure has increased over the last year, growing 1% from 44%, owing to increasing the frequency to and from German destinations by 50% to 60 weekly flights, when compared to the corresponding week last year. France is not only the carrier’s largest international market but also the fastest growing one, having increased by over 700% in the last year, and accounting for 15% of Germania’s weekly seat capacity. Four new corporate charter services were launched to French destinations as part of carrier’s contract with EADS, namely three to Toulouse and one to Marseille for a combined 35 weekly flights. 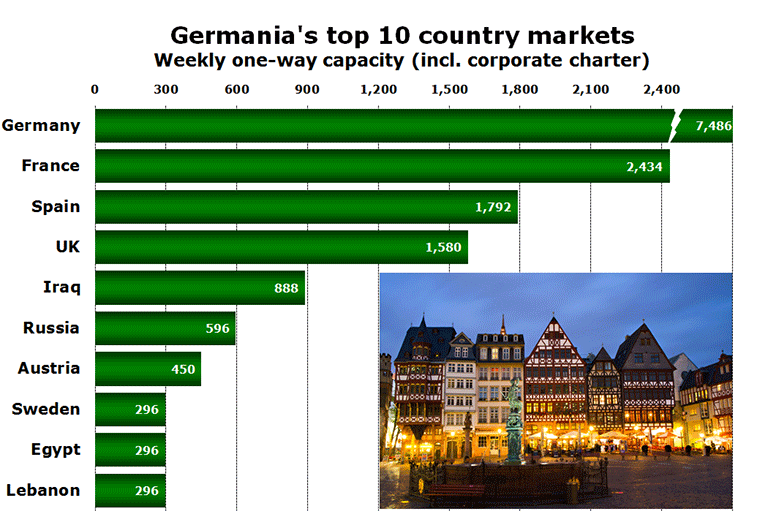 In the past 12 months, three new entrants have made it into this year’s table, namely the UK, Russia and Austria. A total of three UK destinations London Gatwick, Bristol and Chester have been added since last February, while the airline launched twice-weekly services to Moscow Domodedovo from Leipzig on 5 December and from Karlsruhe/Baden-Baden on 12 December respectively. A recent inclusion into Germania’s served countries is Austria, with flights from Bremen to Vienna launched on 7 November and to Salzburg inaugurated on 14 December respectively.

Germania is looking forward to expanding hugely its network in the course of this year, with a total of 11 routes being added in the first half of 2014. Moreover, the airline has already launched weekly services on the 3,038-kilometre sector between Erfurt and Funchal on 4 February, which constitute its first scheduled operation to mid-Atlantic territory. Taking into consideration the leisure market that is a core part of the carrier’s network strategy, all 11 services will be launched to sun destinations, with Antalya being the most served new addition with services from six German airports. In fact, analysis of this year’s new routes reveals that all 11 services will be operated with just one or two weekly flights that involve relatively low competition, which would be a reasonable recipe for Germania’s long-term success.