American Airlines launched weekly services on the 2,120-kilometres sector from Dallas/Forth Worth to Roatan on 23 November, the carrier’s second route to Honduras.

Located in Central America, Honduras borders Guatemala to the west, El Salvador to the southwest, Nicaragua to the southeast, the Pacific Ocean and the Gulf of Fonseca to the south, and the Gulf of Honduras to the North. The country, which was a part of the Spanish empire, has an estimated population of 8.2 million. Honduras’ main airports, which dominate air traffic with 98% of weekly seats, are San Pedro Sula, Tegucigalpa, La Ceiba and Roatan, while the remainder of services are split between the other three airports.

Analysis of Innovata schedule data indicates that, while the trend was fairly uneven in the second part of the last decade and with all airports peaking in 2009 at a combined 1.9 million annual seat capacity, Honduran commercial airports have experienced decline since 2009. In fact, December 2013 results in 14% decrease when compared to the same period 10 years earlier. However, capacity growth has visibly accelerated in recent years at Roatan, recording a significant increase of 53% in 2013, when compared to 2004, with American Airlines having recently arrived on 23 November from Dallas/Fort Worth. 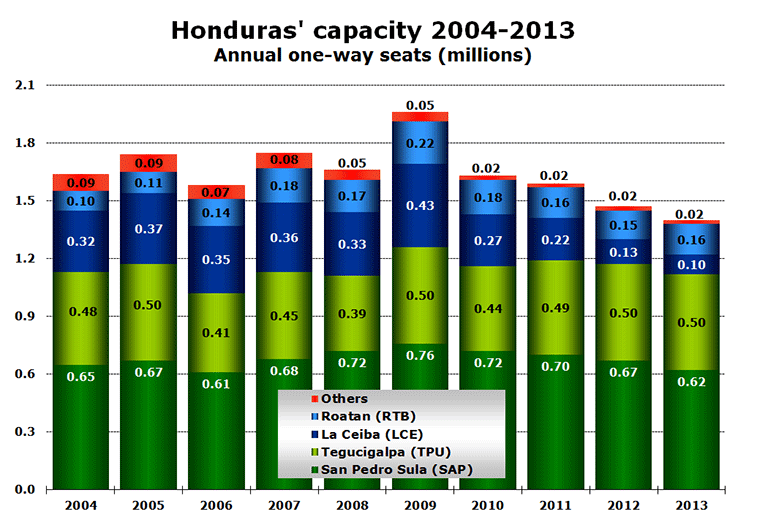 Furthermore, in the same timeframe, Tegucigalpa’s annual capacity grew by 3.8%, while both San Pedro Sula and La Ceiba decreased, with the latter experiencing a massive decline of 77%. Looking back 12 months to December 2012, Roatan offered 7.8% more one-way seats, while all other main airports, San Pedro Sula (-6.7%), Tegucigalpa (-0.6%) and La Ceiba (-25%) experienced capacity decreases.

Avianca controls 28% and 24% of seats and flights

The top 12 airlines serving the Honduran airports represent 99% of total weekly capacity. Looking at this week’s ranking, there is no surprise that Avianca is the largest carrier, as it controls 28% and 24% of weekly seats and flights due to having integrated TACA Airlines’ operations and network in May 2013. This February, the carrier operates on a total of 10 routes from Honduras, of which six are international services. San Salvador is the airline’s most frequently served international destination with a combined seven daily flights from Roatan, San Pedro Sula and Tegucigalpa. 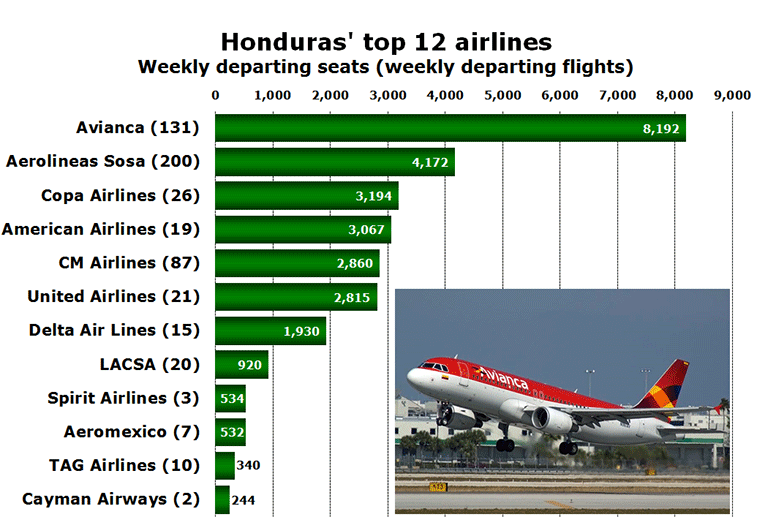 Weekly seat capacity went up 7.6%, with five out of the top 12 airlines noting growth when comparing data from 11-17 February with the same week last year. The stand out performance is that emanating from Aerolineas Sosa, the La Ceiba-based carrier, which recorded 29% growth, cutting the gap between itself and Avianca. On the other hand, American experienced the greatest capacity decrease (-13%), owing to reducing its frequency from twice-daily to eight times weekly on the 1,394-kilometres sector between San Pedro Sula and Miami.

Honduras claims #1 country market from the US

As of February 2014, the domestic sector noted 21% growth when compared to data from the same week last year, overtaking the US and becoming the largest country market with a share of 33%. Honduras’ domestic carrier, CM Airlines, has hugely expanded in the last 12 months, increasing its weekly seat capacity by 240%. Even though weekly capacity to the US declined by 11% this February, the country market is not far behind the first position, with American, Delta Air Lines, Spirit Airlines, United Airlines and Avianca operating a combined 67 flights from San Pedro Sula, Tegucigalpa and Roatan. 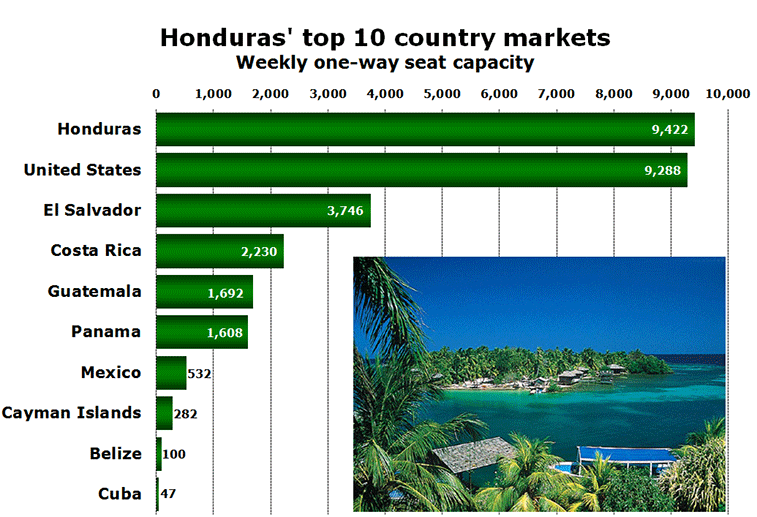 Nonetheless, the fastest growing country market from Honduras is Guatemala, which has grown by nearly 150%, when compared to 2013. TAG Airlines, CM and Aerolineas Sosa have all started serving this market in the course of last year from the country’s two primary airports. Furthermore, Belize is a new entrant into this year’s ranking, as a result of Tropic Air launching a combined 10 weekly flights from Roatan and San Pedro Sula to Belize City.