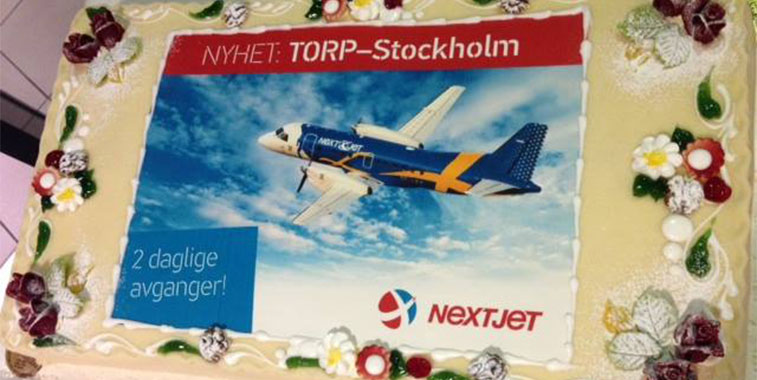 This impressive cake was baked to celebrate the introduction of NextJet’s up to twice-daily flights between Oslo Torp and Stockholm Arlanda, which began on 10 February. The airline’s only other service to Norway is between Vaxjo and Oslo Gardermoen, which operates every weekday.

Operating a fleet of 17 turboprop aircraft (12 Saab 340s and five British Aerospace ATPs), Sweden’s NextJet would appear to be ironically named. The airline’s network is focussed on Stockholm Arlanda, from where it currently operates to 15 destinations non-stop, and can claim to be the airport’s third biggest carrier in terms of weekly departures (over 180), and fourth in terms of seat capacity, after SAS, Norwegian and Lufthansa. Although concentrating on the domestic market, and with the stated goal of wanting to shrink Sweden a little, this week has seen the airline venture further into the international market with the launch of new flights to Kokkola and Pori (both in Finland) and also Oslo Torp (in Norway).

According to schedule data for this summer, NextJet’s busiest airport by far is Stockholm Arlanda, but after that it’s quite close in terms of weekly departures. Thanks to the airline’s new services to Pori and Kokkola, both airports feature prominently in the airline’s rankings. There are 17 weekly flights between Stockholm and Pori, 12 of which carry on to Kokkola. Pori had been connected to Helsinki by Flybe’s thrice-daily flights until the airline suspended them in 2012. Now the airport has up to three daily services to Helsinki provided by Air100, whose flights are operated by Central Connect Airlines. NextJet’s new service to Stockholm Arlanda will provide an alternative gateway to global destinations. Non-Swedish airports are highlighted in the following graph in bright green. 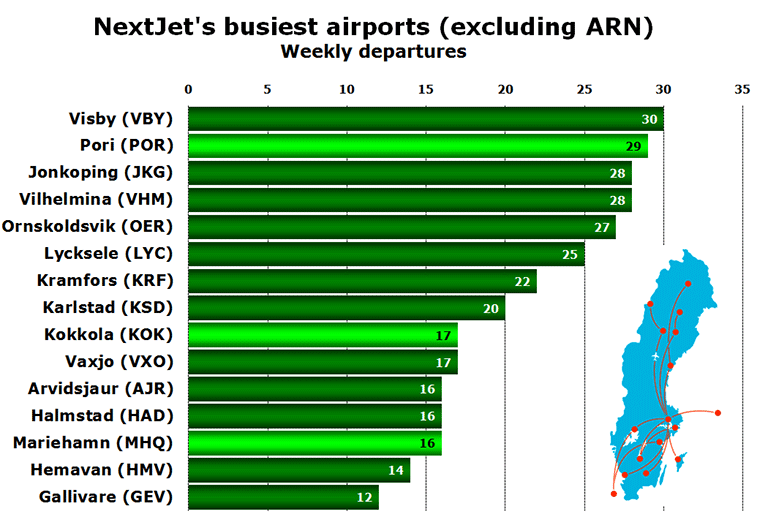 While the airline operates between 85 and 95 departures on weekdays this summer, and 47 on Sundays, NextJet operates just nine flights on Saturdays, highlighting the fact that its core target audience are business passengers.