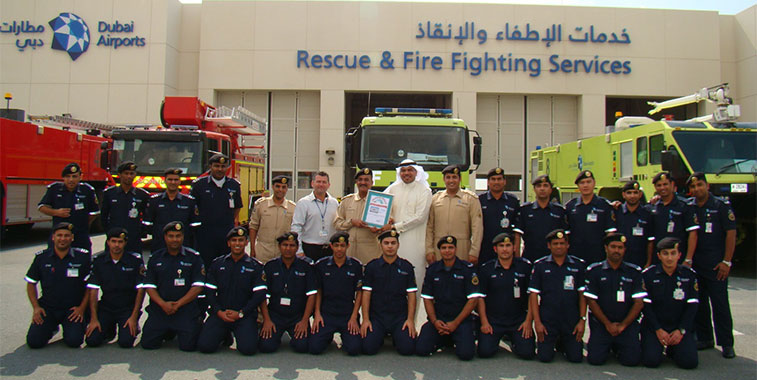 The Dubai Al Maktoum fire crews are very proud of winning their second ever internationally-recognised award and also their second ‘Arch of Triumph’ award. Their score of 37.4 is the highest ever recorded in the competition. Pictured in the centre of White Watch with the certificate are CFO Khalid Ismail AlMuhairi; DCFO Haydn Beynon; and Station Manager Rashed Aziz.

This week’s winner is Hofuf in Saudi Arabia — a first time victory for an airport in the oil-rich kingdom. The winning FTWA was for the start of flydubai services from Dubai, which puts the UAE-based LCC in an elite club of just two airlines, along with Japan’s Peach Aviation, as the only airlines to have received an ‘Arch of Triumph’ award twice. Hofuf’s win also means that the Middle East joins Asia to top the regional table so far in 2014, with two victories each, leaving Europe languishing in #3 spot. 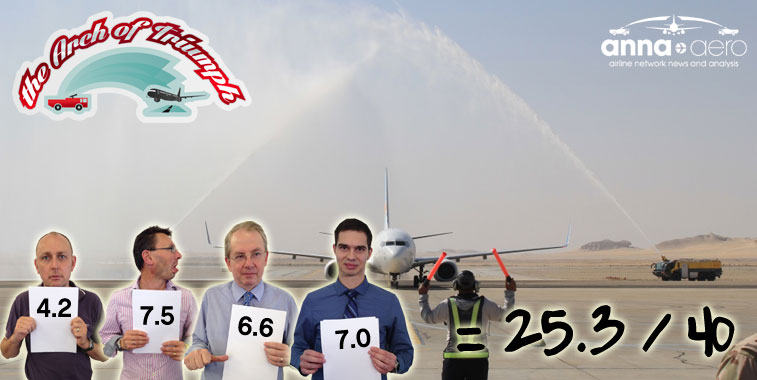 Swiss chocolate would not last long under the Saudi sun.

Marc: 4.2 Maybe the fire crews were watching the ramp operative too much and tried to match the angle of his batons with their arch? The result is some severe ‘Tobleroning’, which would last about five minutes under the Saudi sun, before turning into a wet mess…bit like this FTWA.

Paul: 7.5 This is a much-needed route to the airport serving the world’s largest oil field at Ghawar. Saudi only recently approved Hofuf airport’s international status, so 300,000 must-travel expatriate oil workers will have hungrily rushed past those fire trucks to climb on board. Those aren’t just ordinary water cannon salutes – those are gushers! This route will be a cash machine!!!

Vlad: 7.0 A good attempt by Hofuf’s fire fighters, although they seem to have ended with a triangular FTWA, aka ‘Tobleroning’. Nonetheless I like it (compared to the other masterpieces) as it features a symmetrical dual setup of the two monitors and a great landscape in the back. 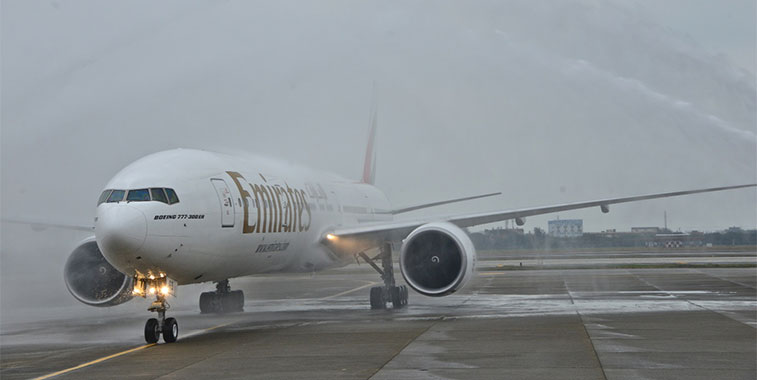 Believe it or not, there are four tenders on this FTWA…but where are they?

Marc: 6.3 Taipei Taoyuan came a close second back in October last year, when on their first FTWA attempt they were narrowly beaten by a Spielberg-esque effort from Volgograd. They had four tenders out that time, but only three were firing at the important moment. This time we have all four firing but we can’t see the tenders…or the arch that well either. Oh well…third time lucky?

Paul: 5.3 Quite possibly Taipei Taoyuan has sold the four fire trucks that are alleged to have created this “arch” and made do with a garden hose out of camera shot. I’m awarding these points in order to not be totally discouraging. Come on — we know you can do it — try harder!!!!!!

Ralph: 4.4 That’s a very grey sky to try and spot the (double) arch against. And not a fire truck to be seen to brighten up the composition.

Vlad: 4.5 To be honest, it took me a couple of seconds to notice that there two FTWAs in this photo. I like the idea, but quality is more important than quantity, which in this case leaves a lot to be desired. 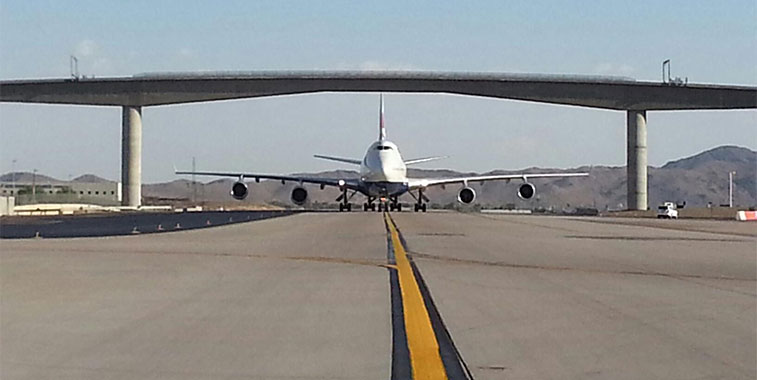 Marc: 2.4 We are reliably informed by our friends at Phoenix Airport that this concrete Automated Train bridge — or arch as they would have us believe — is over Taxiway Romeo with clearly enough room to accommodate a British Airways 747. It scores some points for its impressive height — approximately 103 feet (31 metres). However, it’s more of a rectangle than an arch…and there is a distinct lack of water…so it’s our second disqualification of 2014.

Paul: 9.9 Ye Gods! What stuffy people I have to work with. This is gr888888. But will an A380 pass underneath? When London Gatwick opened their bridge 10 years ago I was told off by the then-owner: “We won’t ever have the A380s here, fool!” Well Emirates starts an A380 service this spring. If PHX can slip the Airbus whale underneath I’ll upgrade this score to a perfect 10.

Ralph: 3.5 Can’t fault the symmetry of the ‘arch’ and the 747 is almost bang on the centre line. But there is one key ingredient missing – water.

Vlad: 5.0 Even though this has nothing to do with a FTWA, I love how our friends from Phoenix Airport tried to think outside the box. However, an arch without water can’t really be considered for our competition according to Article IIc, section 1.4 of the FTWA rule book.