Of the five US services that are scheduled to be launched from China in the first half of 2014, Air China was the first carrier with its thrice-weekly flights from Beijing to Honolulu on 21 January. In addition, other links from China to San Francisco, Dallas/Fort Worth, Washington Dulles and Boston will be inaugurated by United Airlines, American Airlines, Air China and Hainan Airlines.

Examination of data facilitated by the Civil Aviation Administration China (CAAC) indicates that the Chinese carriers achieved 326 million (+11%) passengers until end-November 2013. In fact, over 300 million passengers were carried on domestic flights in the first 11 months of 2013, a double-digit increase of 11% over the corresponding period in 2012. Furthermore, in the same timeframe, the number of passengers served by Chinese airlines on international services noted 14% growth, reaching just over 24 million in the first 11 months of last year. Overall, 2013 was not a bad year for the Chinese carriers, as the average load factor slightly improved by 0.1% to 81.5%. 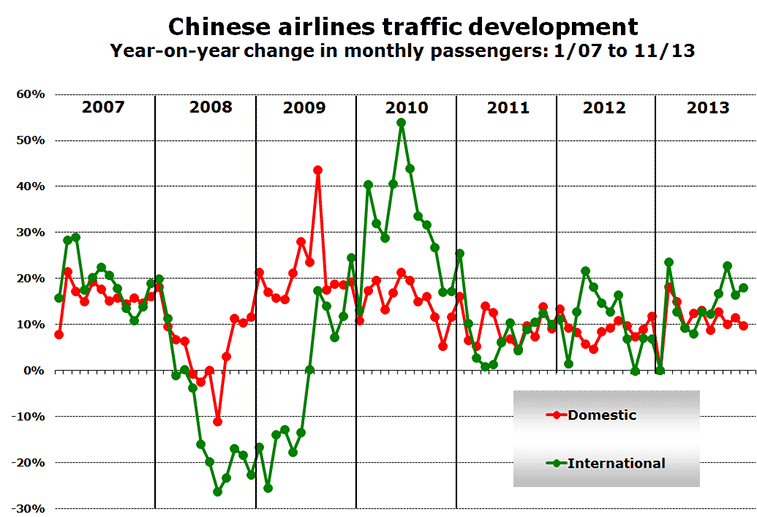 Analysis of Innovata schedule data for February reveals that weekly domestic capacity has slightly increased by 0.6% when comparing data from 18-24 February with the same week last year, with all the three primary Chinese airlines growing their seat capacities by 0.9%, 0.2% and 0.3% respectively. Nonetheless, the fastest growing carriers are the Haikou-based Hainan Airlines, and Xiamen Airlines, the first privately-owned airline in China, both of which have experienced 1.6% growth in weekly domestic capacity. Surprisingly, the country’s low-cost carriers, Spring Airlines and China United Airlines, saw their operations unchanged when compared to 2013 figures. On the other hand, the airline that appears to have recorded the greatest decrease in weekly seats is Tianjin Airlines (-2.3%).

According to anna.aero’s research, 29 new international routes will be inaugurated to and from China in the first half of this year. So far, 2014 saw the launch of 14 services, including Air China adding its first route to Hawaii on 21 January. Moreover, both Lucky Air and Okay Airways launched their first international routes from Kunming to Singapore on 25 January and from Tianjin to Jeju on 31 January respectively.

A total of five routes are expected to be launched to US destinations during the course of the first half of 2014, by Hawaiian Airlines, United Airlines, American Airlines, Hainan and Air China, with the latter commencing four times weekly flights to Washington Dulles this summer. Despite the current on-going issues between the EU and China in terms of the inclusion of aviation in the Emissions Trading Scheme, Air China is launching three services to Vienna, Barcelona and Munich from Beijing this year. Furthermore, due to Hainan taking a 48% stake in Aigle Azur in 2012, the French carrier is looking forward to launching its first long-haul service to China with thrice-weekly flights from Paris Orly on 28 June.