European airport traffic up just over 3% in 2013 The final figures are in for 2013 and anna.aero can reveal which of 43 European countries analysed saw the biggest increase (and decrease) in air passenger numbers. Plus we reveal the top 10 winners and losers at an airport level.

With passenger traffic data for all of 2013 now available for well over 300 of Europe’s airports across more than 40 countries, anna.aero this week takes a closer look at how different countries and airports compared during what was another challenging year for many European economies. anna.aero’s database of traffic and trend data for almost 350 airports across Europe (plus Morocco which has an open-skies agreement with the EU) shows how passenger numbers at airports in these countries in 2013 compared with the same airports in 2012. 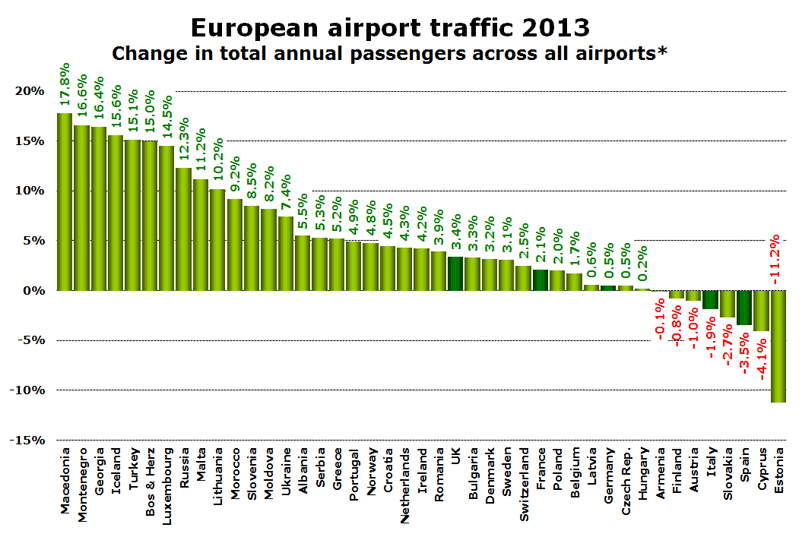 Source: Various. * In some cases data for only the largest airports in a country has been used (e.g. Keflavik for Iceland, or Tallinn for Estonia). For Slovakia data is based on January-November. NB: Dark green bars highlight Western Europe’s five biggest air travel countries; France, Italy, Germany, UK and Spain – or FIGUS as we like to call it.

A total of 43 countries are included in this analysis, up from 37 when anna.aero last did this analysis at the beginning of 2012. Ten countries managed to achieve growth in passenger numbers of more than 10%, but eight of those handled less than five million annual passengers. Impressive growth rates are always easier to achieve with lower absolute numbers, making the performance of Turkey (+15.1%) and Russia (+12.3%) even more impressive, given that both countries handled over 140 million passengers each in 2013.

Wizz Air base sets up rapid growth at Skopje Airport

The Republic of Macedonia’s ‘victory’ is thanks to the 18% growth in passenger numbers at Skopje Airport, which resulted in the airport handling almost one million passengers last year. Wizz Air had made the airport a base at the end of October 2012 with the introduction of six new routes (to Basel, Dortmund, Eindhoven, Malmo, Memmingen and Milan Bergamo), and added two more to destinations in Sweden during 2013. For 2014, four further new routes have already been announced (to Brussels Charleroi, Cologne Bonn, Frankfurt Hahn and Paris Beauvais) which should ensure the airport grows again this year, especially as Alitalia is also introducing flights from Rome in May.

Estonia’s ranking at the bottom of the 43 countries analysed can be easily explained by the fact that the national carrier, Estonian Air, reduced its network and carried 37% fewer passengers in 2013 than it did in 2012. Despite this it remains the leading airline at Tallinn Airport, which saw passenger numbers fall from 2.21 million in 2012 to just 1.96 million in 2013, despite the introduction in 2013 of a new Ryanair service from London Stansted, and the arrival of Turkish Airlines. This summer, TAP Portugal will link the Estonian capital with Lisbon.

Summed across all countries total passenger numbers at Europe’s airports were up just over 3% to  just over 1.7 billion. This is not the same as counting passengers on airlines as airport passengers are counted twice, once at each end of their journey. The UK (232 million) still leads from Germany (203 million) and Spain (187 million), with France (161 million) rapidly being caught by Turkey (150 million), which overtook Italy (144 million) for the first time this year. anna.aero also estimates that passenger numbers across all of Russia’s airports was somewhere between 140 and 145 million in 2013.

The performance of individual airports (handling at least 100,000 passengers per annum in 2012) across Europe varied considerably. Only two airports, Kiev Zhulyany (+113%) and London Southend (+57%) recorded passenger growth of more than 50%, while the rest of the top 10 fastest-growing airports included four airports in Turkey, and one each in the Netherlands, Morocco, Romania and the UK.

At the other end of the performance scale, nine airports reported a fall in passenger numbers last year of more than 20%. Two Italian airports produced the worst results in 2013 with Forli Airport reporting a decline of 85%, as a result of its closure at the end of March 2013. Crotone Airport in the Calabria region also saw an almost 85% reduction in traffic. Warsaw’s Modlin Airport registered a significant year-on-year fall, but this can be explained by the airport being shut for the first eight months of 2013 while the airport sorted out its runway and ILS issues. Now that Ryanair has resumed operations to the airport it is likely to be one of the fastest-growing airports in 2014.

For more detailed figures on the performance of Europe’s airports download our European Airport Traffic & Trends Database spreadsheet which is updated on a weekly basis.