Frontier Airlines is looking forward to a significant expansion in 2014, with a total of 18 new services being inaugurated in the first half of the year. As part of its network expansion, the airline has just launched three new routes from Trenton in New Jersey to Charlotte and Cincinnati on 12 February, as well as to Cleveland on 13 February.

Frontier Airlines is a US low-cost carrier based at Denver in Colorado that has recently celebrated its 20th year of operations on 8 February. Since December 2013, the carrier is a subsidiary and operating brand of Indigo Partners, a private equity firm that pursues acquisitions and strategic investments in low-cost carriers around the world. According to its official website, Frontier operates a fleet of 53 Airbus aircraft, namely 18 A320s and 35 A319s to more than 75 destinations in the US, Costa Rica, Dominican Republic, Jamaica and Mexico. However, the domestic market is a focal element for the airline’s network strategy, accounting for 94% of its weekly one-way seats, 1% less than in the previous year.

The 10th largest US carrier, according to Innovata schedule data for week commencing 18 February 2014, Frontier handled over 11 million passengers in 2012, representing an increase of 6% over 2011 figures. In the first 10 months of 2013, for which data is already available, the airline noted a modest decrease of 1.4% when compared to the corresponding period of the previous year, with 9.3 million passengers achieved until end-October. If the airline continued on this decline trajectory, it would achieve close to 11 million passengers in 2013, based on anna.aero’s forecast. Even though traffic declined in 2013, Frontier did not have a bad year when compared to 2012, as the load factor grew by 1.2% to over 90%. 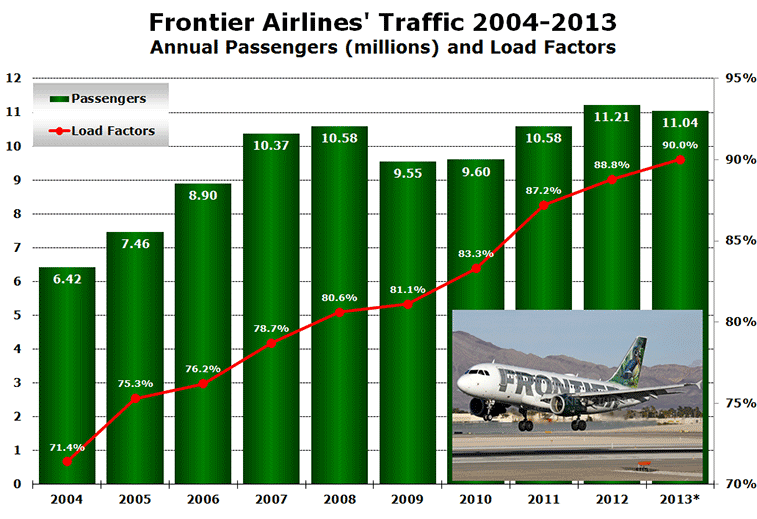 Examination of traffic data indicates that Frontier’s passengers grew by over 72% in 2013, when compared to 2004. A total of 6.4 million passengers were handled by the airline 10 years ago, a number that increased to 11 million last year. Overall, the LCC experienced a growth trend until 2009, when a decrease of 9.7% was noted due to the global economic recession strongly affecting the air transport industry. However, after a short period of operational rationalisation in 2009, Frontier consolidated its annual passenger performance over the last few years, peaking in 2012 at 11.2 million passengers.

Denver-Las Vegas is #1 route by seats

Despite being a low-cost carrier, Frontier operates a hub-and-spoke network from its headquarters at Denver. The airline is the third largest carrier at the airport as it controls almost 16% and 12% of weekly seats and flights respectively, after United Airlines and Southwest Airlines. Analysis of Innovata schedule data for this February indicates that the carrier operates 105 non-stop routes to over 75 destinations. In terms of Frontier’s most significant services, the top 12 routes account for almost 22% of all weekly seats. The Denver-Las Vegas airport-pair is not only the largest route in terms of weekly one-way seat capacity, but also the fastest growing one, having increased by 34% in the last year, and accounting for 2.7% of Frontier’s weekly capacity. The carrier has expanded hugely on the 1,012-kilometre sector in the last 12 months, increasing its frequency by 10 weekly flights to 41 times weekly. 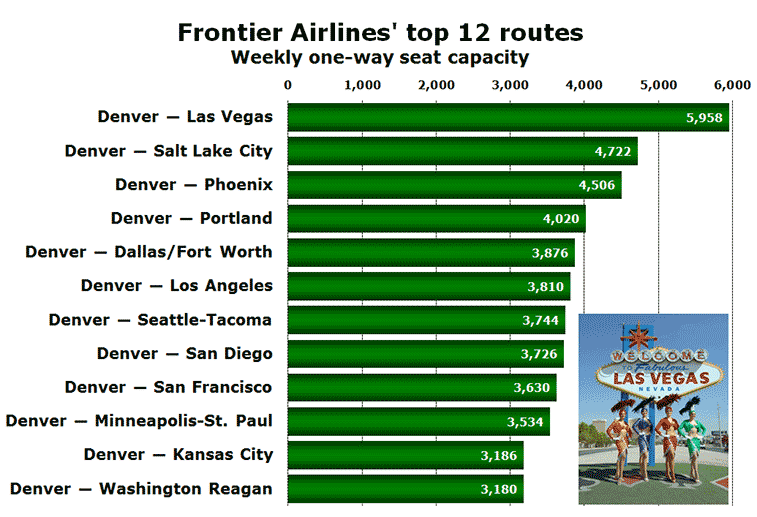 Even though Frontier’s weekly seat capacity has decreased by 4.5%, eight out of the top 12 routes experienced growth, when comparing data from this February with the same week last year. While the sector between Denver and Las Vegas noted massive growth, services to Washington Reagan and Kansas City provided the greatest capacity decreases, -9.9% and -9.1% respectively. Overall, the top 12 routes in Frontier’s network are stable, with no new entrant included into this year’s top dozen.

Analysis of Innovata weekly flights being offered by Frontier from individual airports indicates that the LCC is growing this summer at four of its top 15 airports, with Las Vegas and Dallas/Fort Worth seeing its operations unchanged. The carrier’s main base at Denver will see a frequency decrease of -4% owing to dropping 10 routes since last summer. On the other hand, Frontier has started expanding hugely at Trenton, which will experience a massive growth of over 85% with seven new services being added for S14, when compared to last year’s summer schedule. Across the airline’s network, the number of weekly departures is expected to go down by 0.7% this summer. 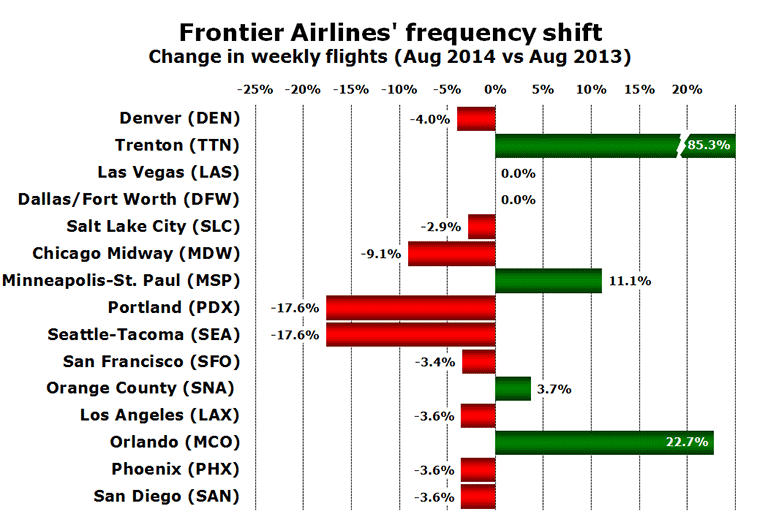 Despite the decrease in capacity, a total of 18 new routes are scheduled to be launched in the first half of 2014. Nonetheless, five services have already been inaugurated so far this year, with the most recent additions being the three services from Trenton to Charlotte, Cincinnati and Cleveland added during the course of this week. Taking into consideration the domestic market that is increasingly important for Frontier’s network strategy, 16 services will be launched between US domestic destinations, with Trenton seeing the addition of nine routes. Furthermore, at three of these airports (Trenton, Wilmington and St. Augustine), the carrier is the only provider of scheduled services. Closer analysis of this year’s new launches reveals that Frontier will face direct competition only on the Denver-Memphis airport-pair (from Delta Air Lines’ six weekly services and United’s daily flights) and on the 1,440-kilometre sector between Cleveland and Orlando (from United’s twice-daily services), which would seem a reasonable recipe for its long-term success.