Last year’s winners throw down the gauntlet in 2014 competition 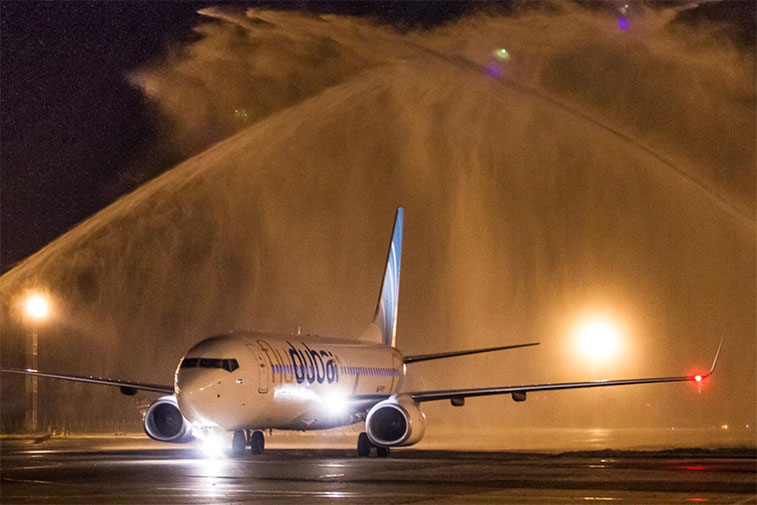 Looking back, other ‘Roman Cross’ FTWAs have not been as successful as this week’s winner. This effort from Krasnodar did however score marginally better that Almería’s entry this week, pulling in a score of 29.5.

This week, Europe has reasserted itself on the global inter-regional ‘Arch of Triumph’ 2014 competition, making the contest an even-tie with two wins each for Asia, Europe and the Middle East. Having won in the first week, Europe’s performance has subsequently been lacking in 2014, so Aena’s effort from Andalusian Almería is a welcome tonic for the region that finished in the #2 spot to North America last year. Ominously for the airport competition, this win from Aena, shows that the world’s biggest airport operator is not prepared to just give away the 2013 title it won with its Tenerife Norte entry. 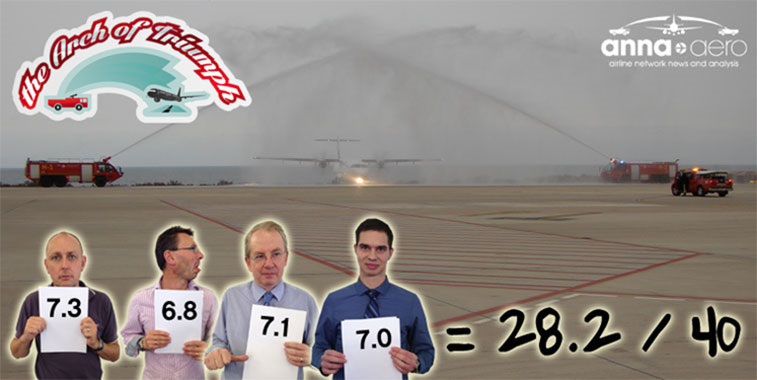 Marc: 7.3 I can admire the symmetry of the FTWA, but I am suffering from a grey overload in this picture — vast grey apron opening up to a vast grey sky. I’m just glad the follow-me and the two tenders offer a splash of colour.

Paul: 6.8* This is a ‘Roman Cross’ of course! A trademark FTWA performed in the airport serving the seat of Roman Catholicism; so what is it doing here in Andalusia? The Pogues song “Fiesta” has the words:

“I am welcome to Almeria

We have sin gas and con leche

We have fiesta and feria”

Confused? So was everyone else. Now the ‘Roman Cross’ doesn’t seem like such a bad idea after all!?

Ralph: 7.1 What’s happened to the sun this week? This week’s two FTWAs are both extremely grey, but we need another 48 before we could present our own version of 50 Shades Of Grey …

Vlad: 7.0 An arch is defined as “a curved symmetrical structure spanning an opening”, which is clearly not in our case. Also known as ‘Tobleroning’ I like this ‘smoky’ FTWA as it involves great coordination by the two monitors.

Marc: 5.7 With one win under its belt already in last year’s competition, JetBlue Airways was probably expecting another easy win in Savannah. Clearly no-one told the firecrew in the tender on the left of the high standards expected…resulting in this ‘Big boy, Little boy’ that will have seen the right-hand side of the aircraft get a thorough clean!

Paul: 6.0* The UK band Erasure had a number called “Blue Savannah Song” inspired by an FTWA by this airport. This isn’t it. This is a hybrid FTWA called a “Savannah Cat”.  It inspired a very successful cat breed of the same name. But, as sometimes happens, the FTWA never caught on. You can probably see why.

Ralph: 4.5 The words of Phyllis Nelson spring to mind seeing this. The left hand truck definitely needs to ‘move closer’ to improve its chances of contributing to a proper arch.

Vlad: 6.5 JetBlue Airways’ arrival at Savannah was welcomed with a classic “Big boy, Little boy” FTWA, which has recently become very popular among fire fighters as there isn’t a week without at least one such ‘masterpiece’. Looking at the following FTWA guide will definitely maximise your performance and cure of the “Big boy, Little boy” syndrome.

*In case you are thinking that Head Judge Paul’s comments are even more random than usual — this maybe because he wrote his ‘reviews’ from his bed while on a skiing holiday in Cortina.