LinksAir makes Doncaster Sheffield base #4; 15 weekly departures from April as Belfast and Isle of Man get direct flights 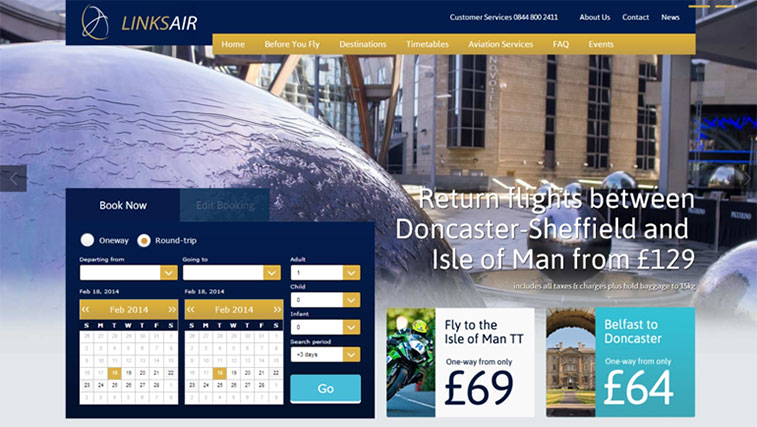 Earlier this week, LinksAir announced the start of two new services from Doncaster Sheffield to Belfast City and the Isle of Man on 11 and 14 April respectively. The regional carrier will join the likes of Wizz Air, Thomson Airways and Ryanair in serving the Yorkshire airport.

LinksAir is a UK-based regional carrier, which was established in 2007, currently operating a fleet of nine to 19-seat Jetstream 31s. On 17 February, the carrier revealed its decision to make Doncaster Sheffield Airport its fourth base, joining its existing Cardiff, Humberside and Isle of Man bases, with a single Jetstream 31 stationed at the airport from April to launch two new domestic services: to Belfast City and Isle of Man airports.

According to the carrier’s latest press release, LinksAir will be operating 15 flights per week from Doncaster Sheffield, once the two new routes will be launched in April.

Analysis of Innovata schedule data for February 2014 reveals that three carriers are already operating from Doncaster Sheffield to 14 destinations. Wizz Air is currently the dominant player at the airport with a flights market share of 52%, closely followed by Thomson Airways (44%). With Ryanair serving a single destination, namely weekly flights to Tenerife Sur, LinksAir will become the new market leader at the airport, in terms of weekly flights, when it launches services in April. While the service to the Isle of Man has never been operated, the 343-kilometre sector to Belfast City was formerly served by Flybe between 2006 and 2011.

The Exeter-based carrier flies Doncaster Sheffield’s only existing domestic service — a seasonal, weekly operation to Jersey which is planned to run from 3 May until 27 September. Thomas Cook Airlines also offers summer-only flights to Dalaman (weekly) and Palma de Mallorca (weekly), and will be joined by Nouvelair Tunisie which will fly to Enfidha (weekly) over the peak season too.

“We are delighted at LinksAir to be making Doncaster Sheffield Airport our fourth aircraft and crew base, supporting up to ten new jobs at the airport and in launching services to Belfast City and the Isle of Man that we are confident will be well supported and have the ability to grow. Belfast is a vibrant city and of growing importance in both commercial and leisure terms to the UK’s fifth biggest City region in Sheffield, while the Isle of Man has such a great appeal as both a short-stay leisure destination and for its unique place in motorsport culture,” said Roger Hage, LinksAir’s Commercial Manager.

“This is fantastic news for the airport and for Yorkshire passengers. These two new routes are a great addition to our offering. Belfast will be a fantastic business route with people being able to set off in the morning and be in Belfast city centre for the start of the business day,” said Steve Gill, Managing Director, Doncaster Sheffield Airport.