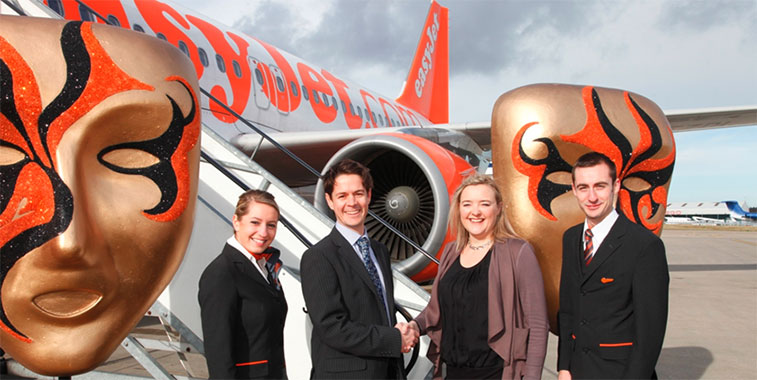 No hiding behind the famous Venetian masks. On 13 February easyJet launched its latest new route from London Luton Airport (to Venice, in case you were wondering), the airport which is still home to the airline’s (brightly painted) corporate headquarters. Luton is now easyJet’s fourth busiest base in terms of weekly flights, but is still #1 at the airport and will serve 37 destinations non-stop this summer.

London Luton Airport is one of the six airports serving the London catchment that between them handled almost 140 million passengers in 2013, up from just under 135 million in 2012. Luton, which ranks fourth among the six airports (behind Heathrow, Gatwick and Stansted, but ahead of London City and London Southend) fell just short of the 10 million passenger mark last year, but this still represents an increase of just under 1% over 2012. 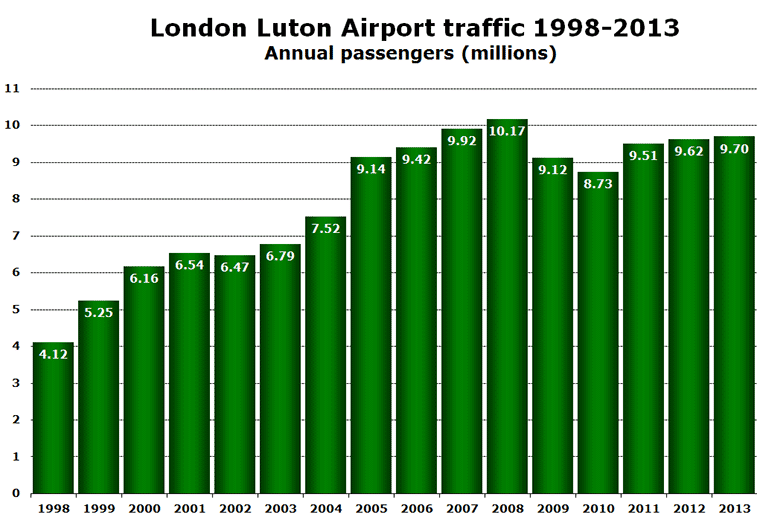 The airport’s seasonality profile has been amazingly consistent in recent years, with traffic peaking each August during the busiest part of the UK holiday season. According to anna.aero’s SVID calculator, the airport scored 4.95 in 2013 which means that its seasonality profile is “good”; not as good as London Stansted (3.18), but better than London Southend (8.43). 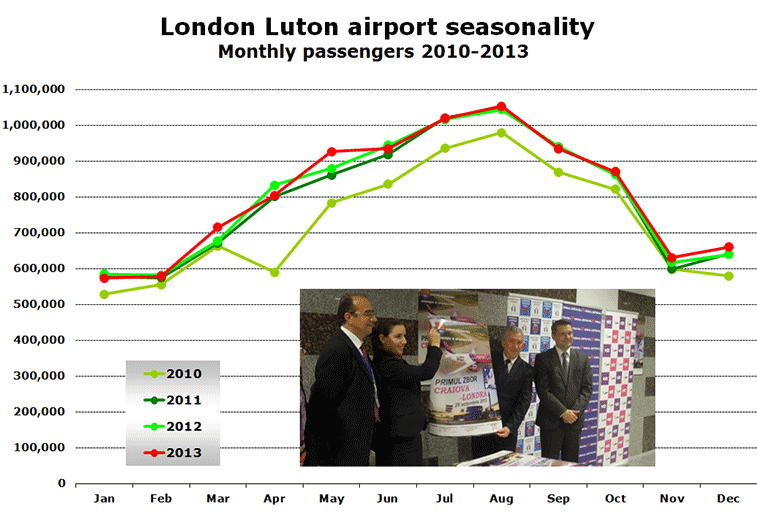 London Luton Airport is where easyJet first began flying from way back in November 1995, and the airline’s headquarters are still there, even though the airport is now only its fourth busiest base after London Gatwick, Milan Malpensa and Geneva. The evolution of easyJet’s operations across the various London airports was examined last year. Luton’s other slightly unusual claim to fame is that although the airport is not a base for Wizz Air, the Central European carrier operates more flights at it than from any of its designated bases.

Last year saw the airport welcome a number of new services including new easyJet services to Mykonos (Greece) and Olbia (Italy); Wizz Air flights to Craiova (Romania), Kosice (Slovakia) and Donetsk (Ukraine); TAROM to Iasi (Romania); and Carpatair to Chisinau in Moldova. According to the airport, it now has 66% of the London-Romania market.

Monarch and Wizz Air growing by 20% this summer

Analysis of schedule data for August 2013 and August 2014 shows that while there is no change to the rankings of the top seven airlines serving the airport, capacity changes vary considerably. While Ryanair and Thomson Airways are showing a small reduction, and easyJet modest growth of under 3%, Wizz Air and Monarch Airlines are both increasing seat capacity by over 20% in the peak summer period.

Last week saw the launch of easyJet’s latest destination from the airport, Venice Marco Polo, and another Italian destination (Catania) will be added at the start of the summer season. At the same time, flights to Istanbul Sabiha Gökçen will end. To compensate for this, Atlasjet will begin flights to Istanbul Atatürk from 2 May, the same day that Monarch Airlines will introduce Naples to its network from the airport. Finally, Wizz Air is launching flights to Sibiu in Romania on 15 June. Early May will also see the launch of two additional leisure routes, with Monarch Airlines introducing flights to Antalya, and Thomson Airways adding Skiathos to its Luton offering.

Simon Harley, Head of Business Development for the airport, told anna.aero this week, “Not only are we launching seven new routes in 2014 but most positively we are seeing these new routes split across five different airlines. This isn’t just one airline recognising the opportunity but a range of both UK and overseas based carriers who see the benefits for themselves and their passengers that come from the airport’s convenient location and compact efficient site.” However, the airport acknowledges there are gaps in its network offering and its top 10 wish list of destinations include Athens, Copenhagen, Frankfurt, Moscow, New York, Oslo, Shannon, Stockholm, Vienna and Waterford.