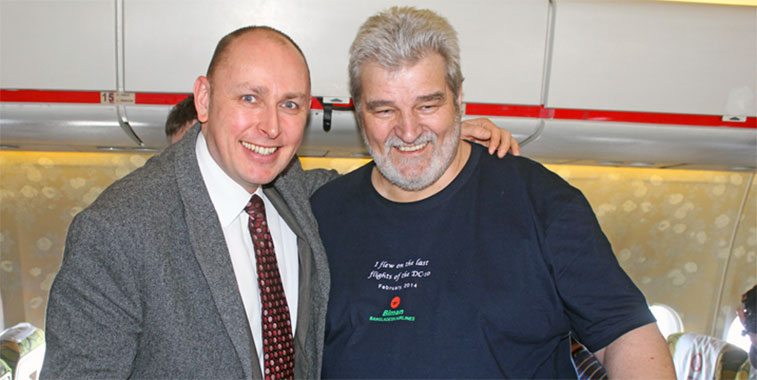 Biman Bangladesh Airlines MD and host for the pleasure flights Kevin Steele (right), along with anna.aero’s Editor Marc Watkins (left). Steele has been in post the airline for the past year, with a long history of senior airline management experience including time at British Airways, Etihad Airways and Arik Air, but even he admitted that the last DC-10 flight was a tear jerking occasion.

Delivered new to Biman Bangladesh Airlines in 1988, the last commercially operated passenger DC-10-30 — S2-ACR ‘New Era’ — flew a series of eight farewell pleasure flights from Birmingham Airport over the extended weekend of 22-24 February. Birmingham was chosen to host the farewell services as it will become Biman’s newest international destination in the summer when it launches twice-weekly flights to Dhaka and New York JFK using its brand new 777-300s. Birmingham will become only the third UK airport to have direct flights to New York JFK and offer the only non-stop service between the UK and Bangladesh outside of London.

The DC-10 first entered commercial service in 1971. S2-ACR was the 445th aircraft to be built out of a total of 446, including 60 for the US Air Force serving as airborne tankers. It easily outsold its competing three-engined wide-bodied rival, the Lockheed Tristar. The DC-10 was followed by the MD-11, a developed successor, of which 200 were built, some are still in airline service today.

The first DC-10 to visit Birmingham was on 30 November 1972 when a Laker Airways DC-10-10 G-AZZC made a demonstration flight for the travel trade. In the intervening years, many DC-10s have visited Birmingham including those from CP Air, Wardair, Airtours, Monarch Airlines and Continental Airlines. 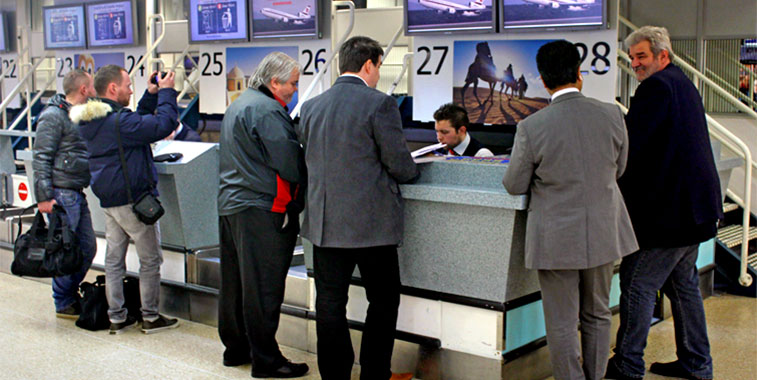 1302hrs — Close to 1,300 passengers from 52 countries were treated to one hour ‘scenic’ flights on the DC-10 over three days, taking in the sights of northern England, up towards Glasgow before looping back down to Birmingham (Image courtesy of Gordon Stretch). 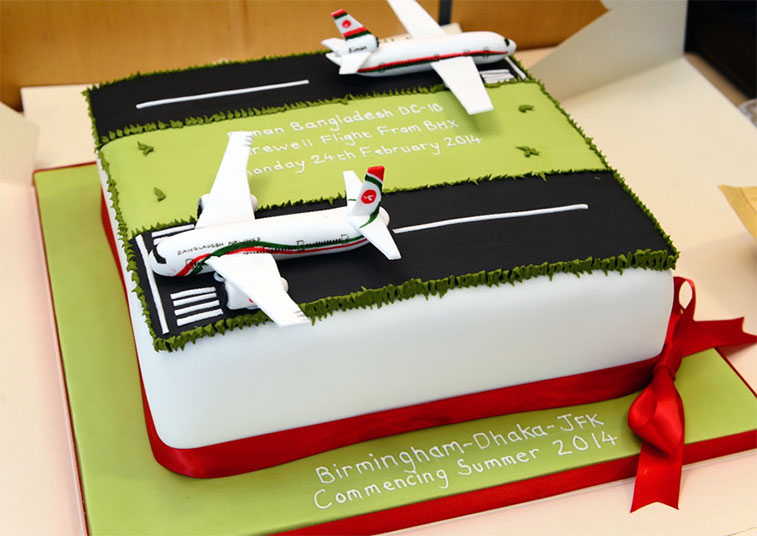 1359hrs — Sweet retirement, sweet arrival: A commemorative cake signifying the departure of the old — the DC-10 at the top of the cake — and the arrival of the new — the 777-300 at the bottom — was given to the passengers on board the last flight (Image courtesy of Stewart Writtle Photography). 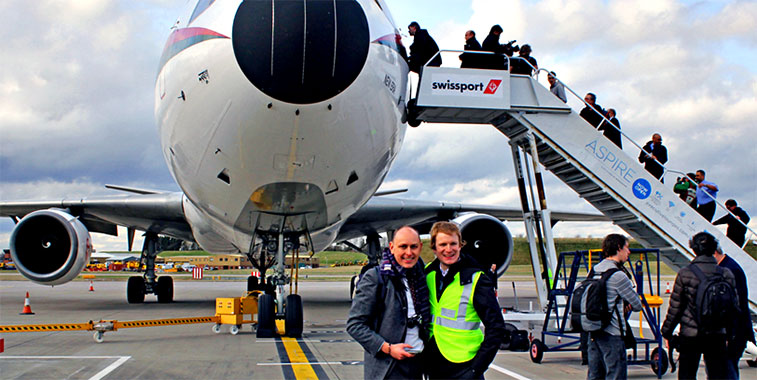 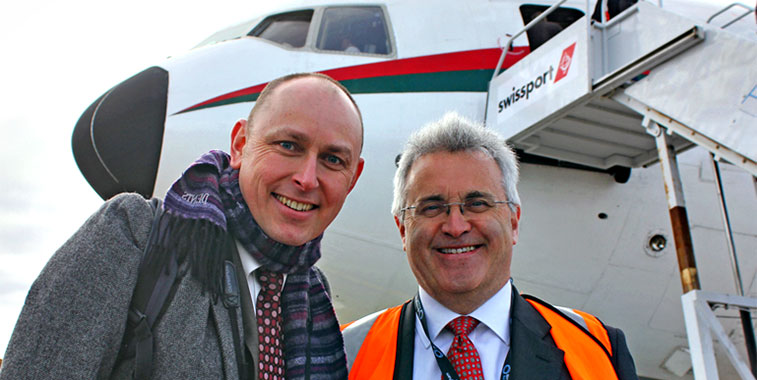 1444hrs — You’re going to need a bigger runway for that. Birmingham CEO Paul Kehoe (right) would be happy to welcome more long-haul services once his £40m 400m runway extension is complete later this spring (Image courtesy of Gordon Stretch). 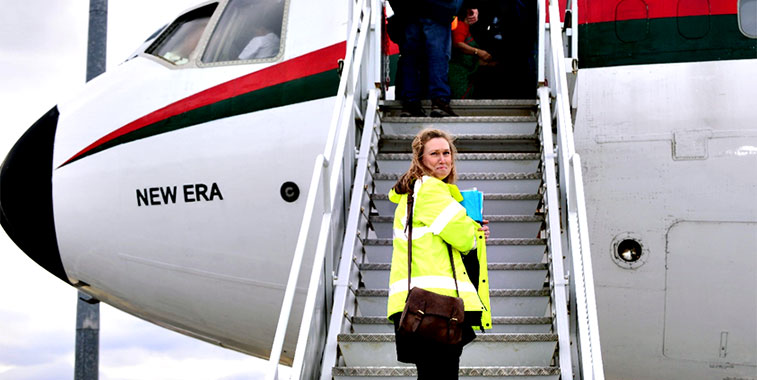 1449hrs — Don’t make me go! Birmingham Airport Communications Manager Justine Howl isn’t a great flyer, but even she couldn’t resist the temptation of flying on the DC-10 (Image courtesy of Stewart Writtle Photography). 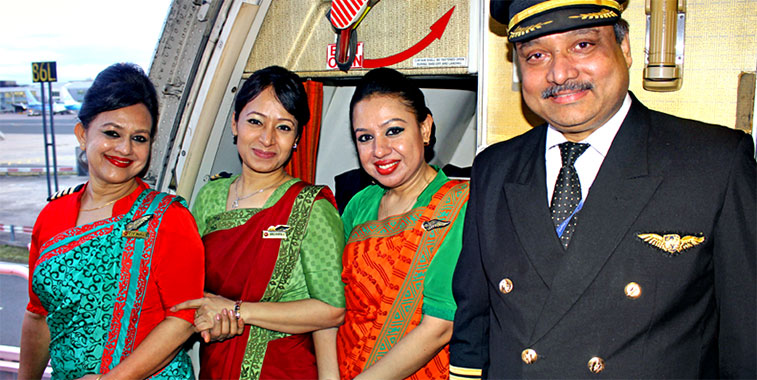 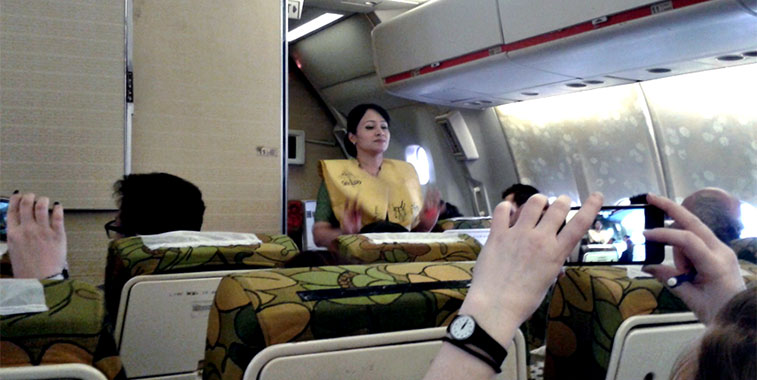 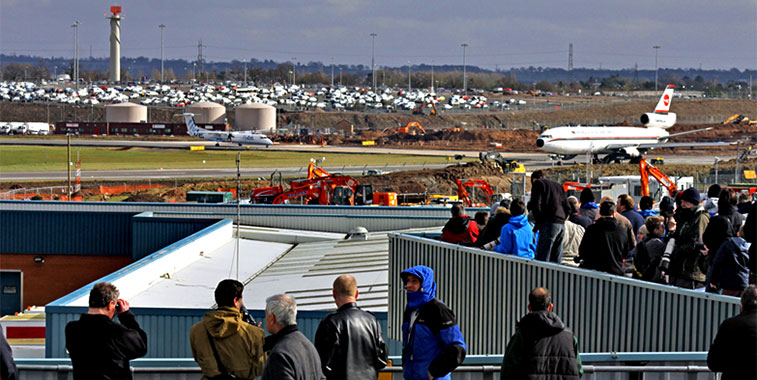 1517hrs — Hundreds of aircraft enthusiasts were present over the three days of flights to witness the historic aircraft completing its final journeys (Image courtesy of Gordon Stretch). 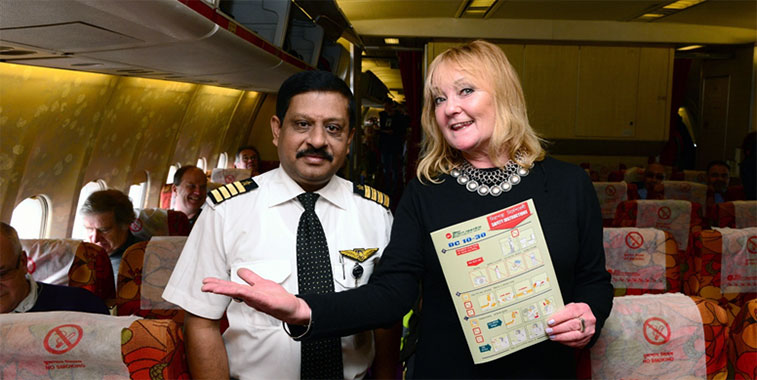 1541hrs — Passengers on board the last flight included BBC radio DJ Janice Long, who, in a previous life, worked as cabin crew on a DC-10 (Image courtesy of Stewart Writtle Photography). 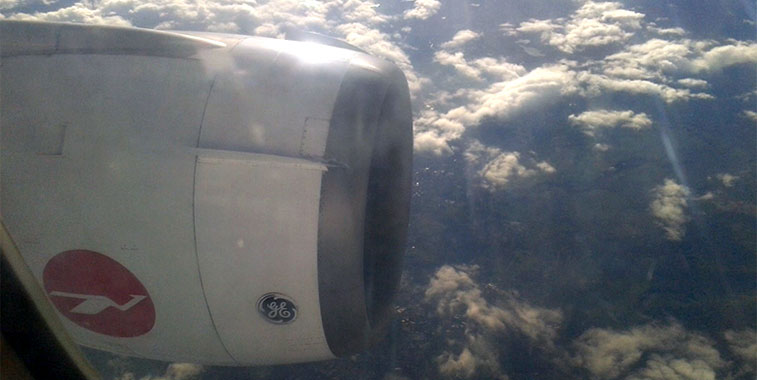 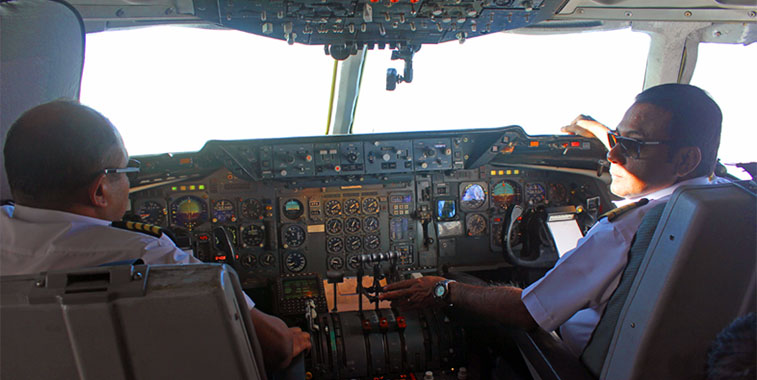 1601hrs — Passengers were treated to a rare glimpse of a working cockpit during their experience (Image courtesy of Gordon Stretch). 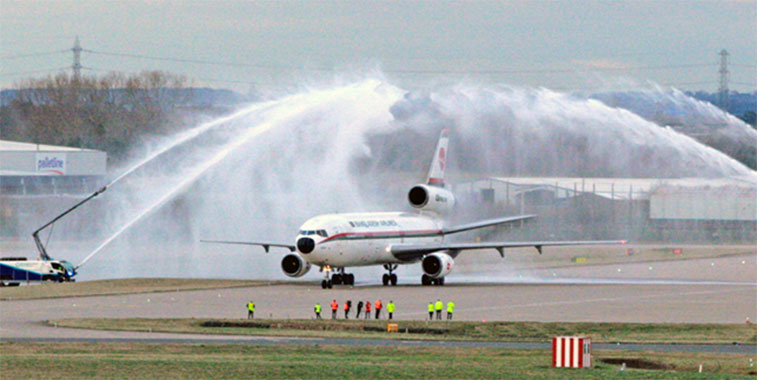 1625hrs — Double ‘Arch of Triumph’ to mark the arrival of the last ever commercial flight on the DC-10. Good practice for the Birmingham Airport firefighters when the 777-300-operated Dhaka and New York JFK services start in June (Image courtesy of Laurence Jones). 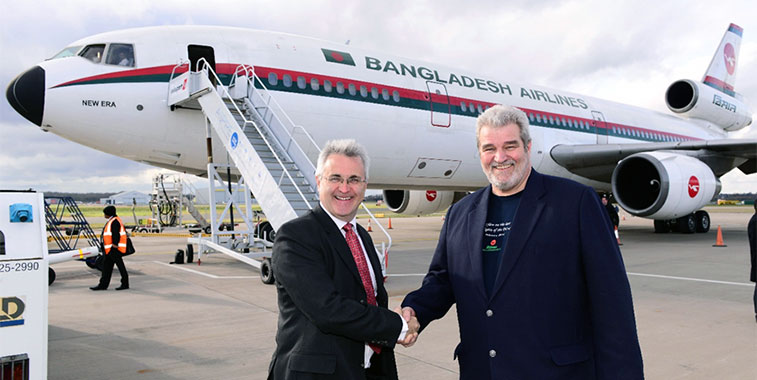 1641hrs — Before you go Kevin. With services to New York JFK and Dhaka sorted, Birmingham’s CEO Paul Kehoe is seen here twisting the arm of Biman’s MD Kevin Steele for a transiting Toronto service too. Outside of New York, the Canadian city has the biggest Bangladeshi population in North America. (Image courtesy of Stewart Writtle Photography) 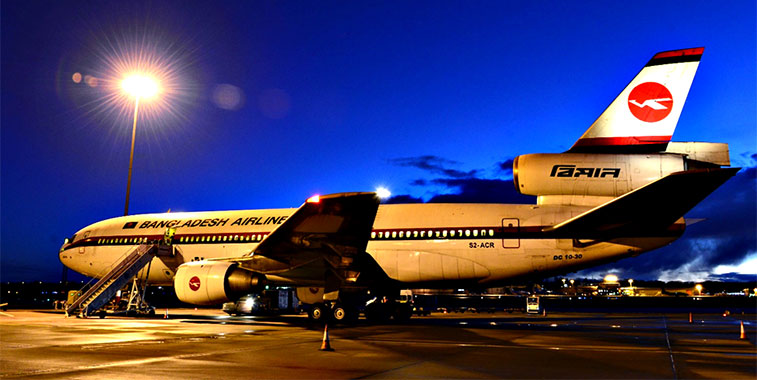 1802hrs — The end of a day, the end of an era. On 25 February, the DC-10 aircraft was flown non-stop back to Dhaka where its parts will be sold. The aircraft departed Birmingham at 1852 on its last ever flight.