Chiang Mai’s latest route launch was courtesy of Thai AirAsia, which inaugurated on 21 February its first Chinese route from outside Bangkok, with the addition of daily flights to Hangzhou.

Established in 1921 as Suthep Airport, Chiang Mai Airport serves Chiang Mai, the largest and most cultural city in northern Thailand, having a population of around 200,000. The airport, which is currently ranked as the country’s fourth busiest airport, behind Bangkok Suvarnabhumi, Bangkok Don Mueang and Phuket airports, serves as an operating base for Thai AirAsia. The airline has launched its first Chinese service from outside Bangkok in Chiang Mai, with the addition of daily flights to Hangzhou on 21 February. 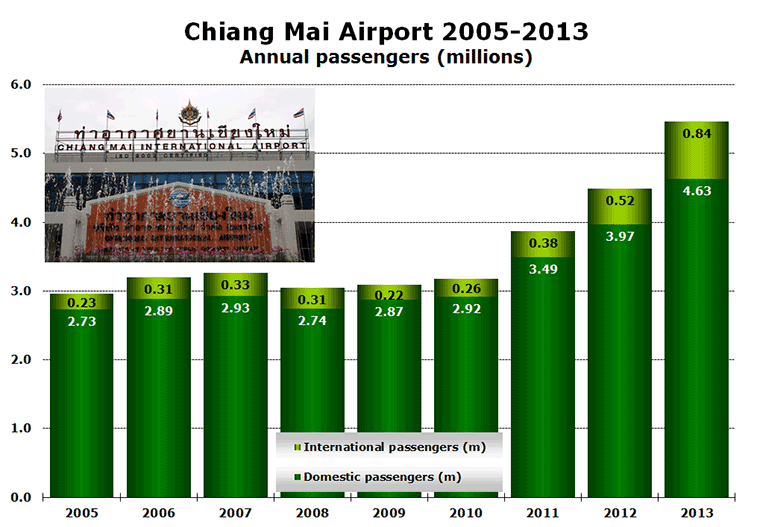 Analysis of data facilitated by Airports of Thailand (AOT) reveals that passenger traffic at Chiang Mai has grown by 85% between 2005 and 2013. The airport handled 5.5 million passengers in 2013 (a new high record), a number that increased from the 3 million recorded nine years ago. Overall, Chiang Mai experienced a trend of growth since 2005, with the exception of 2008, when it noted a decrease of 6.6%. Looking back 12 months to December 2012, the airport’s traffic increased by almost 22%, with the international sector achieving 62% growth, as more than 0.8 million international passengers used Chiang Mai in 2013.

While it was 2013’s #1 airline, Thai Airways’ 9% capacity decrease over the last 12 months has allowed low-cost carrier Thai AirAsia to steal top-spot following its own 43% growth, meaning it has become the largest carrier operating from Chiang Mai, with a market share of over 30%. The second most punctual airline in Asia (according to FlightStats 2013), Thai AirAsia serves seven destinations from the airport, of which four are located within Thailand, namely Don Mueang, Hat Yai, Phuket and Krabi. Ranking second in terms of weekly seats, the Star Alliance member ― Thai ― operates on just two domestic services, to Suvarnabhumi (10 daily) and Phuket (daily). 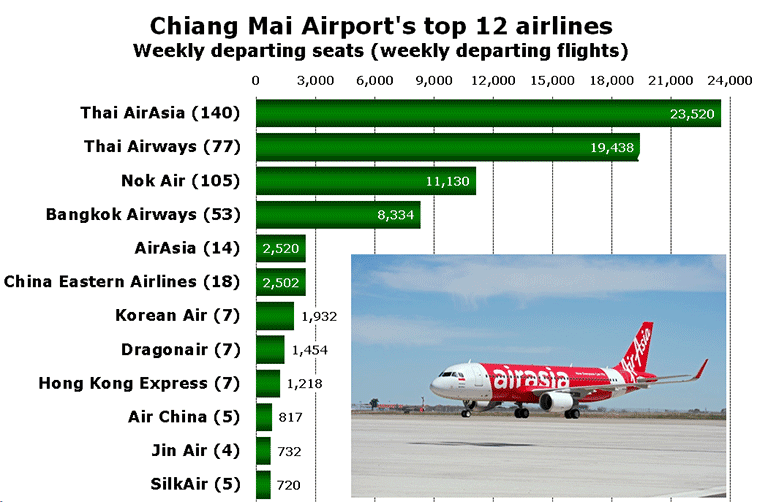 As of February 2014, weekly seat capacity has gone up 16%, with six out of the top dozen carriers noting capacity growth, when comparing data from this February with the same week last year. Ranking sixth, China Eastern Airlines is the fastest growing carrier with an annual growth in weekly seats of almost 200%, as a result of boosting its Kunming services from daily to twice-daily and launching twice-weekly flights to Chengdu and Shanghai Pudong respectively. In addition, three carriers out of the top 12 started operating from Chiang Mai over the last 12 months, including Hong Kong Express, Air China and Jin Air, with the latter launching four weekly services to Seoul Incheon on 30 October.

Suvarnabhumi continues to be top destination

Suvarnabhumi has managed to maintain its top position in 2014, increasing its offering by a modest 0.1% this February. The route to Thailand’s primary gateway has an overall weekly seat share of 33%. This is closely followed by services to Bangkok’s second airport, Don Mueang, which managed to reduce the gap as weekly seat capacity has grown by 2,124 or 10% when compared to data from the same week last year. Overall, the top 12 destinations represent 92% of the total market, which is slightly down from the 96% recorded for the same week 12 months ago. 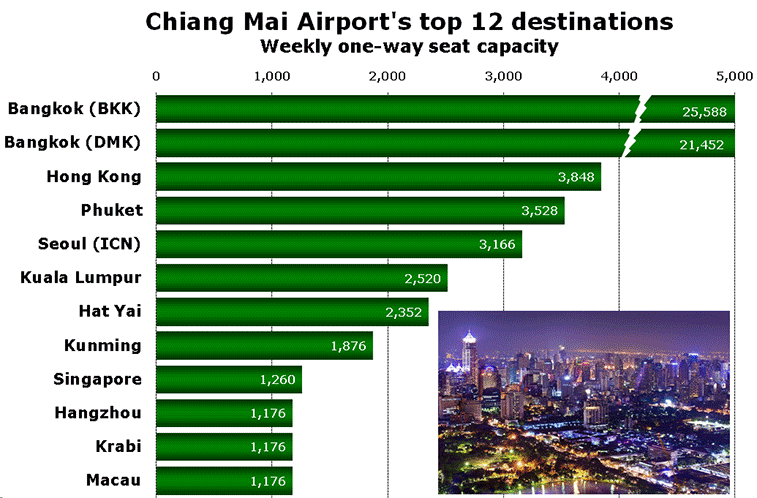 Analysis of Innovata weekly seats indicates that eight out of the top 12 destinations noted capacity increases this February, with Macau seeing its operations unchanged. The 1,635–kilometre sector to Hong Kong experienced the greatest growth (3,216 more seats or over 500%, when compared to the same week last year), owing to Thai AirAsia and Hong Kong Express both having started serving this airport pair with daily flights, as well as Dragonair increasing its frequency from four times weekly to daily. Furthermore, Krabi is a new entrant into this year’s ranking as a result of Thai AirAsia adding its second domestic route from the airport on 15 December.