Vueling launched a weekly service (increasing to thrice-weekly in April) between Barcelona and Dakar on 22 February. Barcelona Airport gave the passengers coloured hats and the airline gave them yellow sunglasses to help commemorate the service. Also worthy of celebration is the fact that over the last 12 months Vueling has grown 500% on services between Spain and Africa.

According to the latest available airline schedule data from Innovata / Diio Mi, scheduled airline seat capacity on routes between Europe and Africa this March will be up a modest 1.7% compared with the same month in 2013. While this suggests stability in the market, a closer look at the airline and country pair level reveals considerable variations. Air France and Royal Air Maroc are the two leading airlines in the market based on weekly seats, both over 50% larger than the next biggest carrier, Tunisair. Eleven of the top 15 airlines are based in Europe, with Royal Air Maroc, Tunisair, Air Algerie and EGYPTAIR the leading African carriers. The fastest-growing among the top 15 is Ryanair, which has increased seat capacity by over 70%, and is now the sixth biggest carrier between Europe and Africa, beaten only by Air France and Turkish Airlines among European airlines. 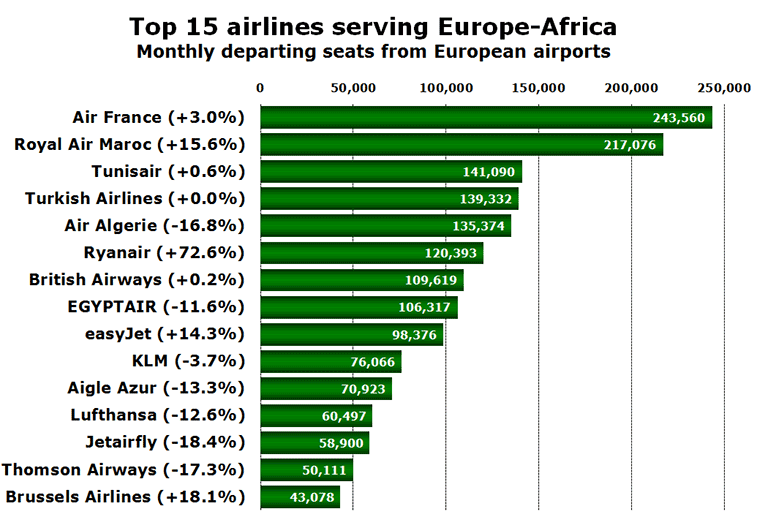 If ASKs (Available Seat Kilometres) were analysed instead, Air France would still lead the way followed by British Airways and KLM, with South African Airways making an appearance in seventh place as a result of its long sector lengths. Among LCCs, easyJet would now be ahead of Ryanair, thanks to its Egyptian services.

Moroccan market booming; Egypt and Tunisia not so much

As recently revealed in our Moroccan trendwatch, this North African state is reporting healthy traffic growth, partly thanks to its ‘Open-skies’ agreement with the EU. Morocco features in six of the top 15 country pairs, and all of them are showing growth compared with last year. Egypt has three country pairs in the top 15 and two of these are showing significant reductions in capacity; Germany is down 35%, and the UK is down 8%, reflecting some uncertainty regarding the current state of the Egyptian tourism market. 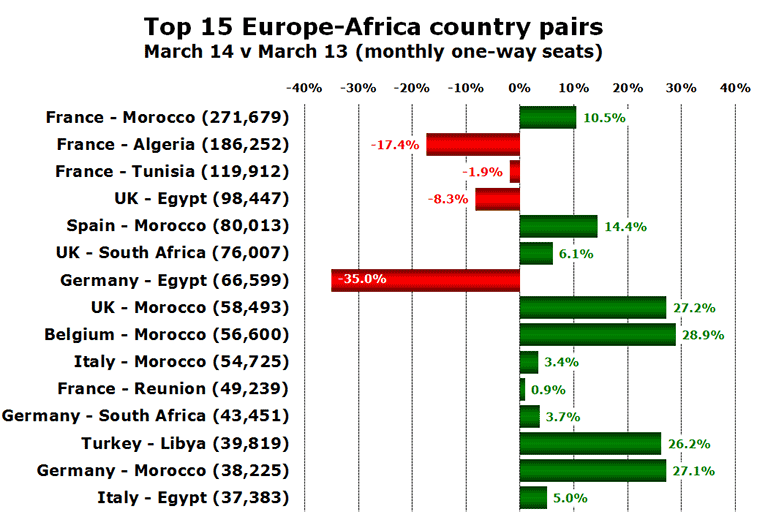 In terms of ASKs the UK-South Africa market is easily the biggest, 40% larger than even the France-Morocco market, despite being served by only three airlines (British Airways, South African Airways and Virgin Atlantic), and serving only two airport pairs (London Heathrow-Cape Town and London Heathrow-Johannesburg).

Last week saw the launch of a new weekly service operated by Vueling between Barcelona and Dakar in Senegal.As a result, Vueling is now ranked 30th among airlines serving the Europe-Africa market, and it has increased its seat capacity six-fold in the last 12 months, thanks to also starting new services from Barcelona to Algiers (1 May 2013), Casablanca (16 May 2013), Fez (19 May 2013), Oran (2 May 2013) and Tangier (16 May 2013), as well as initiating new links between Alicante and Oran (7 January 2014), and Paris Orly and Casablanca (1 June 2013).