Philippines capacity up 5.4% in 2013; Cebu Pacific Air commands half of domestic market 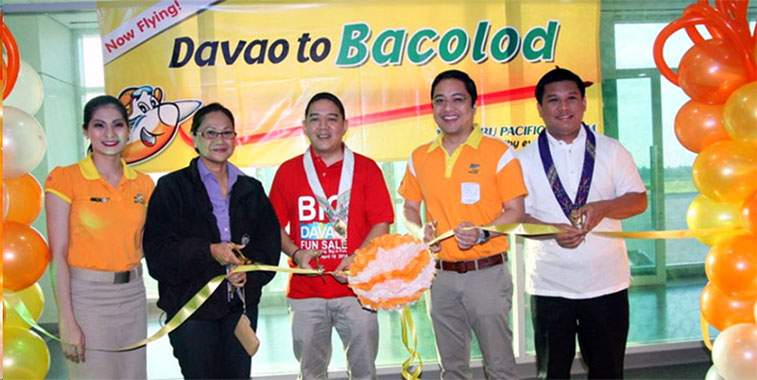 Cebu Pacific Air, the uncontested domestic market leader in the Philippines, has further expanded its domestic presence with thrice-weekly flights between Davao and Bacolod on 25 January.

Home to an estimated population of 100 million, the Philippines has experienced a dynamic economic growth in recent years, transitioning from being a country based on agriculture to one based more on services and manufacturing. According to HSBC, the country’s economy is set to become the 16th largest economy in the world, as well as the largest in Southeast Asia by 2050. Benefitting from this emerging economic climate, Philippines air traffic has continued to grow, recording an 18% increase (as measured in annual seat capacity) since anna.aero last looked at this country market two years ago.

The country’s biggest six airports are Manila, Cebu, Davao, Kalibo, Cagayan de Oro and Iloilo, which between them handled a combined 47 million passengers in 2012. According to Innovata schedule data for this February, they feature an 82% share of seat capacity and a 79% share of flights respectively, while the remainder of services are split between a total of 32 airports. Manila, also known as Ninoy Aquino International Airport, is the main international gateway to the Philippines, as it commands 54% and 49% of weekly seats and flights respectively. However, Puerto Princesa, which is PPS Publications’ airport due to having the PPS IATA code, has decreased its weekly seat capacity by 1.8% when compared to the same week last year.

Examination of Innovata annual capacity data reveals that over 41 million one-way seats were offered on flights to and from the Filipino commercial airports, representing an increase of 5.4% when compared to 2012. At 11%, domestic capacity experienced more growth than the international sector, which managed to increase by just 3.1% over 2012 figures. 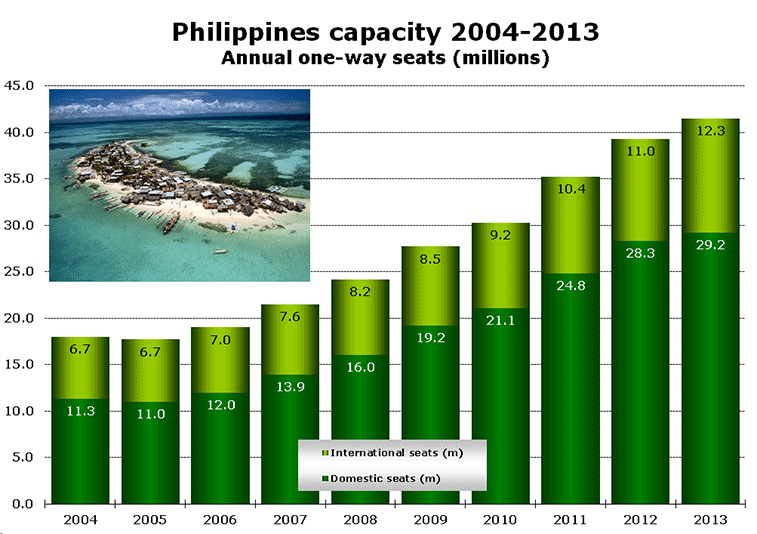 Looking at capacity data since 2004, this has increased by over 130% last year, with the domestic market outperforming the international sector, even though the latter recorded 84% growth over this timeframe. Regarding domestic air travel, this has grown by almost 160% owing to Cebu Pacific Air and Philippine Airlines, which have hugely expanded over this period, both increasing coincidentally their capacity by 340% each. Overall, the country has experienced a continuous growth since 2004, with the exception of 2005, when a modest decrease of 1.3% was noted due to the 2004 Indian Ocean earthquake that devastated the Philippines on 26 December.

The top 12 carriers serving the Filipino market command over 92% of all weekly seats and flights this February. There is no surprise in terms of the dominant player, which despite being almost three times larger than the second carrier PAL Express (formerly Airphil Express ─ the low-cost sister carrier of Philippine Airlines), has managed to grow its weekly seats by 6% when compared to the same week last year. Cebu Pacific, which operates on a total of 61 domestic airport pairs, has a 50% share of weekly seats and flights in the Filipino market, on which it directly competes with PAL Express. Furthermore, the airline serves 33 international routes from the Philippines, with Hong Kong being the most frequently served international destination with a combined 45 weekly flights from Manila, Cebu, Iloilo and Clark. 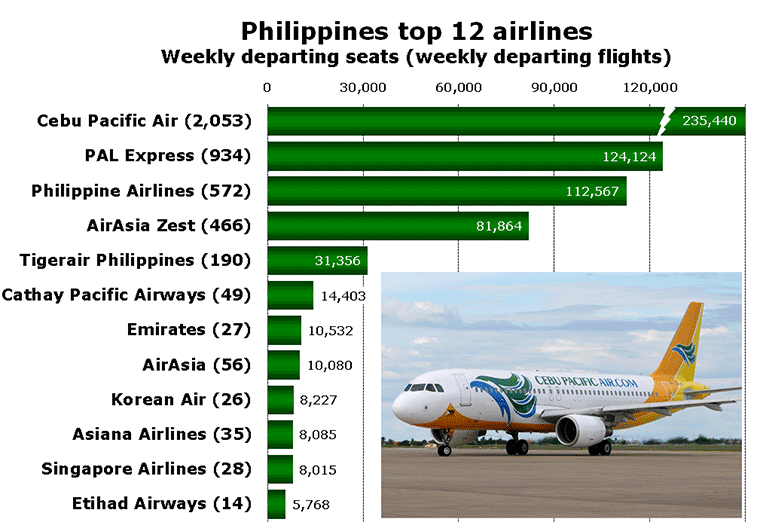 Weekly seat capacity has slightly increased by 0.2%, with half of the top dozen carriers recording growth, when comparing data from this February with the same week last year. Emirates, one of the two MEB carriers listed in this year’s ranking, has significantly strengthened its presence in the Filipino market in the last 12 months, including the addition of six weekly flights from Dubai to Clark on 1 October. On the other hand, the flag carrier Philippine Airlines has seen the greatest reduction in the past year, losing over 22,300 or 16% of its weekly seats and falling from second to third position into this year’s ranking. Most of its weekly seat capacity has been transferred to its sister company PAL Express as an answer to Cebu Pacific’s dominance on the low-cost Filipino market.

The domestic sector is the Philippines’ largest market accounting for 71% of all weekly seats, a slight decline from 73% in February last year. According to Innovata schedule data, a total of 27 countries can be reached non-stop from Filipino airports, with South Korea being the leading international market. More than 2,700 kilometres away, this country market is served by Cebu Pacific, Jeju Air, Air Busan, Korean Air, Asiana Airlines, Philippine Airlines, AirAsia Zest and Jin Air through a combined 182 weekly flights from Manila, Cebu and Clark. 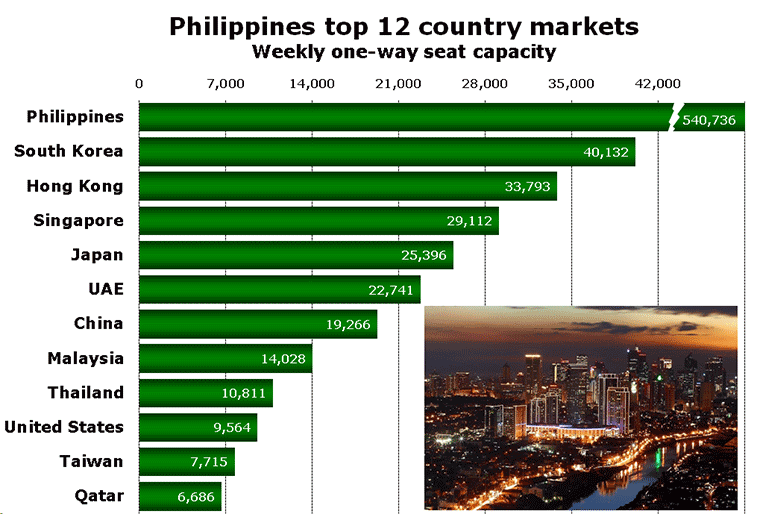 Capacity to the UAE has shown the most significant growth (68%), with PAL Express, Cebu Pacific and Philippine Airlines all having started serving this country market over the last 12 months from Manila. In the same period, services to China and Qatar have grown by 54% and 53% respectively, with the latter being a new entrant into this year’s ranking, due to Qatar Airways making Clark its second Filipino destination on 27 October and increasing its frequency on the 7,297-kilometre sector between Manila and Doha from eight times weekly to twice-daily. Taiwan has seen the greatest reduction in the past year (-26%), due predominately to the loss of AirAsia’s daily services and AirAsia Zest’s six weekly flights to Taipei Taoyuan.

Analysis of Innovata weekly seats being offered by the largest six Filipino airports this summer reveals that three of them will experience capacity decreases. In the case of Manila and Davao the decline is less than 1%, but at Iloilo, capacity is down almost 19% as PAL Express cut two routes and both Philippine Airlines and AirAsia Zest will cease their operations at the airport. On the other hand, both Kalibo and Cagayan de Oro will experience capacity growth of over 20%, with the former seeing the addition of six new services, including SilkAir’s thrice-weekly flights to Singapore on 27 May. 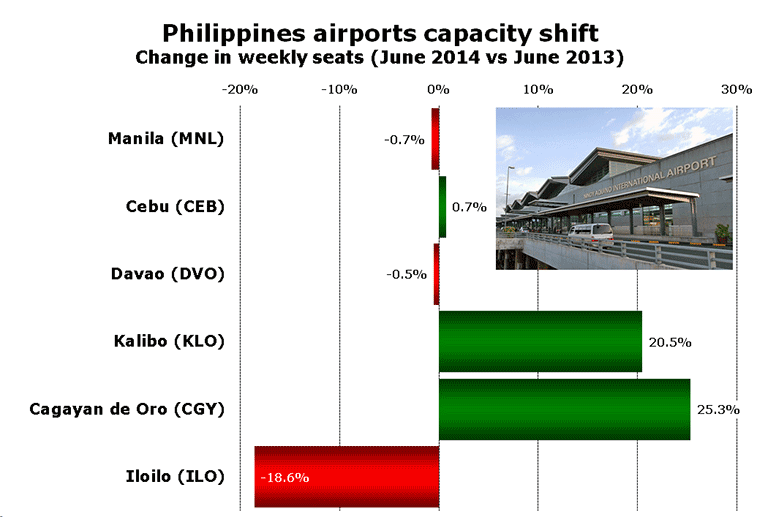 On 19 December, AirAsia Zest strengthened its presence at Cebu with the addition of thrice-weekly flights to Kota Kinabalu in Malaysia, the carrier’s seventh route from the Filipino airport.