First ever UK airport win in ‘Arch of Triumph’ competition 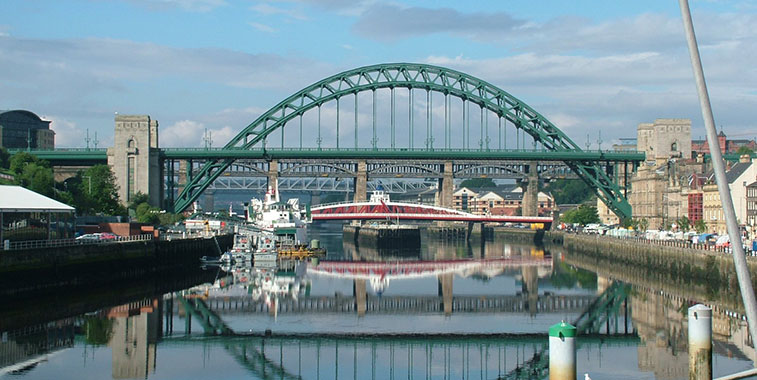 Surely having the Newcastle Tyne Bridge as their inspiration for a perfect arch, Newcastle Airport should win this competition every time it enters.

The three horse race for inter-regional supremacy continues in this global competition, as Europe draws level with Asia, following a win from the firefighters at Newcastle Airport in the UK — which was incidentally the first time a UK airport has won the coveted weekly ‘Arch of Triumph’ prize. With no entries from Asia, it was left to the two regions in joint second place to slug it out this week. But with some distinctly average FTWAs from Sharjah and Dubai Al Maktoum (both for Qatar Airways launches), despite the latter UAE airport being the current 2014 competition leader, a score of 31.5, the second highest in 2014, from the northern England airport (slightly better than the average winning score achieved so far in 2014 of 27.4) stole the win for Europe. 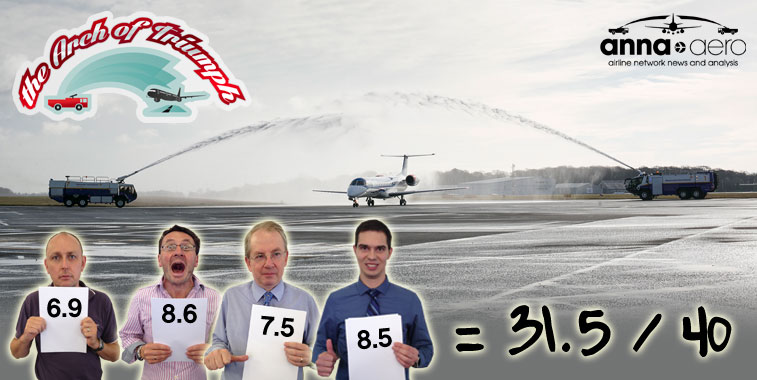 Sunny day, water on the tarmac. Is that evidence of some FTWA practice? Now to the other end of the route…

Marc: 6.9 With a fantastic sunny day on offer at Newcastle, the scene was set for a great FTWA. However, the left-hand tender is just two feet away from FTWA perfection. But as anyone will tell you…in this game, two feet can be the difference between greatness and just being ok.

Paul: 8.6 Note how the lighter fluffier arch on the right forms a ‘head’ over the darker arch on the left from which the ‘Newcastle Brown’ FTWA takes its name.  The ‘Newkie Broon’ — as it is colloquially pronounced by the Tynesider firefighters — was also the main inspiration behind a bottled ale which is phenomenally popular in both the UK and in the USA where the turnaround in economic growth was assisted by some 17 million gallons of ‘Broon’ flowing over American tonsils last year.

Ralph: 7.5 I know we’re supposed to be marking the arch, but what an interesting sky. Almost an excellent arch as well, but jet angle is just a little off on the left-hand truck.

Vlad: 8.5 Right angle, excellent scene and a really good FTWA, slightly let down by the fire crew from the left monitor that were just one second late. Definitely, the winner of this week!

Paul:  8.0 In legend Brussels’ Manneken Pis statute is based on a small boy who urinated on opposing troops who then ran away. Will, therefore, Ryanair run away from Vueling and all the tough competition building up at BRU if given the same treatment? It’s hard to imagine, but it would be fun to try, not to mention enormously comforting.

Ralph: 5.3 It looks like the airport’s fire tender operatives were caught a little off guard by the arrival of this Ryanair flight, a bit like the airport when Ryanair announced it planned to start a base here last year.

The fire crews at Sharjah get up close and personal with the Qatar Airways aircraft.

Marc: 6.7 Normally I am critical of when fire crews station themselves miles away from the inaugural aircraft (due probably to the old ‘health and safety’ regime), so its nice to see some crews here at Sharjah getting up close to the Qatar Airways aircraft in this shot. The impact however is lost with a bit of Tobleroning creeping in.

Paul: 3.9 In about 1985 I was treated to a special, personal display by the Sharjah fire department after which the fire chief drove me back to my hotel in his Rapid Intervention Vehicle as no aircraft were due in for the rest of the day. It’s a bit busier now! Still, no excuse for this funny shape: Toblerone is wheel chock-shaped chocolate, sold by the kilo in duty free shop. It is not a Fire Truck Water “Arch.” Aghhhhhhh!!!!!

Ralph: 7.0 Ok, so it’s a bit pointy, but at least it joins in the middle, you can see the aircraft clearly as well as both fire trucks.

Vlad: 5.5 Another example of the most common error made by airport fire crews around the world — ‘Tobleroning’. Since the second millennium BC in Mesopotamia, arches have been defined as curved symmetrical structures spanning an opening, which is clearly not in Sharjah’s case. A poor FTWA can’t get more than an average score.

Marc: 4.8 I think this is a classic case of one airport fire crew watch trying to outdo another one here at Dubai Al Maktoum. The airport is the current leader in the 2014 competition and maybe they thought they could seal victory with this four tender FTWA. The result is an aircraft wash only.

Paul: 5.5 I’ve just worked out that if DWC carries on using up desalinated water at this rate, the sea will empty out and you’ll be able to walk to Qatar by the middle of next month, just in time for the opening of the Gulf Water Conference focusing on the challenges the GCC countries will experience in water usage in the coming decades.  Now just how ironic is that?

Ralph: 4.0 This is quite artistic, with the nose of the aircraft appearing through the mist, but there really is too much water, not even redeemed by a rainbow.

Vlad: 5.5 anna.aero doesn’t award the “Arch of Triumph” certificate for quantity but quality, which our friends from DWC should already know as they managed to secure this prize several times in the last months. 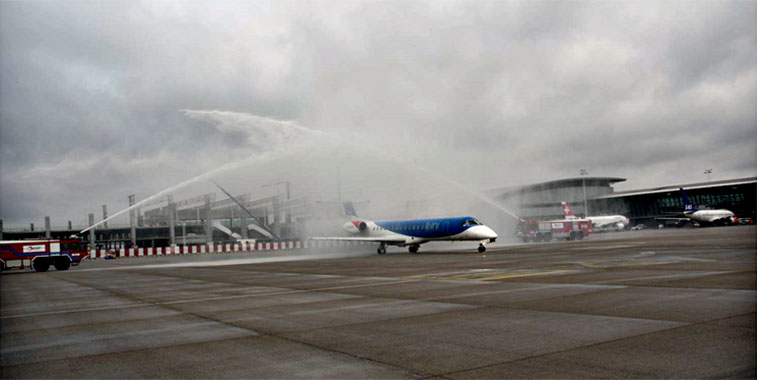 …over in Brussels. Clearly there was some FTWA practice over the weekend at Brussels Airport, as this effort was better than that given to Ryanair – unless of course it was a low-cost FTWA?

Marc: 6.8 After a classic ‘Big Boy, Little Boy’ was delivered in homage to the Manneken Pis statue in downtown Brussels for the Ryanair base launch last Thursday, Monday’s fire crew at the airport seem to grasped the idea a little better for the bmi regional launch. Nice view of the new ‘Connector’ being built too.

Paul: 7.2 This FTWA has nothing to do with the ridiculously clichéd comments about Manneken Pis. In fact the two monitors are being deliberately directed at each other to cause interference so that an ornate white mist descends over the bmi regional Embraer. The effect is known by crash fire rescue experts as ‘Brussels Lace’ and was the major inspiration behind the intricate bobbin lace needlework style of the same name. Brussels Lace is not to be confused with ‘Brussels Point’, a type of needle lace which obviously has nothing to do with FTWAs.

Ralph: 6.3 All a bit too grey for my liking. At least the arch is connected, and we get to see SAS and SWISS aircraft in the background.

Vlad: 6.5 I was a bit surprised that we had no “Gangnam Style” this week, and then I saw this FTWA. I have to admit that after their “Big Boy, Little Boy” welcoming Ryanair, Brussels Airport’s fire crew managed to slightly improve their performance with this dance-inspired effort. 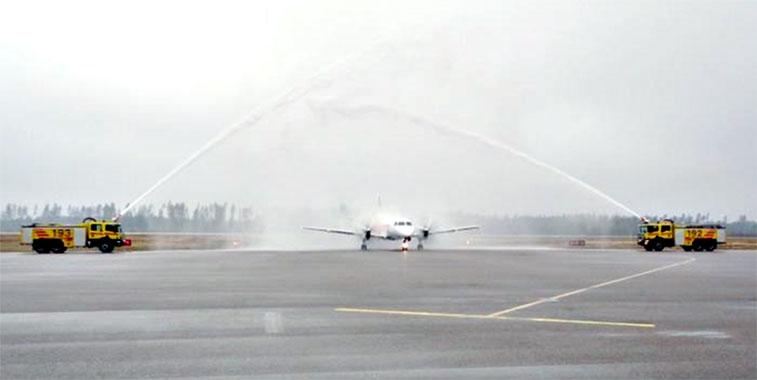 Did those grey skies on 3 March stretch from Belgium to Sweden?

Marc: 6.3 If you took the Brussels FTWA for the Ryanair launch and the Newcastle FTWA for the bmi regional launch as your outer markers, this FTWA would nestle between the two. Hence it gets a score bang in the middle of the two as well.

Paul: 8.3 This is an enormously clever FTWA called a “Kongshaugen” from the Old Norse meaning “Kings Mound” which has been recreated here by Swedes for their Nordic cousins, er, next-door. No Norwegian schoolboy would not recognise and applaud this. Skål!

Ralph: 6.5 Not bad. I like the fact the fire trucks are sequentially numbered, and we don’t get too many FTWAs for turboprop aircraft.

Vlad: 6.0 To be honest, I can’t decide myself if this is a ‘Tobleroning’ or a ‘Gangnam Style’ considering the top of the arch is slightly visible. What I know for sure is that NextJet’s Saab 340 had a full wash after this.