Having a population of 250,000, the city of Orlando is served by both Orlando International and Orlando Sanford airports, with the former being the main gateway to the popular tourist destination located in central Florida. Orlando is currently ranked as the state’s second busiest airport, behind Miami, and serves as a focus city for both Southwest Airlines and JetBlue Airways, and as a base for AirTran Airways. 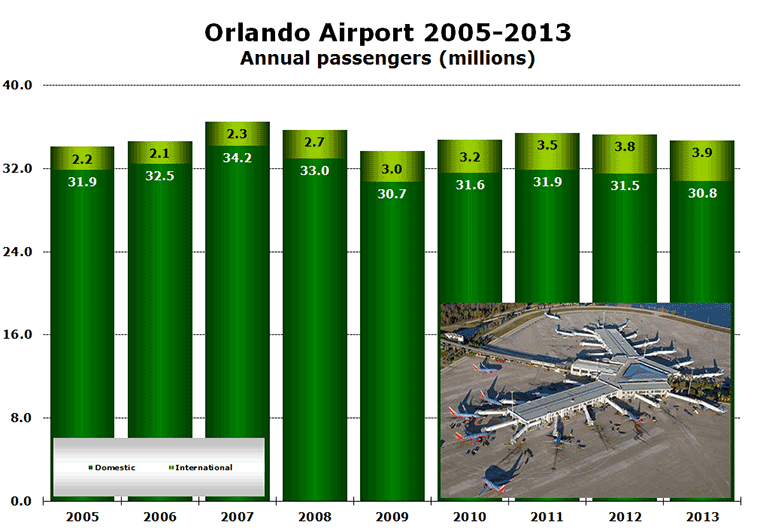 Examination of data facilitated by the US airport indicates that while the traffic trend was fairly uneven between 2005 and 2013 peaking in 2007 at 36.5 million passengers, international traffic managed to grow each year with the exception of 2006, when a slight decrease of 4.5% was noted. Over 34.1 million passengers used Orlando nine years ago, a number that increased by 1.8% last year, reaching 34.7 million. Furthermore, according to 2013 traffic data, the airport recorded a modest decrease of 1.7% in traffic when compared to 2012. Even though the traffic declined last year, the airport did not have a bad year when compared to 2012, as the international sector noted a new high record, increasing by 4.2% to almost four million travellers.

While a total of 29 carriers operate from Orlando, the top 12 airlines command almost 93% of weekly seats and flights this March. Southwest is still the #1 operator in 2014 as it controls 27% of weekly seats (5% more than in March 2013). In addition, the world’s largest LCC is not only the dominant carrier at Orlando, but also the fastest growing one, with an annual growth in weekly seats of 20%, as a result of transferring capacity from its subsidiary, AirTran. In 2011, Southwest acquired AirTran to expand its presence at many of the carrier’s hubs, including Orlando. As a consequence, AirTran has experienced the greatest reduction in the past year, losing almost 26,000 or 61% of its weekly seats. However, AirTran will operate as a separate carrier until 2015, when its network along with its 737-700 fleet will be fully integrated into Southwest’s brand and livery. 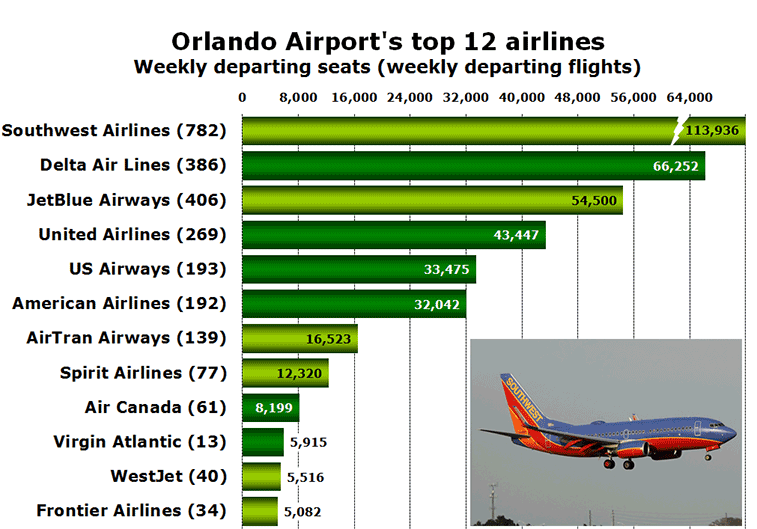 Even though weekly seat capacity has slightly decreased by 1.3%, eight out of the top dozen carriers recorded growth when comparing data from this March with the same week last year. With the exception of Southwest and AirTran, LCC Spirit Airlines experienced the largest growth (14%) in weekly seats, while on the other hand, Frontier Airlines that turned 20 this February, reduced its capacity by 25%. Interestingly, half of the top 12 airlines are LCCs (and are highlighted in the graph above), with Allegiant Air being the most notable absentee at Orlando since 2011.

No international destination has made it into this year’s ranking, with the top 12 involving only US domestic services and representing 41% of all weekly seats. The world’s busiest airport with 94 million passengers last year, Atlanta is the dominant destination from Orlando even though weekly seat capacity on the 649-kilometre sector has been reduced by 4.2% when compared to last year’s figures. As of March 2014, this airport pair is served by three carriers, namely Delta Air Lines, Southwest and AirTran with a combined 24 daily flights. 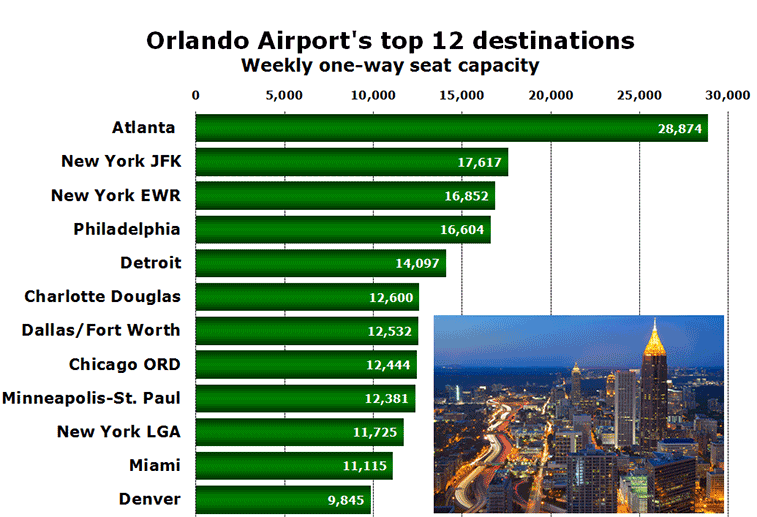 Besides Atlanta, no other destination within the top 12 ranking experienced capacity decline. The fastest growing airport pair is the 1,584-kilometre sector to Dallas/Fort Worth, which saw an 11% increase in seats year-on-year, courtesy of American Airlines increasing its frequency by one daily flight to 75 times weekly.