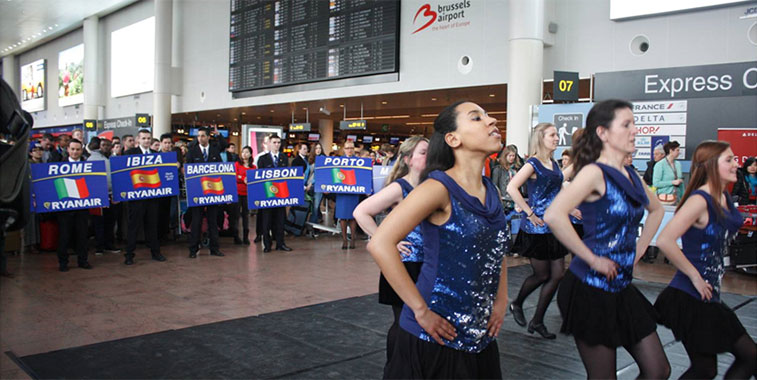 As part of Ryanair’s network re-invention at Brussels Airport, the ULCC expanded its presence in Portugal with the addition of daily flights to Porto and twice-daily services to Lisbon on 27 February.

Covering an area of 92,000 square kilometres, Portugal is one of the six Latin countries of Europe (the others being Spain, France, Italy, Romania and Moldavia), having an estimated population of 10.5 million. Located in south-western Europe, in the Iberian Peninsula, Portugal is a developed country with an advanced economy, being a member of the European Union since 1986.

According to the World Tourism Organisation, the country is among the top 20 visited in the world, with 7.7 million visitors last year. Thus, tourism makes a major contribution to its economy, adding 10% to the GDP. The air transport industry plays an important role in supporting Portuguese tourism, as over 51% of international tourists travel by air, according to IATA. The country’s largest international gateways (in terms of annual seat capacity), managed by the national airport authority group ANA (Aeroportos de Portugal), are Lisbon, Porto, Faro and Funchal airports, which increased their combined annual seat capacity by 6.6% since anna.aero last looked at this country market three years ago.

All four airports grew in 2013

Analysis of Innovata annual capacity reveals that almost 20 million one-way seats were offered on services involving Portuguese airports in 2013, 4.7% more than in the previous year. In fact, all four main airports managed to experience capacity increases when compared to 2012 figures, with Faro recording the largest growth (8.9%), followed by Funchal (7.1%), Lisbon (4.1%) and Porto (3.6%). 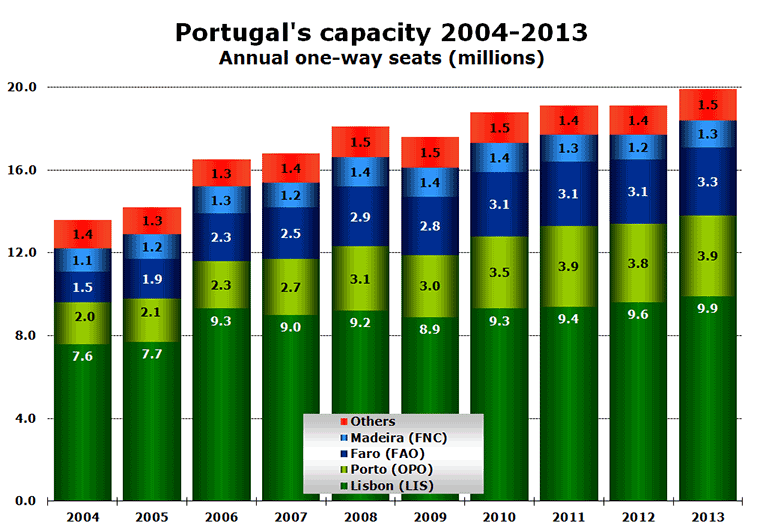 Overall, looking at seats data since 2004, Portuguese air travel noted over 42% growth by 2013. In fact, the annual seat capacity was up every year, with the exception of 2009, when a modest decrease of 2.7% was noted due to European economy shrinking. Both Porto and Faro have more than doubled their capacities over this period, while Lisbon and Funchal experienced 31% and 15% increases respectively, when compared to the same period 10 years earlier.

Looking at this year’s ranking, there is no surprise that the flag carrier, TAP Portugal, is still by far the dominant player in this country market, as it commands 47% and 49% of weekly seats and flights respectively. This March, the airline operates on a total of 92 routes, of which 84 are international services. Paris Orly is TAP’s most frequently served international destination, with a combined 10 daily flights from both Lisbon and Porto. Furthermore, the Star Alliance member was recently classified by anna.aero as the biggest carrier for the European World Cup fans heading for Brazil, serving no less than 11 Brazilian cities non-stop from Lisbon this summer. As part of its network expansion for S14, TAP will inaugurate 10 new services from the capital city, including two new Brazilian destinations, Belem and Manaus on 3 June. 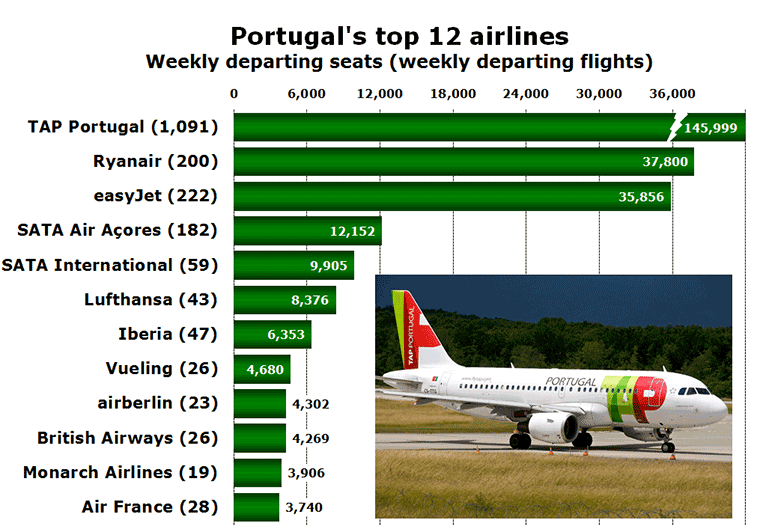 As of March 2014, weekly seat capacity went up 7.9% with eight out of the top 12 airlines growing when compared with the same week last year. Vueling is not only a new entrant into this year’s ranking but also the fastest growing airline, increasing its weekly seat capacity by 44% over the last 12 months. Besides the fact that the Spanish low-cost carrier has added two further weekly frequencies on the 996-kilometre between Lisbon and Barcelona up to 13 times weekly, it also launched daily services from Porto to Orly on 27 April. On the other hand, SATA International, the Azores-based carrier, experienced the greatest capacity decrease (-12%), due dropping two airport pairs, namely Madeira-Stockholm Arlanda and Madeira-Dublin.

The top 12 international destinations account for almost 48% of all weekly seats, which is up 2% from 2013 figures. At almost 18,000 weekly seats and 4% more than in March 2013, Madrid is still the busiest destination from Portugal, closely followed by Orly, which recorded a modest increase of 2% when comparing data from 4-10 March with the same week last year. A combined 154 weekly flights are offered by five airlines (Ryanair, Iberia, TAP, easyJet and Air Europa) to the Spanish capital from Porto and Lisbon. 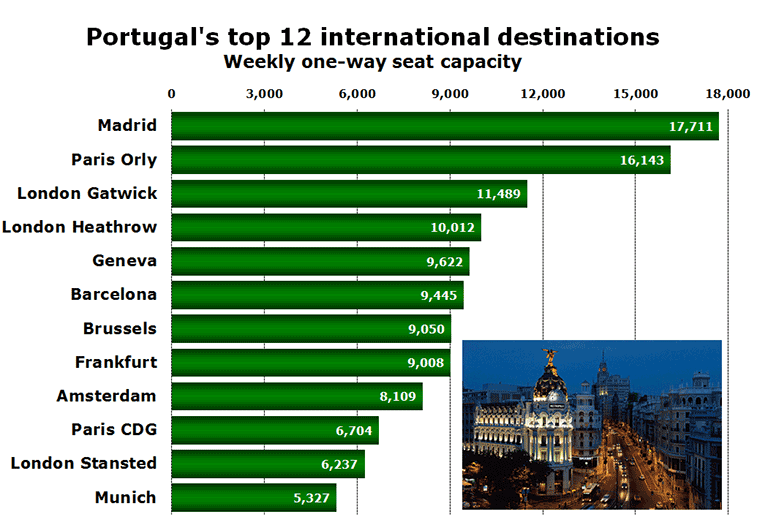 In fact 11 of the top dozen destinations being served from Portugal experienced growth when compared to last year’s data. Seat capacity to London Stansted has increased by 106% over the last 12 months from Portugal, with Ryanair inaugurating twice-daily flights on the 1,627-kilometre sector from Lisbon on 26 November. Besides this, services to Brussels have almost doubled, due to Ryanair launching daily services from Porto as well as twice-daily operations from Lisbon on 27 February. Amsterdam is the only top 12 destination which noted a decline in weekly seats (-6%), courtesy of transavia.com withdrawing its four weekly flights to Porto. On 4 February, Germania launched its first scheduled operation to the mid-Atlantic territory of Madeira, with the addition of weekly flights from Erfurt to Funchal.