British Airways growing capacity in North America and Asia; new route to Austin is 19th non-stop service to US On 3 March, British Airways has further expanded its presence in the US market with a new service from London Heathrow to Austin, served five times weekly using 787-8s. As a result, the airline’s US routes now account for over 35% of its ASKs from Heathrow.

British Airways may not have been among the first of the world’s airlines to start operating either the Airbus A380 or the Boeing 787, but last September it did claim the distinction of being only the second airline in the world (after China Southern Airlines) to be operating both of these next generation aircraft types. While the future of London’s airport capacity continues to be debated and analysed, British Airways is making the most of being the dominant carrier at Europe’s busiest airport, London Heathrow. Having abandoned some years ago the notion of providing international services from UK regional airports (with the odd exception), British Airways is now firmly focused on London. Apart from its Heathrow operations (based primarily but not exclusively at Terminal 5), it also has a sizable presence at London Gatwick (where it is the second biggest carrier after easyJet), and also has a subsidiary, BA CityFlyer (IATA code CJ), operating from London City.

US accounts for over one-third of ASKs

Not surprisingly British Airways has an extensive network of non-stop routes to the US, which increased from 18 to 19 last week with the launch of services to Austin in Texas. Analysis of the airline’s capacity from London Heathrow using Available Seat Kilometres (ASKs), which takes into account sector length, and is therefore a better indicator of revenue, reveals that the airline’s US routes account for over 35% of its ASKs from the airport. No other country accounts for more than 6%, highlighting why the airline’s financial fortunes have been closely correlated with its transatlantic traffic. 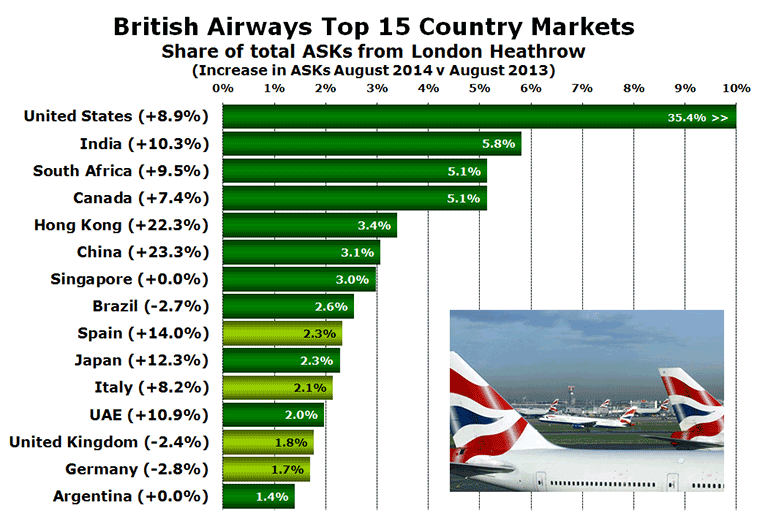 Long-haul markets dominate, with Spain being the leading European country market this summer, ranked ninth. The UK ranks a lowly 13th, with British Airways having direct links to just seven regional airports in the UK (Aberdeen, Belfast City, Edinburgh, Glasgow, Leeds Bradford, Manchester and Newcastle). The fastest-growing of these country markets are China and Hong Kong, which will both experience ASK growth of over 20% this summer. In the case of China, British Airways’ growth in this market can be attributed to the launch last September of a new route to Chengdu.

New routes to Greece and Portugal this summer

Apart from the recently launched route to Austin, British Airways will be expanding its Heathrow network this summer to 129 non-stop destinations (up from 125 last summer) with the addition of low-frequency services to Faro, Malaga and Porto (all from the end of March), and Mykonos and Santorini (both in May). Destinations no longer served non-stop this summer which were served last summer are Agadir (ends 29 March 2014, but resuming in winter 2014), Alicante (ends 29 March) and Lusaka in Zambia (ended 25 October 2013).

Apart from the new Heathrow routes, the airline is also launching new daily flights from Gatwick to Malta from the end of March, and thrice-weekly flights between Edinburgh and Ibiza from 23 May until 7 September.

Hollywood served with double-daily A380 flights

According to schedule data, British Airways has allocated its newest aircraft types to the following routes this summer. The A380s are currently only assigned to three routes (one each in Africa, Asia and the US), while the 787s will be plying their trade on seven routes this summer, including three in the US and two in Canada.