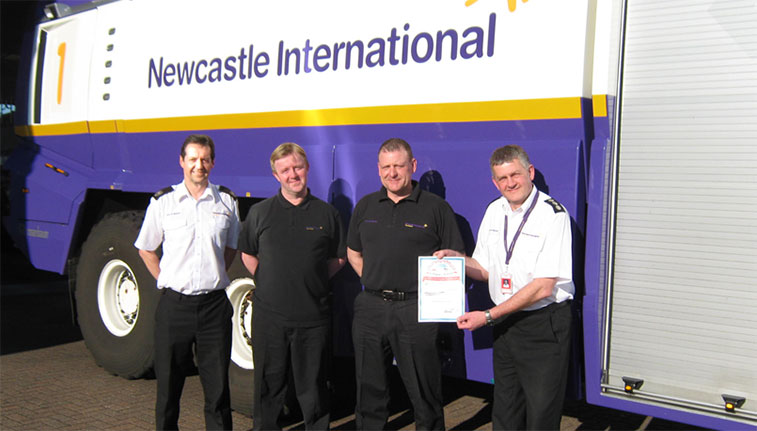 Proudly showing off the first-ever UK win in the ‘Arch of Triumph’ competition are the Newcastle Airport’s firefighters (left to right): Steve Armstrong, Dave Smith, Steve Cockburn and Steve Murray.

Following back-to-back wins, Europe has stormed to the top of the inter-regional FTWA competition as a result of Rotterdam Airport’s win this week, with Asia slipping back into second. The Dutch airport’s score of 29.4 is above the average score of 27.9 recorded so far during the 2014 competition, however it only secures #4 spot on the leader board. Rotterdam’s score is also below the European winning average, which stands at 30.1, registered across the region’s previous three wins. The airport will also have some bragging rights over its bigger Dutch cousin — Amsterdam — which only managed fourth place (out of five entries) in the week that it entered last September, in the first ever ‘Arch of Triumph’. 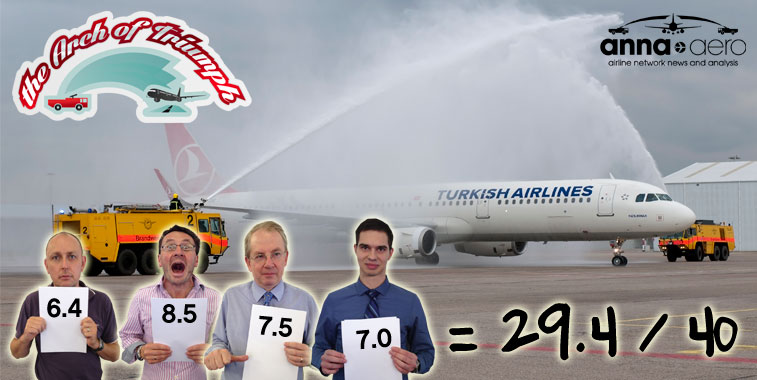 Marc: 6.4 Looks like the wind came into play here a little bit here in Rotterdam, blowing in off the North Sea no doubt, and there is a smidge of ‘Roman Cross’ going on, but this is not a bad effort from the Dutch fire crews. Notice that the airline put on a nice bit of new kit (Sharklet A321) on the inaugural flight, presumably because the boss was on board.

Paul: 8.5 Ironically, there is a FTWA style called a ‘Rotterdam’ in which it is impossible to tell where the photo has been taken. This was the inspiration behind The Beautiful South’s 1996 hit lyric: “This could be Rotterdam or anywhere, Liverpool or Rome…” But this FTWA isn’t a ‘Rotterdam’, it’s a ‘Gangnam Style’ arch and, indeed, as far as I’m concerned Rotterdam Rocks!

Ralph: 7.5 A little bit ‘pointy’ but overall not a bad effort. Curious to see that fire trucks ‘2’ and ‘3’ appear to be in attendance. What happened to fire truck ‘1’?

Vlad: 7.0 A decent FTWA by Rotterdam’s fire brigade slightly let down by not taking into consideration the wind interference from the North Sea. Points have also been deducted for the photographer’s poor position. 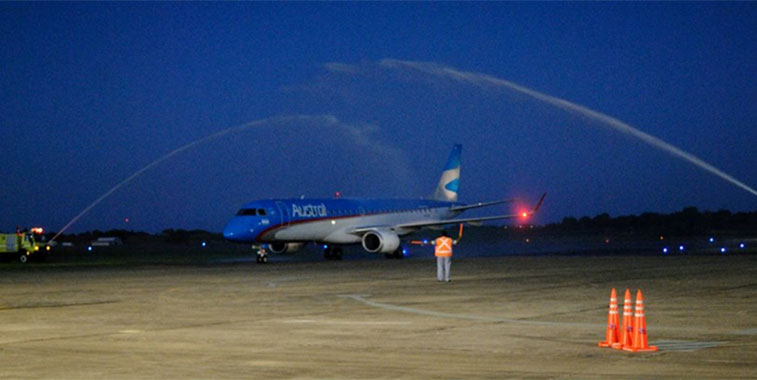 Marc: 5.7 A bit like the two airports that the new route was being flown on…one big airport and one little airport…they decided to create a ‘Big Boy, Little Boy’ FTWA to match at the little end — Parana, which is just over 350 kilometres north-east of the capital.

Paul: 4.9 Gangnam Style was soooo 2013. This isn’t it. This FTWA technique is called ‘Neknominate’ and centres on finding anything you can find to pour over an arriving aircraft. It has also sparked an online drinking game of the same name, much to the revulsion of stuffy, middle aged parents like myself.

Ralph: 6.2 Challenging lighting conditions and the exotic location make this our most interesting FTWA this week, but sadly not the best. Non-matching fire trucks and a definite case of ‘Gangnam Style’.

Vlad: 6.8 A hint of ‘Gangnam Style’ in Parana, which is fine considering that the small Argentinian airport organised a special fanfare on the airfield to welcome Aerolineas Argentinas’ first passengers from Buenos Aires Aeroparque. 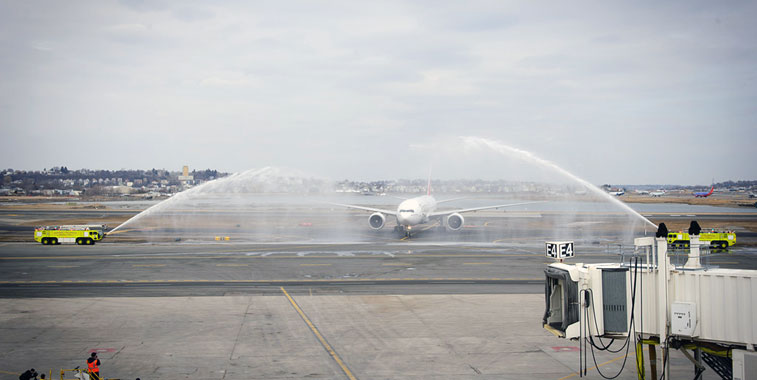 If this is how they do FTWAs in Boston, I’d hate to go to one of their tea parties.

Marc: 5.3 We’ve not seen one of these arches for a while, the ‘Dukes of Hazard’, as it is known in FTWA circles and particularly popular in the southern US. This is a text book example with the gap in the bridge/arch clearly visible…ready for the General Lee to leap over to safety and thus avoid capture by Rosco P. Coltrane and Cletus Hogg. Fun to see, but they do not score highly.

Paul: 5.9 This style of FTWA was devised by the Boston firefighters to resemble two overflowing glasses of Sam Adams beer being crashed together to a resounding “Cheers!” It also inspired a 1980s sitcom of the same name. I used to go out later on a Friday night, just so I wouldn’t miss an episode. But when I recently watched the re-runs on cable I didn’t find it that funny anymore. And has anyone seen Woody Harrelson in “True Detective”? What the hell is that all about???

Ralph: 5.5 Massport kindly provided over 30 water arch images to choose from, but none of them showed a great continuous arch. Still, there were lots of excited onlookers to welcome Emirates’ arrival in Boston, and the four-axle fire trucks are certainly impressive.

Vlad: 6.0 Playing Flappy Bird (the most downloaded free game in the iOS app. store) on your iPhone while waiting for an aircraft to be welcomed with the traditional water arch salute will result in poor coordination and therefore, a “Big Boy, Little Boy” FTWA.