Air Algérie is third largest airline in North Africa; Over 75% of capacity split between domestic and French markets 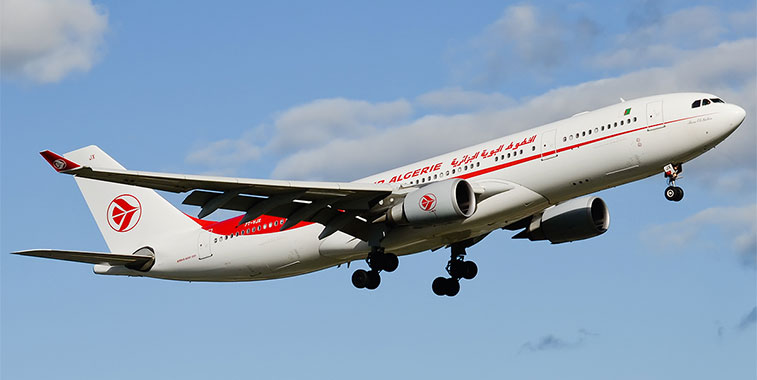 One of Air Algérie’s six A330-200s, which ply their trade to destinations like Paris (Orly and CDG), Dubai, Beijing, and seen here in Montreal. The Algiers-Paris Orly route is the North African carrier’s biggest route in terms of weekly seats.

The third largest airline in North Africa (in terms of weekly seats and according to Innovata schedule data), after EGYPTAIR and Royal Air Maroc, Air Algérie’s main base is Algiers, with nearly 40% of its weekly seats originating in the capital and largest city in Algeria. While its #3 position is unlikely to be under any serious threat from #4 airline Tunisair, which offers nearly 19,000 less weekly seats, Air Algérie has itself trimmed over 19,000 weekly seats (-15%) from its schedule this March, when compared to 18-24 March 2013.

The Algerian flag carrier still dominates its home market, controlling nearly 55% of all seats, with #2 carrier Saudi Arabian Airlines and #3 Aigle Azur offering less than half of that share even when their weekly seats are combined. Air Algérie’s position would seem secure from any imminent low-cost threat too, as Vueling is currently the only LCC serving Algeria, with less than 1% of weekly seats.

With nearly 76% of all weekly seats split (approximately two thirds to one-third) between Air Algérie’s domestic services and France, these two country markets dwarf the #3 market of Spain. However the importance of the top two markets has waned over the last 12 months, as they were responsible for nearly 80% of seats in March 2013. Indeed, both markets have been visited by the network planner’s axe in the past year, with domestic sectors being trimmed by nearly 6,000 weekly seats, while France has seen nearly 7,000 weekly seats culled. In the same period, the airline’s capacity commitment to Spain has gone pretty much unchanged with some marginal growth. 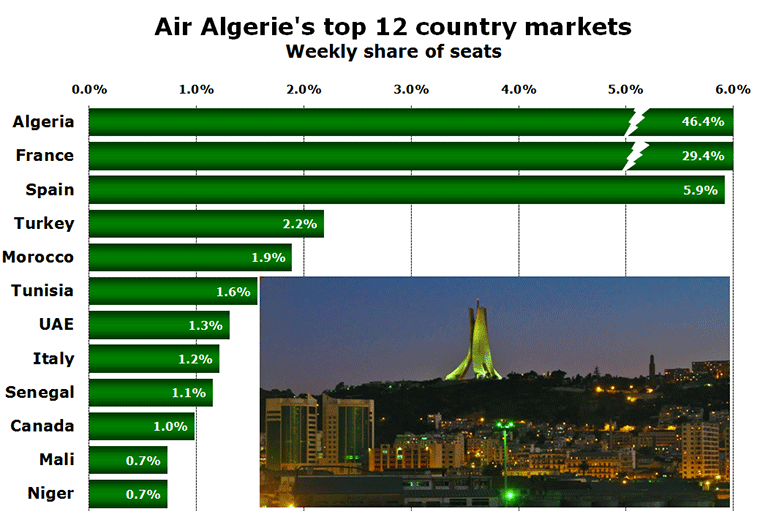 New entrants to the airline’s top 12 routes since last March are Mali and Niger, with Turkey and Morocco improving their positions to the detriment of troubled Tunisia, while Senegal has jumped to ninth from the twelfth position it achieved a year ago. The top 12 country markets command over 93% of all Air Algérie’s, indicating its reliance on a narrow network, but this position has improved slightly since last March, as this figure has decreased from nearly 95%.

The capacity cull is being felt across the airline’s network, with four out the top five city airport pairs being trimmed over the last 12 months, with 1,780 weekly seats being lost from the #1 route. Despite this reduction in seats, such is the importance of Paris Orly to Air Algérie, that the Parisian hub is still the fourth largest airport in the airline’s portfolio in terms of total weekly seats. Three of the four (the exception being Algiers-Oran) domestic routes (in light green) in the top 12 have witnessed extra capacity year-on-year, with just one international service, Algiers to Casablanca, receiving extra seats since last March. 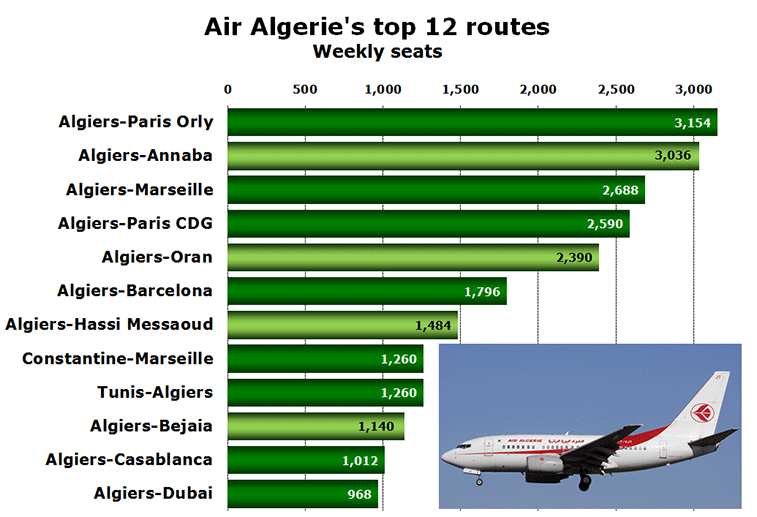 Over the course of S14, Air Algérie is expected to start-up five new routes, according to anna.aero’s New Route Database. Of these, three have been served before, namely the routes to Vienna (last served in November 1987), Lisbon (May 1994) and Paris CDG (September 2006), while one is seasonal, Valencia, which will be served until 20 September.