Opened in March 1927 as John Rodgers Airport, Honolulu Airport is the main international gateway to Hawaii and the city of Honolulu, having an estimated population of almost 400,000 people. The airport is located on the most recent addition to the 50 US states (joined the Union in August 1959), on the third largest of the Hawaiian Islands ― O’ahu. Classified as one of the busiest airports in the US, Honolulu serves as an operating base for Hawaiian Airlines, including its newest inter-island subsidiary ― ‘Ohana by Hawaiian ― that launched its first operations with the addition of thrice-daily flights to Molokai during the course of last week. 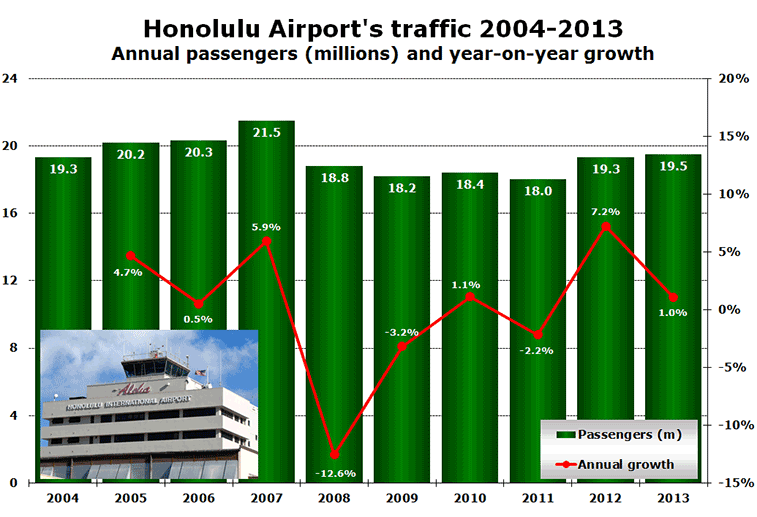 Analysis of data facilitated by the Government of Hawaii indicates that while the traffic trend was fairly uneven between 2004 and 2010 peaking in 2007 at 21.5 million passengers, Honolulu has consolidated its annual passenger performance after 2011, reaching 19.5 million last year. The collapse of Aloha Airlines ― headquartered in Honolulu ― in 2008 had a major impact on traffic flows to and from the airport, resulting in a double-digit decrease of approximately 13% that year. The traffic continued to decrease until 2011 when the airport handled a total of 18 million passengers, the lowest recorded since 1985. However, looking back to 2004, the state’s main airport noted a modest increase of just 1% in 2013.

Hawaiian dominates with 46% of seats and flights

The top 12 airlines serving Honolulu account for over 93% of all weekly seats this March, while a total of 24 carriers operate from the airport. There is no surprise that Hawaiian is the biggest operator as it controls 46% of weekly seats and flights, being almost four times larger than the second carrier, United Airlines. The airline, which handled 9.94 million scheduled passengers in 2013 (+4.8%) at a load factor of 81.5% (down from 83.2% in 2012), operates on a total of 27 routes from Honolulu this March, of which six are inter-island services to Hilo, Kona, Lihue, Lanai, Kahului and Molokai, with the latter being launched last week by ‘Ohana by Hawaiian. On these inter-island routes, Hawaiian has an 81% share of seat capacity and 60% share of flights. Furthermore, Los Angeles is the airline’s most frequently flown destination outside Hawaii, being operated thrice-daily from Honolulu. 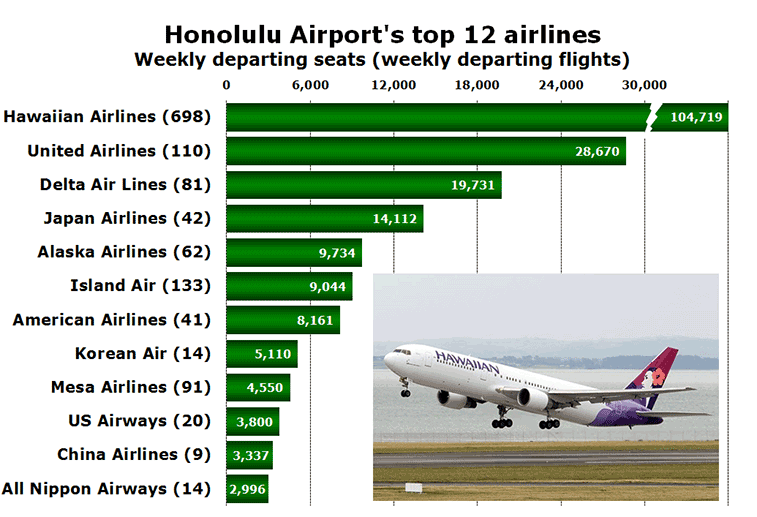 Weekly seat capacity at Honolulu has increased slightly by 3%, with eight out of the top dozen airlines noting growth, when comparing data from this March with the same week last year. Ranking sixth, Island Air ― an US commuter airline based in Honolulu ― is the fastest growing carrier with an annual increase in weekly seats of 76%, coming as a result of boosting its Lihue services from thrice-daily to six times daily, as well as its Lanai operations from twice-daily to five times daily over the last 12 months.

On the other hand, Mesa Airlines, the Phoenix-based regional carrier branded as go! to the Hawaiian Islands, posted the most dramatic decrease (-42%) of the top 12 airlines. The airline announced that it will cease its Hawaiian operations from 1 April due to significant growth in the airline’s flight operations in Mainland US. In addition, one new entrant has made it into this year’s ranking, namely China Airlines that resumed services on the 8,200-kilometre sector from its Taipei Taoyuan base with twice-weekly flights on 2 June, after it was last served in 2010. On 21 January, Air China launched its first route to Hawaii, with the addition of thrice-weekly services on the 8,145-kilometre sector from Beijing, becoming the second carrier after China Eastern Airlines to serve the Hawaiian market non-stop from China.