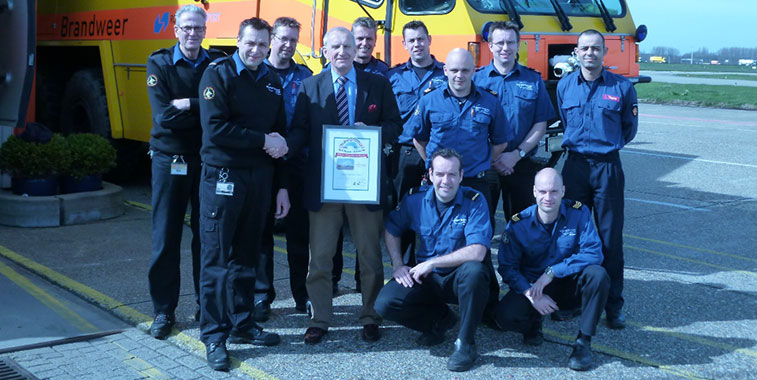 Although the airport has an FTWA named after them — ‘The Rotterdam’ — where it is impossible to tell which airport the ‘Arch of Triumph’ photo has been taken, Rotterdam The Hague Airport did not fall into this trap when securing their win last week. The certificate was presented to the fire crew by Roland Wondolleck, the airport’s MD.

Finally, last year’s winner of the regional ‘Arch of Triumph’, North America, has secured its first victory of the 2014 competition, courtesy of Palenque Airport in Mexico, which organised an FTWA for the arrival of the Interjet service from Mexico City, the first ever commercial service at the airport. Being the only FTWA this week, it was perhaps a hollow victory for the new airport and the region, but as they say in football – a win is a win, whatever the score. However, the lowly victory result of just 23.0, has reduced the average winning score for 2014 from 27.9 to 27.3, and while Palenque sits in the top 10 airports for now, it probably will not feature come the end of the year. This angle of FTWA has been a major influence on Palenque architecture.

Marc: 4.6 The fire crew in the visible tender must be livid. They have done what they needed to do…but have been let down by their colleagues. They deserve some sort of medal for their dedication to airport marketing. The rest deserve a short walk down a long alleyway in a Tijuana back street.

Paul: 9.8 The angle of this FTWA is called ‘Palenque Mayan’ and was devised years ahead of its time in 250 BC before air transport was even a concept, let alone low cost carriers. It went on to inspire the architecture of the Mayan city that went into decline in the 7th Century, probably because of the lack of an airport. The new Palenque International Airport (PQM) and Interjet’s arrival will now fix all those things and Palenque will flourish again. Súper!!!!!

Ralph: 5.1 You can find a video version of this on YouTube that proves there was a second fire truck present, and that it was a fairly windy day. Following Dubai World Central’s FTWA win when they opened, this becomes the second “new” airport to win the “Arch of Triumph” with their first flight.

Vlad: 3.5 There’s a lot of activity going on around this welcoming ceremony which is let down by the amateur photographer who didn’t position properly to include both tenders. A lonely squirt will never win anna.aero’s prestigious ‘Arch of Triumph’, with the exception of damaging the aircraft during the water arch salute.