Thai AirAsia, the second largest carrier in Thailand, in terms of weekly seats, inaugurated on 21 February its first Chinese route from outside Bangkok, with the addition of daily flights from Chiang Mai to Hangzhou.

Home to an estimated population of 67 million, Thailand is the second largest economy in Southeast Asia (after Indonesia). It is a newly industrialised country and is becoming a major exporter. In addition, tourism contributes significantly to the Thai economy, with most of the visitors arriving by air. According to Innovata schedule data for this March, Thailand currently has 33 commercial airports providing scheduled airline services, of which 22 cater for domestic flights only. The country’s biggest international airports (in terms of annual traffic) are Bangkok Suvarnabhumi, Bangkok Don Mueang, Chiang Mai, Hat Yai, Phuket and Chiang Rai. These six airports have increased their combined annual passengers by 64% since anna.aero last looked at this country market four years ago.

Analysis of data facilitated by Airports of Thailand (AOT) reveals that the largest six Thai gateways handled together over 88 million passengers in 2013, 16% more than in the previous year. Except Suvarnabhumi, which noted a modest decrease of 3.1%, all airports experienced growth when compared to 2012 data, including an impressive increase of over 175% for Don Mueang, due to becoming increasingly attractive to low-cost carriers. 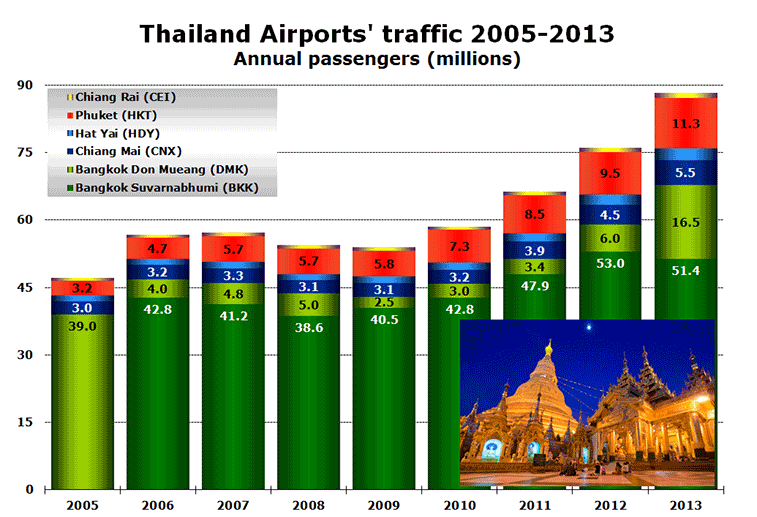 Looking at passenger data since 2005, the combined traffic of the six largest airports noted over 87% growth in 2013. In fact, traffic was up every year, with the exception of 2008 and 2009, when the country was affected by both the Thailand political crisis along with the global recession. Notably, Phuket was the only one of these six airports that managed to grow (1.4%) over the two years.

Bangkok’s airports maintained an almost 80% share of total traffic over the last nine years, which saw the majority of operations move from Don Mueang to Suvarnabhumi, when the latter was opened in 2006. As growing congestion at Suvarnabhumi started to become an issue (it was designed to handle 45 million passengers per year, but processed 48 million in 2011), the country’s government encouraged all LCCs, charter and non-connecting services to relocate back to Don Mueang.

Looking at Innovata schedules for this March, the top 12 carriers serving the Thai market account for over 75% of all weekly seats and flights respectively. The flag carrier, Thai Airways is still the dominant player, as it commands a quarter of seats to and from Thailand even though it decreased its weekly capacity by 5.3% when compared to the same week last year. The Star Alliance member, which carried over 21 million passengers in 2013 (according to Flightglobal), operates on a total of 81 routes, of which 11 are domestic services. Surprisingly, the flag carrier is the second biggest player on the domestic sector, behind Thai AirAsia, offering a 26% share of weekly seats. In addition, Hong Kong is Thai Airways’ most frequently served international destination with a combined four daily flights from Suvarnabhumi and Phuket. 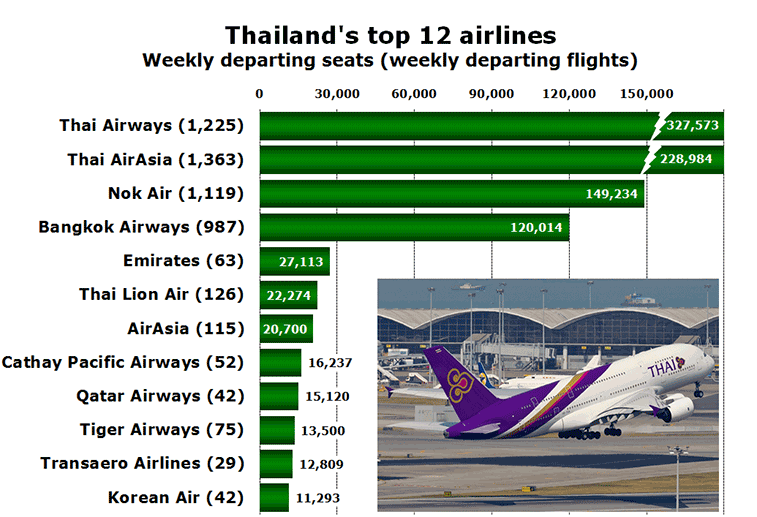 Total weekly seat capacity in Thailand has gone up 14%, with nine out of the top 12 airlines recording growth, when comparing data from this February with the same week last year. A new entrant into this year’s ranking, Transaero Airlines is also the fastest growing carrier, managing to increase its weekly capacity by 4,093 seats or 47% over the last 12 months. With the exception of Thai Airways, both Korean Air and Cathay Pacific Airways experienced capacity declines, with the latter recording the greatest reduction (-27%) in the past year, due to dropping its thrice-weekly flights from Suvarnabhumi to Mumbai and reducing its frequency from six times daily to 31 times weekly on the 1,712-kilometre sector between Bangkok’s main airport and Hong Kong.

While the domestic sector is Thailand’s largest market accounting for half of all weekly seats, a total of 56 countries can be reached non-stop from Thai airports according to Innovata schedule data. At over 84,000 weekly seats and 17% more than in March 2013, China is the dominant international market, being served by 20 carriers with a combined 452 weekly flights from Suvarnabhumi, Don Mueang, Chiang Rai, Chiang Mai, Phuket and Krabi. 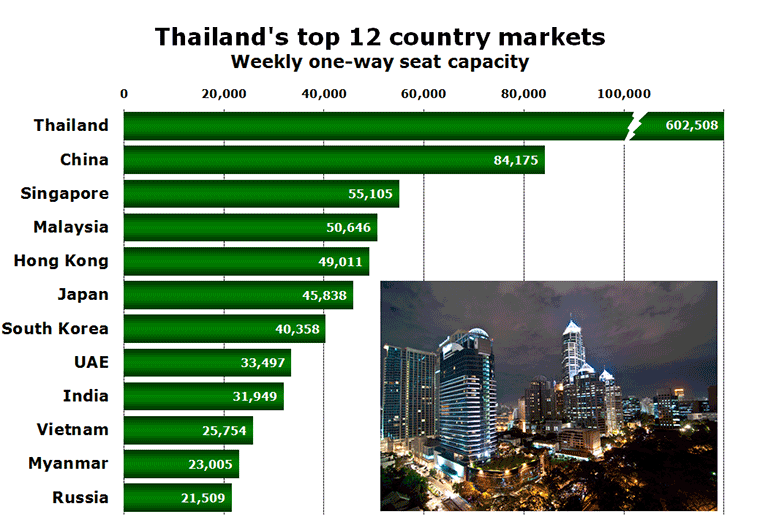 Both new entrants into this year’s ranking, Myanmar and Russia have shown the most significant growth in weekly seats, 47% and 34% respectively. Golden Myanmar Airlines, Asian Wings Airways and Nok Air have all started serving routes between Thailand and Myanmar over the last 12 months with a combined 32 weekly flights, with the latter airline commencing four weekly flights from Yangon to Don Mueang on 1 November. On the other hand, India has noted the greatest reduction when compared to the same week last year (-11%), due predominately to Philippine Airlines and Cathay Pacific dropping their twice-weekly flights from Bangkok’s main airport to Delhi and Mumbai respectively. 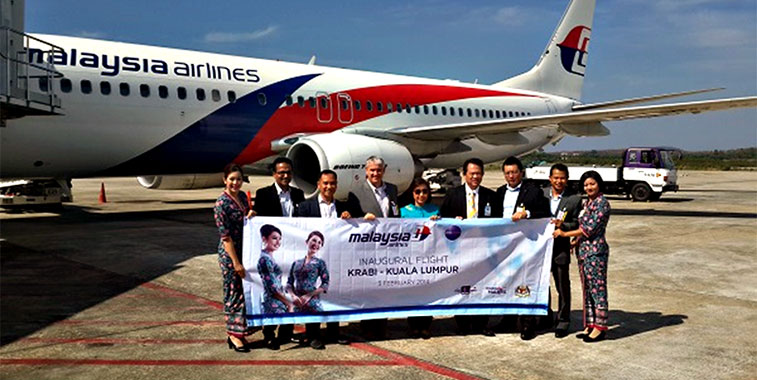 On 3 February, Malaysia Airlines launched four weekly flights on the 650-kilometre sector between its Kuala Lumpur hub and Krabi in Thailand, a popular holiday spot among Malaysians.