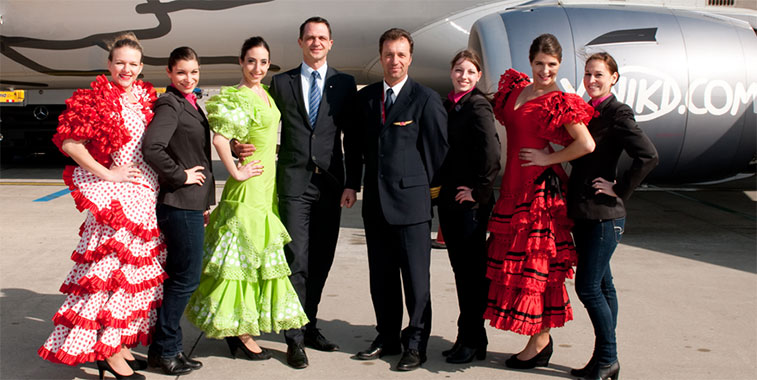 Last week’s launch of new services, operated by airberlin subsidiary NIKI, between Vienna and Madrid is likely to increase further Vienna Airport’s dominance of the Austrian airport market. Between 1996 and 2013 it has grown its share of the country’s airport traffic from 75% to almost 84%.

Based on analysis by anna.aero of traffic statistics at Austrian airports, the number of air passengers passing through the country’s airports fell by 1% in 2013 to 26.3 million. This follows three years of reasonable growth (8% in 2010, 6% in 2011 and 3% in 2012) culminating in 2012’s record throughput of 26.6 million passengers. Vienna’s dominance of the Austrian air travel market continues to grow. In 1996, Vienna’s share of passenger traffic across Austria’s six main airports was 75%. In 2010 this share surpassed 80% for the first time, and in 2013 had reached an all-time high of 83.5%. 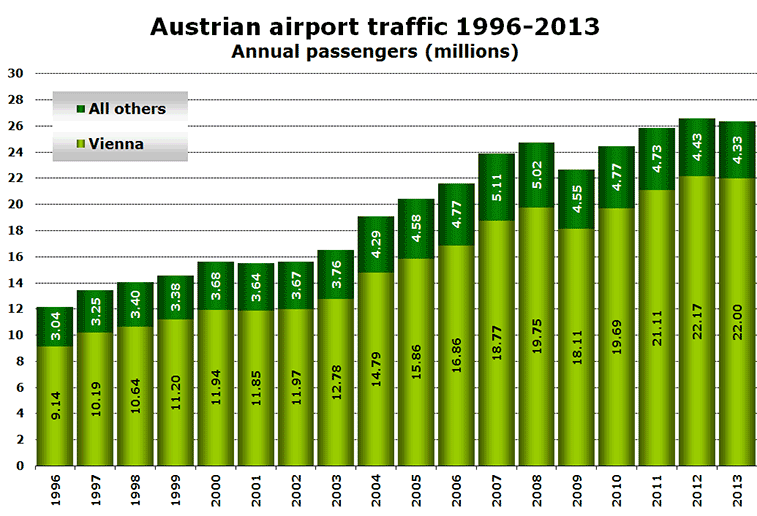 Austria has five other airports handling over 100,000 passengers annually, with Salzburg the next busiest airport after Vienna. Unlike Vienna, which has basically been growing steadily for many years, Austria’s regional airports have seen more significant year-on-year changes in demand, both positive and negative. None of the five regional airports reported record passenger numbers in 2013; Klagenfurt’s busiest year was in 2005, Salzburg’s traffic peaked in 2007, Graz and Linz reported their busiest years in 2008, while Innsbruck broke the one million passenger mark for the first, and so far only time, in 2010. 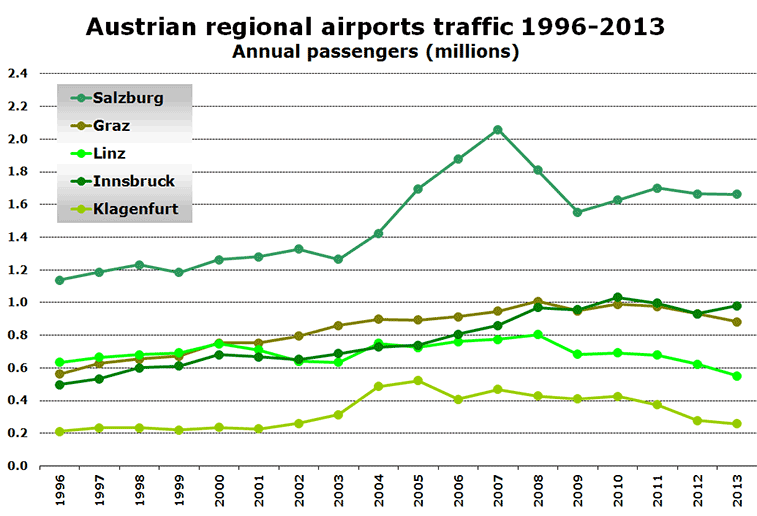 The decision by the Austrian government to introduce a flight departure tax in 2011 may have contributed significantly to the fall in passenger numbers at regional airports, which had been boosted by the arrival of various low-cost airline services. However, such taxes tend to deter low-cost airlines from developing more services, and often result in the termination of existing services.

Comparing traffic data for all six airports across the period 1996 to 2013, shows that while Vienna Airport traffic grew by 142%, passenger numbers combined at the other five airports grew by just 43%; with Innsbruck (+97%), Graz (+57%), Salzburg (+46%) and Klagenfurt (+23%) all reporting growth, but Linz passenger numbers last year were actually 13% below the figure for 1996.

The following table provides a summary of the most important new scheduled services that are currently expected to start operating into and out of Austrian airports between now and the beginning of October.

Once again, the focus is on Vienna, though based carriers Austrian Airlines and NIKI are only responsible for three of the 11 new services in the table. New services to Vienna will be provided by carriers from Algeria, Ethiopia, Italy, Russia and the UK. All of this is likely to contribute to Vienna taking an even bigger share of the Austrian air travel market in 2014.