Kjos you’re worth it (again). Norwegian nets in 4th US ANNIEs – O’Hare and Delta win big 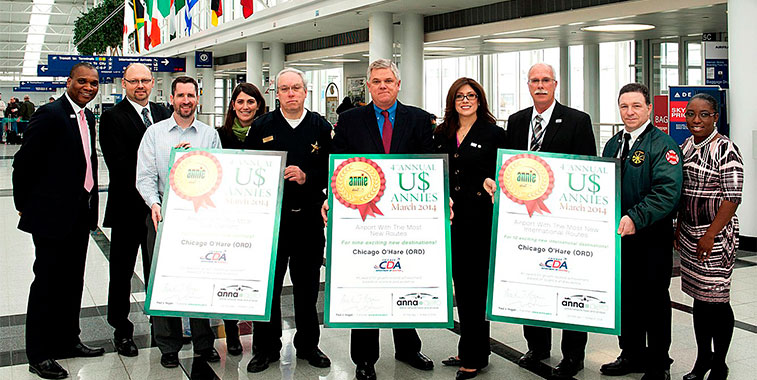 The US airline industry is having a sustained period of impressive profitability, but what impact is this having on route development at the country’s airports? The 4th US ANNIE Awards digs deep into the data to reveal the winners in seven airport categories and four airline categories.

Seven airports have won prizes in the 2014 US ANNIE Airport Awards, along with four airlines in the US ANNIE Airline Awards. Remember, these awards are based on science, statistics and evidence rather than people’s opinions (and votes). Using Innovata schedule data for December 2012 and December 2013 across over 630 US airports, our team of data elves have pored over the figures and we think we have again devised a more lucid way of rewarding airports (and airlines) that have achieved notable route and traffic related success in the US during the last year.

Unlike last year when Hawaiian airports won three of the four ANNIE awards for traffic growth, this year’s four main awards are spread across four different states in the US. However, including the runners-up in each category reveals that of the eight airports celebrating success, there are two representatives each from Florida, South Carolina and Texas, with one each from California and Louisiana. This year all of the airport growth awards are based on actual passenger statistics rather than capacity data, making them an ever more accurate barometer of which airports have seen the biggest increase in demand.

Houston Hobby Airport just beat its fellow Texan airport Austin-Bergstrom International Airport, to claim the prize as the fastest-growing airport handling more than 10 million passengers in 2013. Reporting passenger number growth of 6.4%, from 10.44m passengers in 2012 to 11.11m in 2013, Houston’s second airport just edged out Austin-Bergstrom which only moved up into this category this year by increasing its passenger throughput by 6.2% from 9.43m to 10.02m. Houston Hobby’s growth was driven by the network expansion of Southwest Airlines with new services to Boston Logan (BOS), Branson (BKG), Charlotte Douglas (CLT), Memphis (MEM), New York LaGuardia (LGA), Pensacola (PNS), Pittsburgh (PIT) and Washington Reagan (DCA), though services to Philadelphia ended in April. Apart from Southwest, the only other airline to start a new route at Houston Hobby in 2013 was JetBlue Airways which also launched flights from its Boston base. 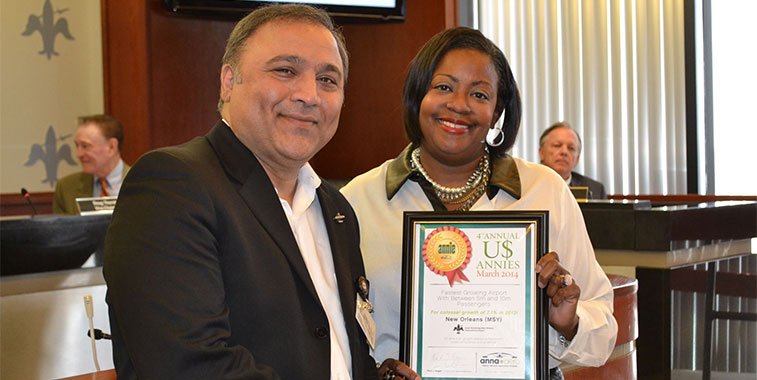 The battle was not quite as close in the 5-10 million passenger category where Louis Armstrong New Orleans International Airport took the US ANNIE by registering passenger growth of 7.1% from 8.60m to 9.21m in 2013, beating off Norman Y. Mineta San Jose International Airport, which saw its passenger throughput increase from 8.30m to 8.78m, an increase of 5.9%. New Orleans achieved its growth mainly through an increase in capacity on existing routes, as its non-stop route network increased only marginally from 36 to 37, with Austin, Key West and Milwaukee being added to the airport’s network, but Birmingham (Alabama, not UK) and Cleveland no longer served.

In the closest battle for victory in the airport growth awards, Charleston International Airport in South Carolina just beat off competition from Orlando Sanford Airport in Florida, to claim the prize in the 2-5 million passenger category. Charleston reported traffic growth of 12.4% from 2.59m to 2.91m in 2013, while Orlando Sanford’s growth of 11.9% brought it into this category, as its passenger numbers grew from 1.82 million in 2012 to 2.03 million in 2013. Charleston’s growth was triggered by the arrival of JetBlue Airways, who in late February brought Boston flights to the airport, while also adding New York JFK flights in competition with Delta Air Lines’ existing service.

In the smallest airport size category there was a convincing win for St. Pete-Clearwater International Airport (its new shorter name) in Florida, which not only wins the US ANNIE in this category thanks to passenger growth of 17.5% in 2013, but also passed the one million passenger mark, by handling 1,017,049 passengers last year. This easily beat the 12.3% growth in passengers reported by Myrtle Beach International Airport in South Carolina. It saw demand increase from 1.48 million to 1.67 million last year. St Pete’s victory was driven by Allegiant Air’s decision to launch seven new services from the airport during 2013; to Asheville (AVL), Elmira (ELM), Fargo (FAR), Sioux Falls (FSD), Columbus (LCK), Stewart (SWF) and Syracuse (SYR).

Airport with the Most New International Destinations

A clear winner in this category was Chicago O’Hare increasing the number of international destinations served from 50 to 57 between December 2012 and December 2013. New long-haul destinations that became available from the airport during the year included Berlin Tegel (airberlin), Doha (Qatar Airways) and Vienna (Austrian Airlines). Two new Canadian destinations (Saskatoon and Thunder Bay), and two new airports in Mexico (Huatulco and Morelia) were also added, along with Nassau in the Bahamas and San Salvador, the capital of El Salvador. Destinations that were no longer served were limited to Durango and Guatemala City, leaving a net gain of seven.

Trailing in some way behind with a net gain of four new international routes is Dallas/Fort Worth Airport. While services to Toluca in Mexico (provided by Spirit Airlines) ended in September, the airport welcomed new international services to Bogota (Colombia), Hermosillo (Mexico), Lima (Peru), Roatan (Honduras) and Zacatecas (Mexico) during the course of the year, all of which were operated by American Airlines.

Airport with the Most New Destinations 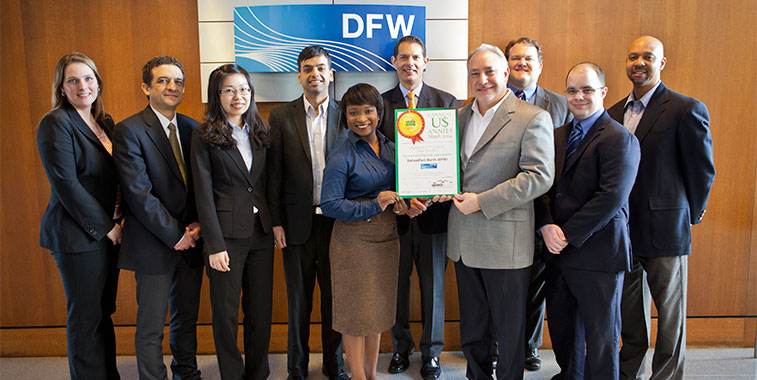 Proudly posing with their US ANNIEs certificate after securing their win in the “Airport with the most new destinations” category is Dallas/Fort Worth Airport’s team.

For this award schedule data for all of December 2013 was compared with the same month in 2012 to see which airport had the biggest net gain in destinations served. However, using December as the month for comparison means that some seasonal services, which may only operate at low frequency for a brief period, are included in this analysis. Chicago O’Hare with 209 destinations and Dallas/Fort Worth with 195, rank second and third in the US behind Atlanta with 223, while Minneapolis-St. Paul, with 154 destinations, ranked eighth based on figures for last December. 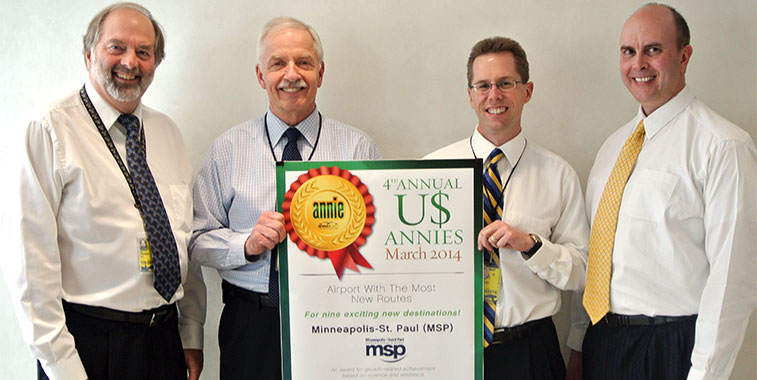 Airport with the Most New Airlines

Another success for the Illinois airport as Chicago O’Hare gained five new airlines during the course of 2013, taking the number of scheduled airlines at the airport in December 2013 to 59. In chronological order the airport welcomed airberlin (23 March), Qatar Airways (10 April), Austrian Airlines (17 May), Hainan Airlines (3 September) and Volaris (14 December) during a busy year.

Texas’ Austin-Bergstrom International Airport was the only other airport to achieve a net gain of more than two scheduled airlines in 2013, welcoming regular scheduled services from Aeromar (to Mexico City), Allegiant Air (to Las Vegas) and Virgin America (to San Francisco). This increased the number of scheduled airlines operating at the airport from nine to 12.

Airline with the biggest increase in the number of
US airports in its network: Allegiant Air and
Southwest Airlines

Two airlines at different ends of the low-cost airline spectrum share this award. Southwest, which operates nearly all of its routes with at least daily flights, drew with Allegiant Air, which typically starts most of its new routes with just two weekly flights. Looking at the airlines’ networks in December 2012 and December 2013 reveals that both airlines increased the number of destinations served by 11, with Southwest (not including AirTran Airways) now operating at 89 airports across the US, and Allegiant Air at 97. Among the airports to welcome Allegiant Air flights for the first time in 2013 were Austin-Bergstrom (AUS), Charlottesville (CHO), Clarksburg (CKB), Concord (USA), Islip (ISP), Manhattan (MHK), Oklahoma City (OKC) and Syracuse (SYR).

Airline with the most new international
routes: Delta Air Lines

To determine the winner in this category, schedule data for the whole of December 2012 and December 2013 is taken to determine which airline has reported the biggest net gain in international services from US airports. Applying this approach results in Delta receiving the US ANNIE for a net gain of 25 new international services, with the addition of 29 new routes and the loss of four. Fully 16 of Delta’s new international routes operated just once or twice in December 2013, compared with not at all in December 2012, suggesting that these are possibly extremely seasonal routes, maybe only operating around the Christmas and New Year period. Among the more high frequency, year-round international routes launched in 2013 were New York JFK-Quebec City (8 June), Los Angeles-Leon/Guanajuato (3 December), Los Angeles-San Jose in Costa Rica (1 July), New York LaGuardia-Bermuda (8 April), and Seattle-Tokyo Haneda (1 June).

Airline with the most new routes: Delta Air Lines

As with the previous analysis for international routes, the time periods compared are all of December 2012 and December 2013. Again Delta takes the award, beating off Southwest into a distant second place, thanks to over 80 airport pairs that operated just once or twice in December 2013 compared with not at all in 2012. Apart from the previously mentioned new, international routes, Delta did launch a number of high-profile, multiple-daily domestic services during 2013, including from Los Angeles to Portland (Oregon), San Jose (California) and Seattle, as well as between Philadelphia and Raleigh-Durham.

Biggest ‘new’ airline in the US market: Norwegian 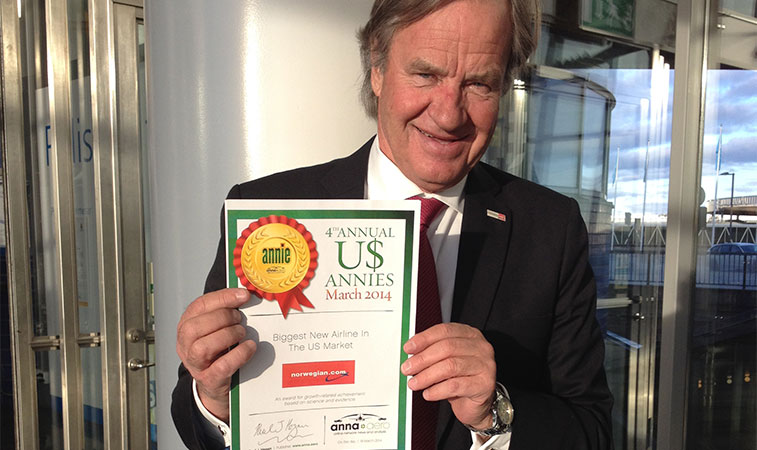 Holding the US ANNIEs award for “The biggest new airline in the US market” is Norwegian’s CEO, Bjørn Kjos, who was recently featured in a 30 second interview on anna.aero. “There’s great demand for high-quality flights at a low fare between the UK and the US, particularly to and from London Gatwick, where no other airline currently offers these routes. By launching long-haul routes between the UK and the US, we also get a stronger foothold in markets outside Scandinavia, which is a part of our strategy to expand internationally,” he commented as part of the airline’s further US expansion.

Ruffling a few feathers by setting up crew bases in the US, Norwegian easily beat Fly Jamaica Airways to be the biggest new airline in the US market in 2013. During 2013 the airline launched five US routes starting with Oslo-JFK (30 May), and followed by Stockholm-JFK (31 May), Copenhagen-Fort Lauderdale (29 November), Oslo-Fort Lauderdale (30 November) and Stockholm-Fort Lauderdale (1 December). All of these routes were launched with between two and four weekly flights. Further US expansion involving transatlantic flights from London Gatwick is planned for 2014.