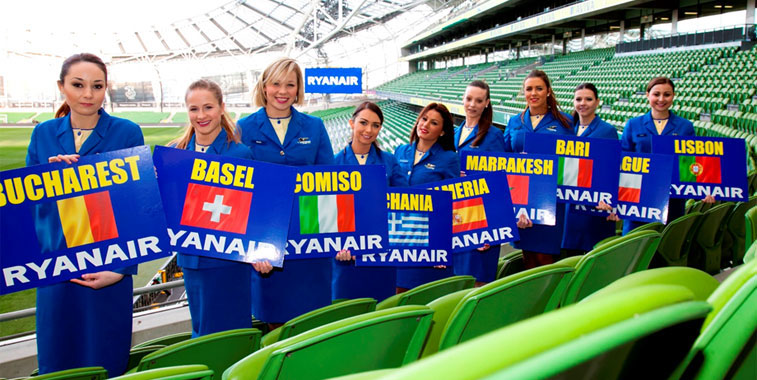 The launch of nine routes from Dublin, including its first ever service to Bucharest, as well as the return of Basel and Prague, will see Ryanair maintain its #2 spot at the airport. anna.aero forecasts the biggest airport in Ireland to get close to 22 million annual passengers in 2014.

Some might say that Dublin Airport has ridden the low-cost carrier roller coaster as much as any capital city airport in Europe. Home to Europe’s largest LCC Ryanair, or ULCC as it prefers, Dublin remains the carrier’s #2 base (trailing London Stansted and about 15% bigger than #3 Milan Bergamo in terms of weekly seats), despite a relationship which could have at times been called tumultuous. Couple that with the fact that the airport is also home for Aer Lingus, its biggest airline, which continues to flirt with a hybrid low-cost model (although still flying long-haul, having a regional partner airline etc.), Dublin has to deliver a product capable of satisfying these demanding customers, along with the likes of British Airways, Etihad Airways and all of the US majors.

2013 was a good year for Dublin, but still far from its best, however with nearly 6% growth, a critical milestone in the airport’s recovery path was witnessed — breaking the 20 million annual passenger figure again — a feat first achieved in 2006. Ireland’s economy was ravaged more than most in the fallout of the 2008 global recession, with 2009 and 2010 traffic numbers reflecting the tough decisions made by the Irish Government all the way down to individual households. 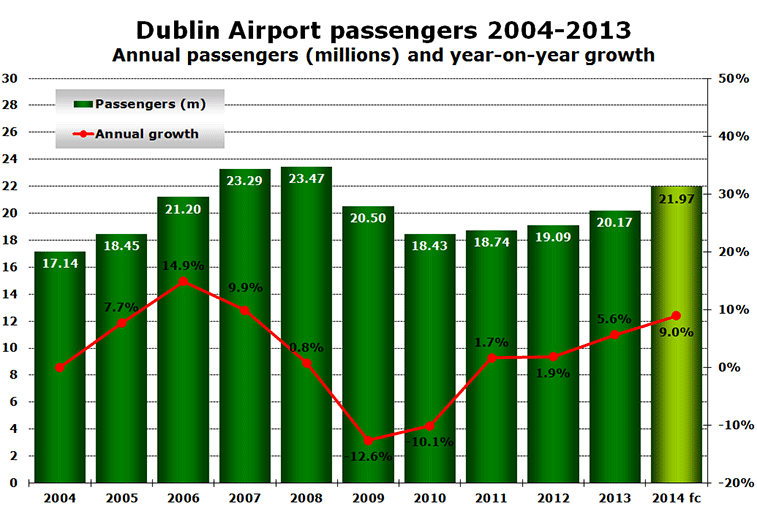 In terms of the prospects for 2014 traffic levels, another year of solid growth seems on the cards. Looking at schedule data for a week in August 2014 versus the same week in 2013, this would suggest annual seat growth of 3.5%. However, looking at traffic data for January and February 2014 taken from anna.aero’s European Airports Traffic Trends database, Dublin has averaged nearly 9% increases so far this year. If the airport continues on this growth trajectory, then it will get close to 22 million passengers this year, a landmark volume only achieved twice before (2007 and 2008).

SVID’s appraisal of Dublin is “good”

Entering Dublin’s monthly passenger data for 2013 into anna.aero’s Seasonal Variation in Demand (SVID) calculator, the airport performs well, producing a score of 4.80, giving it a “good” rating. Against its airport peers from Ireland, its 2013 score is marginally better than Cork (6.73 – good). However, when compared to Ireland’s third largest airport, Shannon, it performs significantly better than the 1.4 million annual passenger facility, which scores 11.79, giving it a “poor” result. Since we started doing SVID scores using 2013 traffic figures, anna.aero has now evaluated 15 airport’s seasonality performance, and Dublin has entered the rankings at #9 spot overall, lodging itself between Bucharest (3.71) and London Luton (4.95). 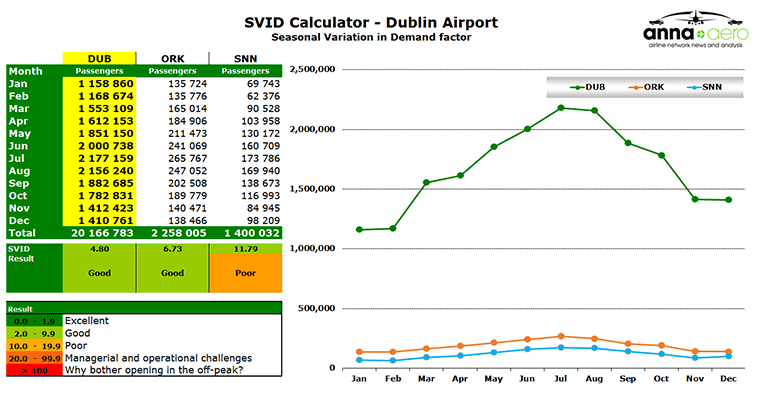 Most of FIGUST set for growth

Despite, the expected ‘maturity’ of the FIGUST nations (France, Italy, Germany, UK, Spain and now including Turkey), five out of six country markets will see robust annual growth in 2014 at Dublin, with the UK being the only declining market (-6.4%). Germany (+13%) has the edge over Turkey (+12%) in terms of being the fastest growing, however the remaining FIGUST markets have all recorded notable capacity increases of between 5-10% in the last year. Had this analysis been performed for 10-16 March 2014, the US would have been in #2 spot, the Netherlands and Poland country markets would have been bigger than Italy, and Canada would not appear at all, as all of its flights operate summer-only. 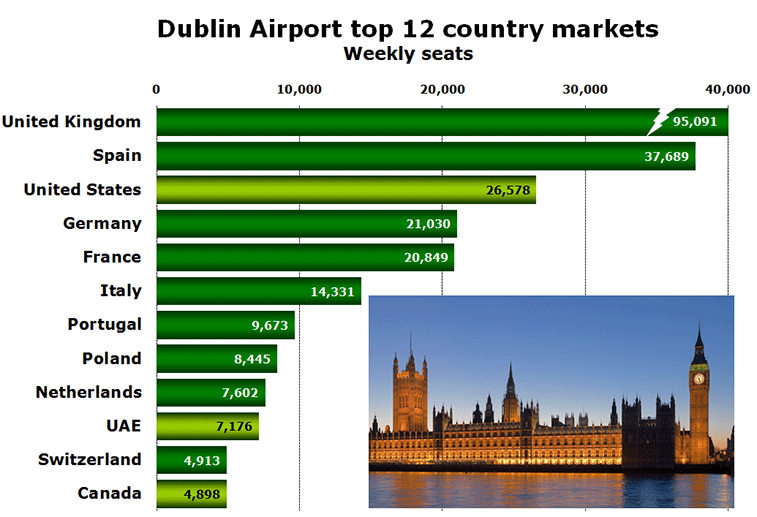 Of the three non-European markets (highlighted), it is Canada’s performance that is the most noteworthy, having jumped from #14 to #12 (ousting Belgium, which saw seats fall by 12% year-on-year) between August 2014 and August 2013, courtesy of an 83% increase in weekly seats. The reason for this capacity spike is due to Aer Lingus starting daily services to Toronto Pearson on 21 April (a route last served by the airline in 1979!!), as well as WestJet’s Toronto Pearson (via St. John’s) daily service beginning on 15 June. The US’ 10% annual growth will no doubt have been helped by the launch of Aer Lingus’ five times weekly service to San Francisco (last operated in S09) on 2 April.

80% of seats controlled by big two

Little has changed over the last 12 months in terms of the dominance of Aer Lingus (-0.8%) and Ryanair (+0.4%), with their combined share of Dublin’s weekly seats dropping slightly from 80% to 79.6%. Overall, the top 12 airlines have seen their share fall from 94% last August, to 92% this August, a positive sign for the airport, which will have 29 serving scheduled carriers this summer, as it did last year (according to Diio Mi data). 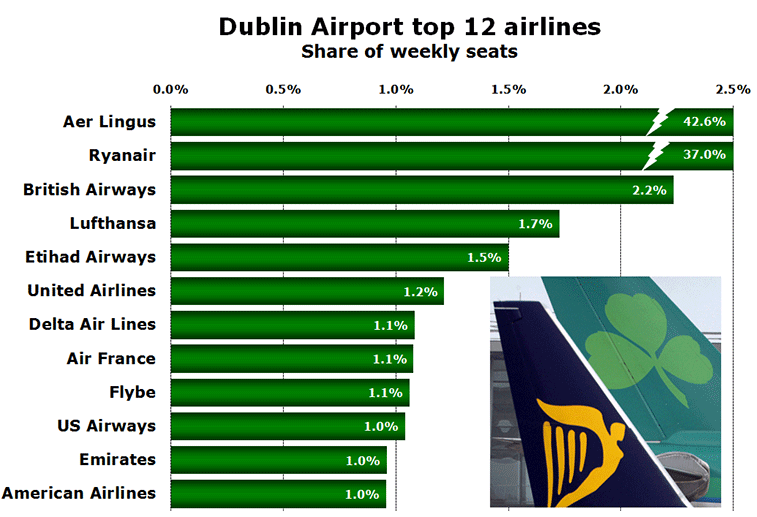 Airlines operating in August 2013 which will not make an appearance this summer are: Germania; SATA; and Travel Service. Newcomers for S14 are CityJet (flying four times daily to London City under its own code (WX), rather than for Air France), WestJet (15 June) and Luxair (30 March; last operated in January 2012). Interestingly, the combined share of US Airways and American Airlines, once merged, will catapult the new, larger airline in fourth spot, just behind British Airways.

Looking at anna.aero’s New Route Database, there is likely to be plenty of cakes and fire truck water arch activity at Dublin over the next few months, with 17 new routes expected to launch. Like it does at so many of its airports, Ryanair leads the way with 10 new services, with Aer Lingus adding another four points to its Dublin network portfolio.