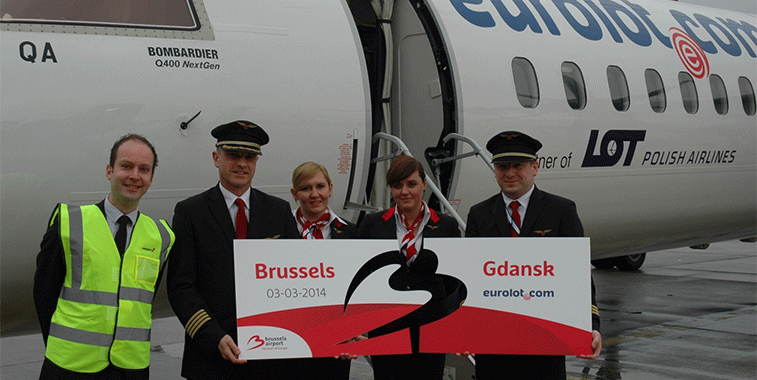 Earlier this month Gdańsk was linked to Brussels by eurolot with a four times weekly Q400 service. The Polish carrier will further boost passenger numbers at another regional airport in the country on 1 April when it plans to start another link to the capital of Europe, this time a thrice–weekly route from Wroclaw.

After last week’s analysis of the Austrian airport market, this week anna.aero takes a closer look at developments in the Polish market. Coincidentally, total annual passenger numbers in the two countries are remarkably similar, with just over 25 million passengers passing through Polish airports last year, up an estimated 2.1% compared with 2012. However, unlike in Austria, where the country’s main airport has been growing its share of the total market, the opposite has been true in Poland, where Warsaw Chopin’s share of total traffic has fallen from around 75% in 2000, to just over 40% in recent years.

The growth of traffic from Poland’s regional airports can be attributed in large part to Poland’s accession to the EU in May 2004. As a result, several low-cost carriers such as Ryanair, Wizz Air and to a lesser extent easyJet, started new services from the region, competing with the likes of short-lived local LCCs Air Polonia (December 2003 to December 2004) and centralwings (February 2005 to October 2008). 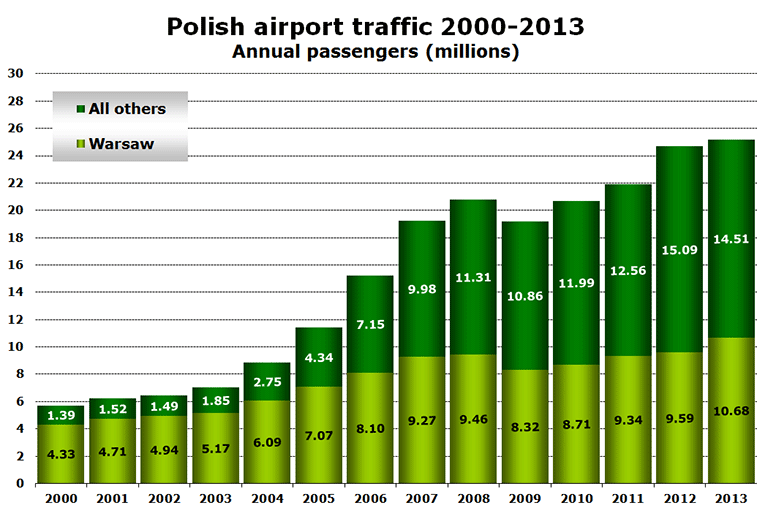 While passenger numbers at Chopin more than doubled between 2003 and 2013, and in the process breaking 10 million for the first time, demand across the country’s other airports increased almost eight-fold from less than two million to more than 14 million.

Among Poland’s five major regional airports, each of which has been handling over one million passengers per annum since 2008, Kraków has remained the biggest for the last decade, and is the only other airport to see more than three million passengers in 2013. Gdańsk regained its third place ranking in 2012, which it had lost to Katowice in 2004 (when Wizz Air opened its first base there). 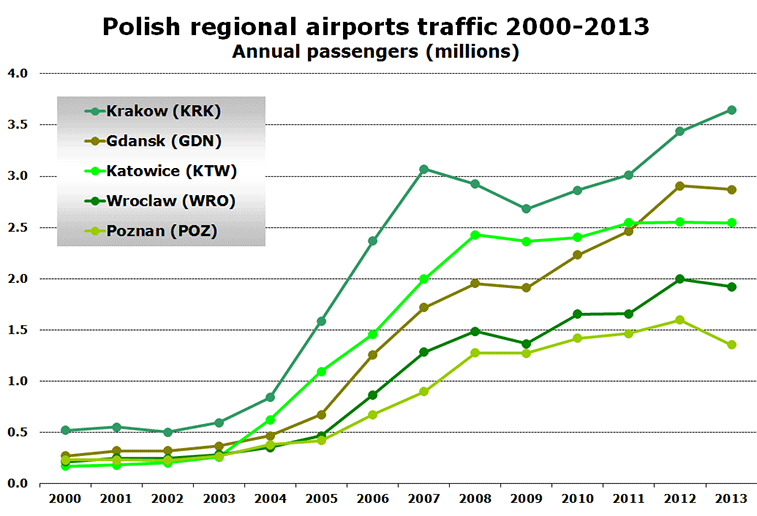 New airports at Modlin and Lublin

In addition there are a further six airports handling at least 100,000 passengers annually, with two of these (Warsaw Modlin and Lublin) having opened in the last couple of years. After a hectic first few months in 2012, Modlin had to close for a significant period while it sorted out issues relating to its runway and its ILS system. Having initially welcomed substantial operations from both Ryanair and Wizz Air, following the closure the latter decided to remain at Chopin leaving Ryanair as the dominant carrier at Modlin this summer. 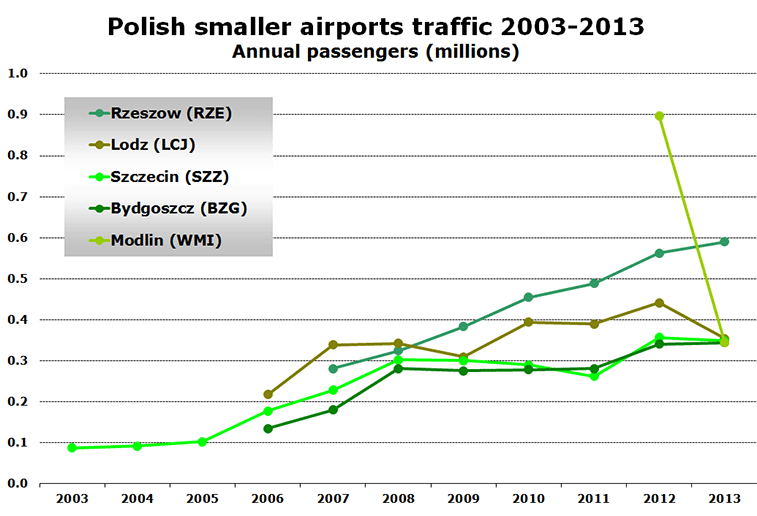 11 different airlines will be launching 22 new services from Poland’s airports over the coming months, including: Alitalia’s re-launch of Milan Linate to Chopin (last served in September 2009); Adria Airways’ resumption of Ljubljana to Chopin (last served in September 2011); Air Serbia re-starting Belgrade to Chopin (formerly served by JAT in April 1999); and two re-launches from Brussels Airlines (with Kraków last operated from Brussels in January 2013 and Chopin previously flown in October 2012).