Spring Airlines celebrated the launch of its maiden flight from Osaka Kansai to Shanghai Pudong on 15 March with a 10-person ribbon-cutting ceremony. The airline’s daily flights will face intense competition from five other carriers on the route operating a total of 10 daily flights.

With bases at both Shanghai airports — Hongqiao (SHA) and Pudong (PVG) — as well as Shenyang in northeast China and Shijiazhuang, Beijing’s new gateway airport, Spring Airlines is China’s largest low-cost airline. We last looked at Spring in August 2010, and since then the airline has grown its weekly seats and flights by over 60%, and the number of destinations served has grown from 37 to 54. According to its website, it is still the only LCC in China – clearly it does not acknowledge the existence West Airlines, a Chongqing-based daughter company of Hainan Airlines, which launched in 2010. Despite this ‘disagreement’, the numbers speak for themselves (Innovata data for 25-31 March), as Spring offers nearly twice as many seats as West Airlines. However, to put Spring’s operating scale into some context, it flies around 15% of the weekly seats that Air China offers, 12% of China Eastern Airlines’ and just 11% of China Southern Airlines’.

Spring’s top 12 airport bases currently command 71% of the LCC’s near-1,400 weekly flights. This figure has reduced from 74% over the last 12 months which gives a clear indication that Spring is using its current 20% annual capacity growth to diversify its network, and reduce the reliance on its Shanghai bases. Indeed, despite a 3% hike in weekly flights at Hongqiao, and a 25% increase at Pudong, these two airport’s share of the carrier’s weekly flying has fallen from 37% to 34% since last March.

Serving new international markets is making up a steady component of the airline’s capacity increases, with flights Luoyang to Hong Kong, as well as Shanghai Pudong to Kaohsiung and most recently to Osaka Kansai, its fourth Japanese route. That said, outside of China, Spring only serves eight country markets, with Cambodia (Siem Reap), Malaysia (Kota Kinabalu), South Korea (Jeju) and Taiwan (Taipei and Kaohsiung) having been added in the previous 12 months. 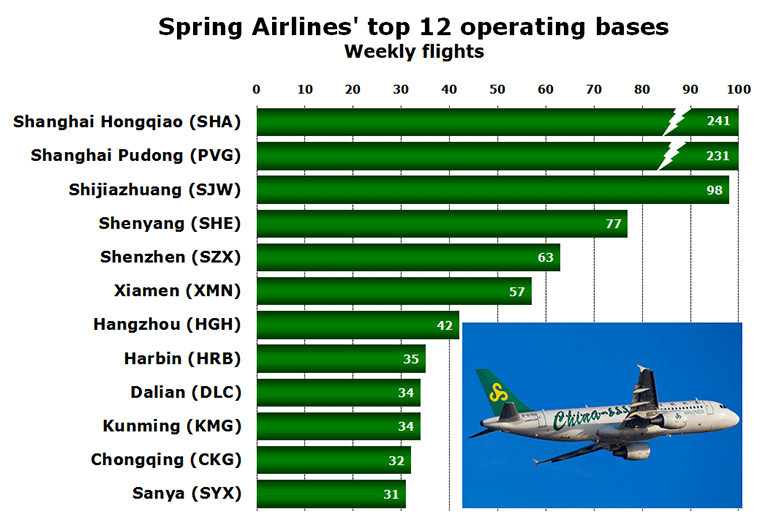 While Pudong has witnessed the largest increase in net weekly flights (+46) over the last year, in terms of percentage growth it is Shenzhen and Hanghzhou (both +200%) that have seen the largest capacity increases, and in the process moved them firmly into Spring’s top 12 airports. Only two of the current top 12 have seen reductions in weekly flights — namely Chongqing (-8.6%) and Sanya (-6.1%) — however it is perhaps the precipitous decline of Guangzhou (last year’s #6 airport) that is the most noteworthy, dropping by 33% year-on-year and falling out of the top 12 to #13.

Unsurprisingly, it is Spring’s two Shanghai bases which dominate the LCC’s largest routes by weekly seats, with the Shenyang to Hangzhou (highlighted) airport pair being the only sector not to feature either Hongqiao or Pudong. In March 2014, the top 14 airport pairs represent 20% of the airline’s weekly capacity commitments, down from 23% in March 2013, further echoing the airline’s trend towards a more diverse route portfolio. 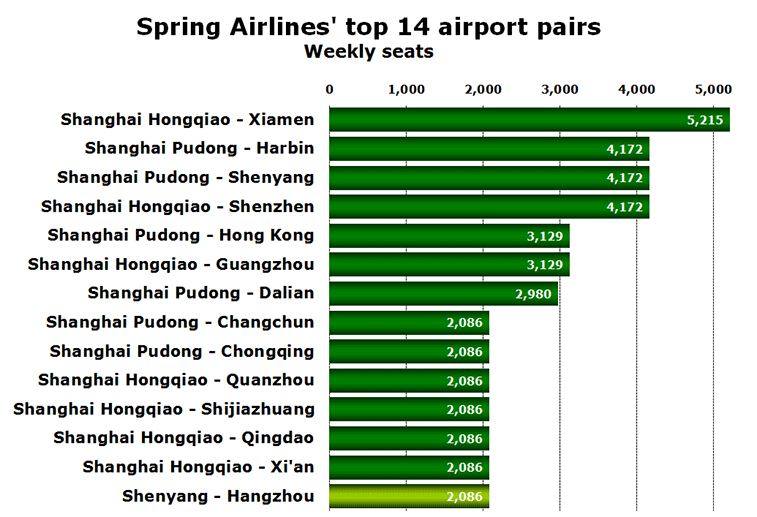 Three routes inside the top 14 (all new entrants) over the last year have all seen a doubling of their respective weekly seats — all of them from Hongqiao — to Sanya, Quanzhou and Qingdao. Cuts on Hongqiao to Guangzhou of 40% (which had previously been the airline’s joint highest route served with five daily flights) and from the same Shanghai base to secondary hub Shijiazhuang of 33% have clearly freed up capacity for the increases to these top 14 new entrants mentioned above. Five of the top 14 routes remain unchanged in terms of weekly seats year-on-year.

New services noted in anna.aero’s New Route Database to start later this year are currently all international and include four times weekly operations to Chiang Mai in Thailand, as well as twice weekly to Da Nang in Vietnam, both from Pudong and both starting on 31 March. A daily service to Singapore from the airline’s Pudong hub will also begin on 25 April, along with a twice-weekly route from Shijiazhuang to Taipei Taoyuan.